In the 1960s, with a sniff of commercial radio in the air, a number of enterprising folk across the Country, not least those in local press, thought the whole thing sounded pretty exciting.  Companies were duly formed, with the aspiration of operating a franchise for this prospective new medium. Few of those far-sighted enthusiasts had any idea quite how long they'd have to wait.

In Birmingham, such a company was Birmingham Broadcasting Ltd. With Elvis Presley at Number One, and Macmillan at Number Ten, it held its first Board meeting in March 1961. The records of that meeting were neatly typed on foolscap and have been kept safely to this day, along with those from all the subsequent early gatherings.  They live in a weighty black volume which was uncovered recently in a clear-out at Free Radio.

Allow me to flick through the dusty pages.  The inaugural minutes suggest there wasn't a tremendous amount of excitement at that first gathering. It amounted to formal agreement on Articles of Association and bank accounts. The directors were also fairly unlikely to squabble, given they were both also directors of the Birmingham Mail group.

Directors’ reports and accounts were duly approved at successive 'meetings' of BBL - monthly - for the next ten years.  The only excitement loomed when one of the directors acquired another directorship, possibly as a result of just being bored of waiting.

October 1972. Following the change of Government from red to blue, things started to move, and commercial radio became a real possibility.  David Pinnell was duly appointed Managing Director, swiftly joined by John Russell, and John Parkinson, both of whom were to figure in the history of commercial radio in the Midlands for several years.

The application to the IBA for the franchise was duly assembled. Then, on 30th November 1972, the directors met and agreed ‘after some discussion’ that the application document (I've summarised it on that link - it's fascinating!) should be submitted to the regulator as part of the competitive pitch.  John and David were congratulated, rightly, on its ‘form and presentation’.

January 1973 must have been a nail-biting meeting, likely with several trolleys of tea being pushed into the board room, alongside a plate of Penguin biscuits.  Whilst the application had been submitted, nothing further had been heard, although an interview was expected in ‘two or three weeks time’.  The Board appeared confident, however, with much of that meeting dominated by prosaic discussion on how staff might be recruited and equipment leasing.

6th February 1973 was little better.  The minutes suggest that the first meeting with the IBA regulator on Jan 31st had proceeded satisfactorily, but a second one was anticipated.  The board remained ‘hopeful of the ultimate outcome’.  A query on the positions of the Mail Directors on the Board had evidently been raised at interview: a letter had been despatched to the IBA and a response received.

One Board member suggested, wrongly as it transpired, that only one other licence application was expected.  Possibly whilst kicking their heels, conversation at the meeting then turned to pension arrangements.

12th March 1973. Was the sherry brought out from the MD’s cabinet?  The Chairman reported solemnly that the Company had been awarded "the contract for Independent Radio", on certain conditions, including the requirement that a member of the rival Birmingham Independent Radio consortium be invited to join the Board.  Back then, such IBA marriage-broking was commonplace, and often sensible. 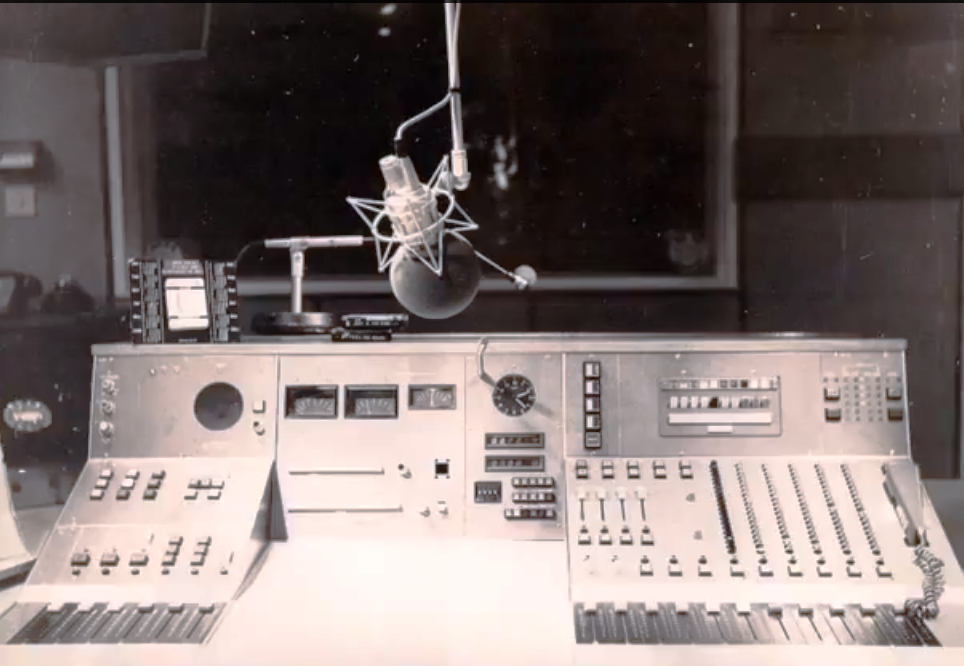 It was also agreed that a nominal fee would be paid to the Chief Engineer until such time as he began full time employment.  I should imagine they rather needed his goodwill and commitment.  By the Board meeting of April 73, an on-air date of 1st April 1974 was being mooted, although 1st February ‘might be achieved’.  History tells how they improved upon their more cautious estimates.

By November 1973's Board meeting, things were hotting up. David Pinnell reported that work on the Aston premises appeared  to be progressing satisfactorily. The third and fourth floors of the former ATV/ABC premises at Aston would soon be completed; and then work could begin on the studio complex.  A worry was expressed that overtime might have to be worked.  The minutes go on to reveal that a generator had sensibly been acquired, at a cost of £2200. Staff would move to Aston on 8th December, and the premises would be operational from the 10th.  The Board was chuffed that orders for £25,000 of ad sales for the first three months had been processed.  In a touch of light relief, although I suspect there were a few interventions along the way, John Russell took the Board through the programme schedule.

January 1974. The calls on capital continued; and the money came in. Sadly though, there were no new developments "with regard to the staff canteen".  Morale was reported as good ‘despite the lack of a lift”.  The programme schedule had been submitted to the IBA, although the regulator had not yet responded. Indeed, concern was expressed that if it were generally to take the IBA six weeks to consider any changes in programmes, the industry should press for a ‘more flexible approach’ to regulation. Later, it did. Boy, it did.

News was discussed, and the Board was assured that there would be a ’newsman’ on duty 24 hours a day, despatching a 5 minute bulletin every day on the hour and a 3 minute bulletin on every half hour . The Sales Director, Mr Davies was a little less sanguine. He noted a few airtime order cancellations owing to the ‘present economic crisis'.  Incentives for advertisers were wisely created.

25th February 1974. The station was now settled on-air; and the Board met to review those breathless early moments.  It had all gone well “despite the breakdown of the IBA transmitter”. Sounds pretty terminal to me. Views from the non-exec directors on programmes were invited (always a dangerous move, I find). "Professional" said one; “phone in shows were refreshingly different” added another; and Mr Howard was ‘"impressed with the excellent reception as far south as Stratford". Maybe he lived there. 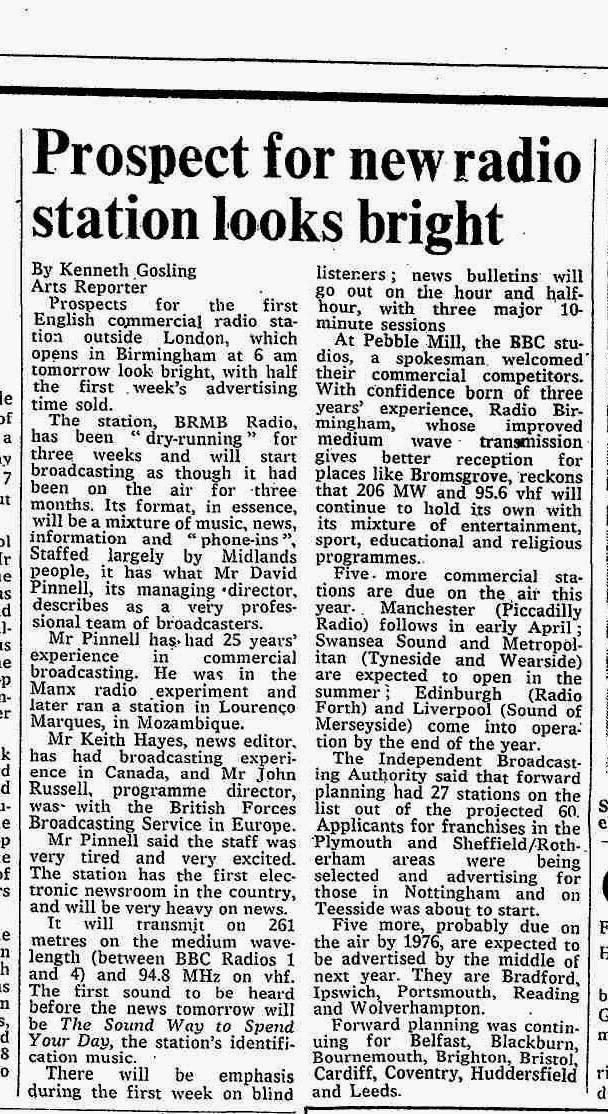 The Sales Director was peculiarly positive for a Sales Director, reporting that £40000 was on the board for the first six weeks on-air. One director asked for a graph of this progress, only to be told that "this method had not been used at the moment" and to be content with the "record of future orders maintained by the accounts department".  In other words ‘I’m trying to get a station on-air, don’t go asking for pretty graphs just now’.

The Programme Director reported that the switchboard had been “jammed with calls”, not least for Tradio where people could "sell or swap household articles". The news staff were ‘full of enthusiasm’; not least because news gathering, news-writing and news reading were all performed by the same individuals. ‘Conventional journalists’, it was observed, appeared to quite enjoy that challenge.

The Chairman had written cautiously to the IBA asking what their attitude would be and how '"they’d be prepared to help" in the event of the economic crisis resulting in revenue not being ‘at satisfactory levels’. No response was detailed.

A "detailed discussion" was held on the sales bonus scheme. Some things never change.

In other news: a staff bonus of 15% of monthly salary would be paid to all staff in March to say thanks. Commercial production was proving a challenge owing to the huge volume of work; the engineers wanted another engineer; and the Record Library needed an assistant to file away the Bay City Rollers records.  Those extra moves might cost another 7k a year. If all else failed, it's lucky the Bank had authorised a £40,000 overdraft facility.


Thirteen years. And the dream had become a reality.  The first commercial station in England outside London was on the air.

Interested in what it was like inside early commercial radio? Grab my own personal memories of those days in the book 'Radio Moments'