In Praise of the Tape Cassette 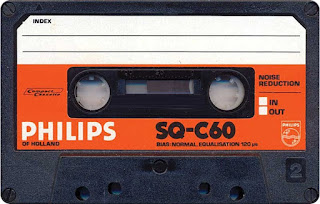 Kenny was unbelievably excited as a kid when he was given his second tape recorder as a gift.  Radio anoraks will understand how enjoyment was amplified manifold with a second machine. One machine meant you could record and play; two enabled you to copy and mix.

These were simple times. The Radio Times was printed on toilet paper; Morecambe and Wise ruled on the black and white telly; and Ed Stewart broadcast on Christmas mornings on medium wave from a magic carpet.  But most importantly, yes, these were the days of audio tape cassettes.  A devilishly clever transparent plastic box housing a plastic gubbins laced with mucky brown tape.

The sight of an audio cassette excites a generation even now. Would it be a C60, C90 or C120? The latter could accommodate an entire edition of the BBC's Top 20 chart show, but it was frail and could die without warning. Would it be a bargain ASDA version, or a more resilient TDK, Agfa or Philips one. An old colleague reminds me he once interviewed the BASF Chairman, who was a little perturbed to find that his company, the largest chemical producer in the World, seemed best known for its cassettes.

The pause button on the cassette machine was a boon. It allowed we anoraks to record the bits in between records almost seamlessly, so we could assemble hours of 'bits of radio'. A clip here, a favourite presenter there, spiced with a great jingle with the beginning cut off.

Playing through those cassettes now, it’s annoying to find the promise of a priceless piece of radio begin before it’s chopped off in its prime in favour of a jingle you’d already heard a million times.

Mind you, direct recording with an actual wire lead was a significant advance from the analogue method of simply holding the mic next to the radio speaker. Treasured recordings were accompanied by Mother yelling you down for tea, your brother squealing or the dog barking.

We’d assemble playlists of our favourite songs on cassettes.  Before the days of ‘shuffle’ the song order would be imprinted on our minds. Whenever one familiar melody cropped up on the radio, you’d be inexplicably surprised when a different one followed.

Cassette boxes were an artform.  Some teenagers would neatly design them with Valerie Singleton enthusiasm using a rainbow of felt tip pens.  Others would just label illegibly, next to a second scribbled-out note of the tape's previous contents. 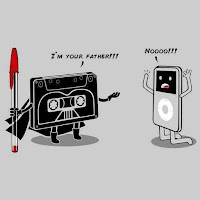 Many cassette machines were battery-powered.  Record something with an ailing battery and it'd play back at double speed when you'd saved up enough pocket money for four new Ever Ready U2s.  I recall one listener once phoning up the music library at Trent asking deliciously tetchy librarian Jane to identify a song he'd recorded thus. Hilarity ensued.

Theoretically, one could splice on a tape cassette, but alas, the survival rate was low. You'd only do it usually if the alternative was cassette-death.  Such an operation was conducted with forensic care, using a special kit from Woolworths comprising an editing block with two metal levers, a razor blade, a baby screwdriver and some magical white sticky tape. Sellotape did work, but the prognosis was diminished further. A pencil was deployed to twiddle round in the hole to rein in escaping tape.

Those treasured old cassettes, secreted in boxes or crinkly old carrier bags, still just about play, provided a cassette player can be found.  As the tape disintegrates, however, much of the oxide is left on the tape heads and our fond childhood recordings sound as if played through a sock. I'm aware that 'the oven trick' can be used to restore reel-to-reel tape, although I fear cassettes may just melt. 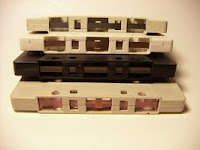 With vinyl making a comeback, and even CDs enjoying a resurgence as people crave some physicality and audio 'ownership', maybe it's time to hail the official revival of the C60. May I suggest Adele release her next album on cassette only? And may I have a triple pack of blanks in my stocking?

Radio is not just for Christmas, it's for life.  Please buy my book for a friend this Yule. Proceeds to the Radio Academy
at December 16, 2015