What Have We Learnt from BBC Radio 1? 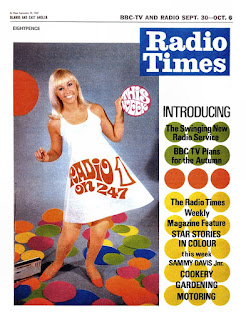 The intrepid organisers of this year's Student Radio Conference invited me to speak about 50 yrs of Radio One. That was kind.

Much as I would have thoroughly enjoyed reminiscing fondly in front of the bored faces of bright young things, I thought it might be more useful to use the Radio One story - then and now - to illustrate a few radio 'truths'.

There’s a time and a place to launch a radio station.  Seizing the zeitgeist gives welcome momentum. The 1960s was ripe for a spirited spunky rebellious upstart.

Identify a poorly-served and sufficiently large market. In the '60s, life was simple. No-one was targeting younger listeners, save for nightime Radio Luxembourg. Now, Radio One still attracts over a third of 15-24s, listening, on average, for over six hours each - and around a quarter of 10-14s. It's not a shoddy achievement - in such a different world.

Understand your audience. There is no doubt that Radio One at launch - and now - has its particular audience front of mind and goes to pains to understand how they live their lives. Derek Chinnery, Radio One Controller 79-85, described One's audience as "a man working in a small garage...two or three mechanics clonking around with motor cars but have the music on...And then there is the dreaded housewife figure who I think of as someone who, perhaps last year or two years ago, was a secretary working for a firm, who is now married and has a child. She wants music that will keep her happy and on the move.”

Draw upon the best influences. Steal. Don’t be shy.  Radio One targeted the old pirate audiences and it chose as its model not the original pirate station Caroline, but the polished US-backed Radio London. Where can you learn from - at home, around the world and in different media?

Sound as if you’ve always been there. As Arnold barked and Blackburn said hello on Saturday September 30th 1967, he sounded as if you’d joined him when the party was in full swing, but a party at which you felt immediately at home. Great stations never sound like an exclusive club.

Get on the right platforms. Whilst FM spectrum was available in '67 - and shortly to be used for the first BBC local stations - FM ('VHF') sets were rare. Radio One broadcast only on AM at launch - universally available on the cheapest radio sets - and where the audience had found its pirates.  The BBC, however, fell behind the curve on eventually finding FM spectrum for Radio One, much to the chagrin of its Controller. It is now usually ahead of the game.

Brand confidence. Radio 1 has usually led rather than followed. It's what makes you distinctive.What do you stand for?  Is it an aspiration with real listener appeal? Do your listeners know that distinction the second they tune in - by what you say and DO?  What listeners infer about you is what your brand really is.

Look for the best talent in the right places and try them out. Radio 1 at launch took on a swathe of ex-pirate presenters, already well-known.  At a time when few were likely to be offered gigs elsewhere, it had the luxury of being able to offer a bundle of short term contracts whilst it polished its plans.  Since then, the Radio 1 talent machine has always excelled and sought to identify the right places for the candidates it needs to position the station where it desires. It's now plugged well into university radio, the music world and social media content creators. 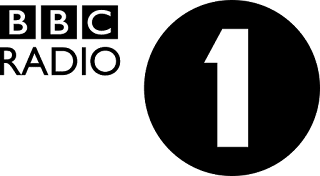 Good looking talent. Even in its early days, Radio 1 identified that it needed to look good as well as sound good. 24-year old Tony Blackburn was a pin-up. Via TOTP, appearances, its presenters were in vision long before the digital days.

Get the visuals right.  Wonderful Radio 1 in '67 looked fabulous in a swinging London. Through its ages, it has always updated its visual identity just enough.  Through the red white and blue seventies through to the more serious positioning of the '90s and today.

Great stations now care about how they look - and Radio 1 almost always has. Its roadshow quickly looked the part, at a time when many of its  commercial competitors cared little about how they expressed themselves off-air.

Great on-air imaging.  Some stations just identify – others truly image. Radio 1 has always done the latter – from the fine work from the World’s then greatest jingle company, PAMS in '67, to the array of impressive production houses it calls upon today from Wise Buddah to Contraband or Daniel Mumford.

A remarkable breakfast show is critical – the best at what it does.  Breakfast shows make a real difference – and some great stations even concede that their flagship show may not  be entirely on-brand – but close enough. The breakfast battle is a different one from the rest of the day. Blackburn, Read, Smith, Mayo, Edmonds, Evans, Moyles. 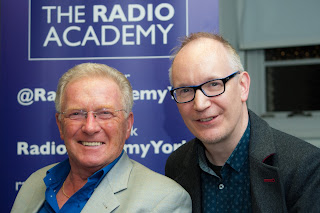 Some presenters don't suit breakfast. As the great Mark and Lard and Steve Wright illustrated - you can be an inventive, gifted jock, but find breakfast a peculiar gig. Some presenters are not at their best at the crack of dawn - and listeners sometimes just can't tolerate at breakfast what they can handle in other dayparts. It's not your fault.

Manage the talent well. Radio 1 has not shied away from making use of talent who might be a tad challenging on occasions. That's no reason not to hire them. It just needs talented management who fight the corner for the likes of Everett, as Johnny Beerling did, or Moyles. Show them love and support them - but know when to move on decisively.

PR and 'Statement Moves'.  Radio One has usually managed its image with care. Throughout history, whether it's 'banning Quo', 'ditching jingles' or the trumpeting of talent on the schedule who send off the right message at the right time, it's all helped.

'Brand me'. Most up-and-coming jocks now already have an image and impressive social media presence before their first major radio berth. Similarly, the early Radio One presenters also brought their own followings and were careful to portray their image with care. Relatable enough - but aspirational enough too.  The mate you'd love to have.

One thought - one link, said a notice on the wall of Radio One as it fought against a growing commercial sector.  In breakfast radio on busy commercial stations, that’s a tough call, but the objective is sound.  Do one thing well – and your link will be remembered. 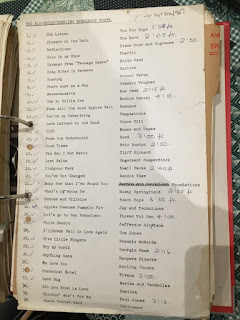 Get the music right. Early Radio One producer Tim Blackmore confessed to me that he, Johnny and Tony dreamt up the original Radio One breakfast music policy (see pic), based on the American-inspired music policy of pirate Radio London. Music scheduling is more sophisticated these days - and the insight available into music trends and consumption ever more detailed. A coherent approach, fuelled by the best intelligence, interpreted by the best brains.

Ratings by day - reputation by night.  Radio One was king of this at its height - when the biggest ratings were the key objective. The great specialist shows maximising off peak audiences - and adding credibility to the brand - but not lessening daytime share.

Evolve the brand. Radio One learned the hard way, in the mid nineties at a time when politics had no patience, that audiences don't like revolution. Elsewhere, relative stability has been a hallmark of Radio One - and listeners value that. But do worry about what your audience think of you - and worry about what the target might think of you in five years' time.  Adjust with care and take the listeners with you.


Grab one of my books:

Radiomoments: 50 years of radio - life on the inside