Who's Listening and How - the Latest 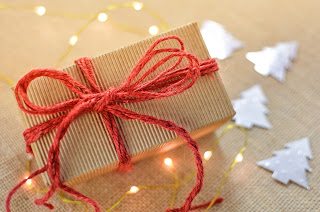 It's tempting to wrap up and send a copy of the latest MIDAS survey to every press columnist  for Christmas.  This jolly publication from the Rajar folk always offers some interesting data, which often contradict many of the assumptions from those innocents with the temerity to pen articles about our beloved medium.

In September, the intrepid researchers re-contacted just over two thousand of the long-suffering folk who'd already filled in a Rajar diary to dig deeper into their listening habits. We should thank Ipsos for their valiant efforts.

How is radio being consumed – and how are those methods of consumption trending?

Despite all the hullaballoo, live radio still commands an impressive share of ear-time for UK citizens. 75% of all the stuff on which we feast our ears - from online music streaming and podcasts to ‘listen again’, CDs or battered Agfa cassettes – is good old live radio. Everybody else’s share of that ear-cake is surprisingly about the same as two years ago, with only another 2 percentage points of live radio’s time being scattered across the many other options.  On-demand music streaming (OMS) accounts for 8% of adult ear-time now - and its consumption is daytime-led and male-driven. 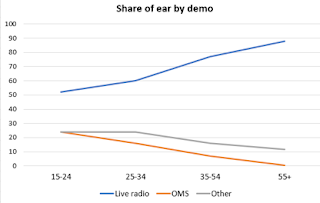 The picture changes by demo, of course.  Although a very healthy 82% of 15-24s do seem equipped to turn on a live radio, they appear to get bored pretty quickly.  Only around half of  the ear-time of messy-haired 15-24s is taken up by live radio – compared to 77% for 35-54s. As can be seen, on-demand music streaming (OMS) is the single biggest villain eating the breakfast of those 15-24s.

The couple of standard Rajar radio audience graphs (below) indicate that live radio’s weekly reach generally amongst 15-24s has declined from 90% at the turn of the decade to 83% now, against a reassuringly stable 'all adult' figure. 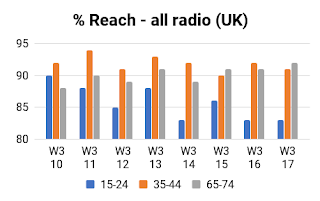 Weekly time spent listening amongst 15-24s across those years, however, has fallen a hefty 16% in that time down from  17 to 14.2 hours per week. 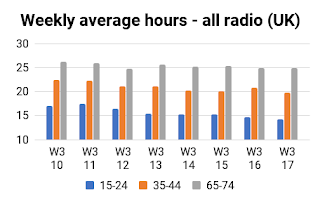 Back to MIDAS, podcasting only accounts for a small slice of all ear-time –  although taken together with listen again, it now accounts for 4%, much the same as last year. That’s certainly not shoddy for this thing with a funny name and it looks set to grow slowly - but it's not exactly disruptive. Podcast listening is younger than its 'listen again' sister - and more male.

If you draw a straight line graph based on the FM decline, which would be utterly foolish, FM dies out in the year 2036 - by which point Judi Dench will be 102. The UK was late to join the FM transmission party – but it’s lasted us over 60 years already, so let’s not moan. 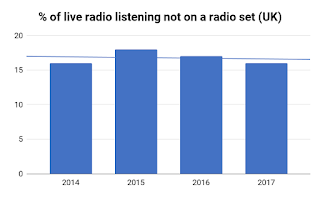 Maybe strangely, the amount of live radio consumption which is not on a radio set has stayed about the same (16% in 2017) across the last four years.

Around half of adults now have a radio app on their phone - about 8m more people than three years ago. Penetration amongst the demos are bouncing around – but overall amongst all adults the figure rises from 35% in 2014 to 49% in 2017. Perhaps as smart phones have become more affordable, the 15-24s have been catching up with their 25-34 balding brothers. Whatever 2018 brings in our changing and worrying World, we can relax knowing we’ll likely hear the news that many more Brits have a radio app on their phone than don’t.

We once paid non-listeners to listen to our station as part of a focus group exercise. One recalcitrant trotted back in the following week in a frayed crimson parka to say they couldn’t find us on their telly. Listeners expect you to be everywhere – and it’s an expensive business for our industry. AM/FM radios are unsurprisingly the most ubiquitous gadgets which people turn to - followed closely behind by DAB radios. 11.6% do use their TV for at least some of their listening. But to turn a stat on its head – just to make again the point that radio listening remains more traditional than folk think - 90% don’t listen to any live radio on their smart phones.  So – they may have a radio app on their phone – but they are not thumbing it too frequently.  Can we do more about that? 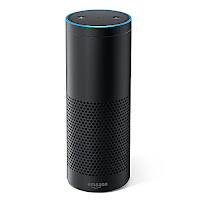 OK Google, we really should applaud smart speakers and buy everyone one for Christmas.  ‘Cos when it comes to using those, people are far more likely to ask Alexa to play a radio station than any other form of comparable audio entertainment (58% of device eartime). On i-pads and smart phones, folk are much more likely to get up to all sorts.

Although it accounts for but a pint-sized proportion of radio listening time and by currently just 1.1% of adults - there is something hugely encouraging about the love affair between radio and smart speakers. The biggest - and most distinctive - radio brands will win - and current radio operators may or may not be running those. Analyst firm OVUM suggests 40% of homes will be 'smart' by 2021.

Radio remains a one to one medium. 51% of all adults suggest they listen to radio on their own, with 20% saying they listen with their partner.  Amongst the less -coupled 15-24s, there are a wider variety of possibilities -  just 43% listen alone, but 11% with families and 32% with colleagues

In-car listening is interesting. MIDAS suggests that whilst a majority of adults will choose to listen in on the move (57% reach), the share of listening attributed to those travellers is much less than columnists might expect, being outshone by the amount of time people listen whilst working or studying.  I often wonder whether we programmers take into account sufficiently when our light and heavy listeners are most likely to be with us.

Overall, MIDAS suggests, if you picture your listener serving an angry customer, reading a physics text book, driving to Ingoldmells, eating a microwave meal, scrubbing the grill pan or just chilling – then you’ve accounted for about 90% of all listening.  The column headings indicate, however, no-one has sex whilst listening to the radio. Most off-putting if it's your own voice-tracked show.