How Indignant May Eddie Mair be on Commercial Radio? 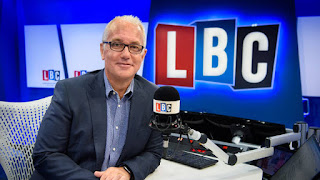 As Eddie Mair slides off his sticky BBC headphones for the last time and hands over his lanyard, what will he be thinking?

With due respect to his many accomplished colleagues who have hosted PM frequently and excellently, it is Eddie who has defined the immaculate style of the programme in recent years. Even when he enjoys a scheduled day off, one can still hear his ghostly shadow in the cue-writing.

In his Radio Times column he just said it’s time for a change – and insists it is nothing to do with the various BBC pay issues. One imagines he has grumbled over the years as much as anyone about Auntie’s weird ways – and also loved her for a million more reasons.

Now, LBC calls - and Eddie appears content to be associated with it.

It is a huge tribute to Global Radio for building LBC into the respected titan it is today. Although one imagines the company’s FD still scratches his head about the costs and revenues, thankfully the music brands are sufficiently successful for the parent company to regard the station as something which has a broader value beyond specific profits.

As Eddie falls into his pristine silver LBC chair and assumes presidency of the station’s telegenic main studio, he will know that for the first time, the BBC editorial guidelines may be forgotten. Ofcom alone will now rule.

Will that make a difference?  Eddie will determine his LBC persona and he may stay just as he is. After all, there has always been a real authenticity about his presentation. That’s why listeners liked him: they felt they knew who he was.

But one felt he was maybe just straining at the leash – getting away with mischief with a glint in his eye. On LBC, the leash is off and Eddie can go running into the adjacent field and chase the sheep - should he wish. We know that LBC likes its presenters to stand for something - and expends some degree of effort in squeezing the BBC-ness out of some prospective recruits.

How different are the rules?

The BBC requires that “due impartiality...and...a breadth and diversity of opinion...so that no significant strand of thought is knowingly unreflected or under-represented....fair and open-minded when examining evidence and weighing material facts".

Furthermore, “not influenced by outside interests, political or commercial pressures, or any personal interests”. “Our output will be based on fairness, openness, honesty and straight dealing.  Contributors and audiences will be treated with respect."

The BBC even goes beyond what the Charter requires – requiring due impartiality to all subjects. Not just matters of public policy or political or industrial controversy, but controversy within religion, science, finance, culture, ethics and the like.

In news itself – the rules remain familiar across BBC guidelines and Ofcom’s Code. Both the BBC and Ofcom require that “News in whatever form must be treated with due impartiality”. The word ‘due’ is scattered across all broadcasting rules, meaning not necessarily equal proportions but 'due weight' – so minority views are not necessarily afforded equal weight to the prevailing consensus.

The BBC requires “a breadth and diversity of opinion...fair and open-minded when examining the evidence and weighing material facts".  Furthermore, ”audience responses should not be given a wider significance than they merit and we should take care not to misrepresent the relative weight of opinions expressed...appropriate scrutiny to audience opinions and ensure that the debate does not appear closed to members of the audience who support a minority view”.

There is specific provision in the BBC guidelines about highly controversial ‘major matters’, where the different perspectives are more rigidly implemented, as there are in the Ofcom Code.

What of the individuals? The BBC worries not only about reality – but about “perception”.  "Our audiences should not be able to tell...the personal prejudices of our journalists or news and current affairs presenters on matters of public policy, political or industrial controversy, or on 'controversial subjects'".  They may provide evidence-based judgements, but not personal views, including online. "The public expression by staff and presenters of personal offence or indignation risks jeopardising the BBC's impartiality."

So. It's official. Eddie may now be as indignant as he fancies.

Little wonder how liberated Robin 'The World Tonight' Lustig felt as he left the BBC "When I started writing my post BBC-blog, I discovered the angrier I sounded, the more widely read my blogposts were".

BBC programmes are additionally covered by much of the Ofcom Code too, so the below will always have been in place for Eddie - but now, they are the sole requirements.

Whilst the BBC is petrified about ‘perception’ of bias any personal presenter interest may generate, Ofcom simply demands that the presenter tells us the score. "Any personal interest of a reporter or presenter, which would call into question the due impartiality of the programme, must be made clear to the audience.” No-one is misled about Farage’s perspective.

“A personal view...programme...must be clearly signalled to the  audience at the outset”. Ofcom adds helpfully: "(Personality phone-in hosts on radio are exempted from this provision unless their personal view status is unclear)"

I guess, therefore, if Eddie is to adopt a stance on things, he needs to make his status clear pretty swiftly.  I can rustle up some idents if he wants any fitting sweepers: “Eddie’s a raving leftie/rightie/liberal who favours soft/hard/no Brexit and supports/hates/not really bothered  about another Heathrow runway”.

Ofcom requires that “no politician may be used as a newsreader, interviewer or reporter in any news programmes unless, exceptionally, it is editorially justified". In that case, "the political allegiance of that person must be made clear to the audience”.

Due impartiality outside news bulletins is the biggie. Ofcom requires** that "due impartiality on matters of political or industrial controversy and matters relating to current public policy" be preserved "within a programme or over a series of programmes". 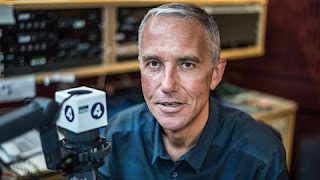 Under Ofcom, “presenters of “personal view” programmes may “express their own views on matters of political or industrial controversy or matters relating to current public policy”. However, “alternative viewpoints must be adequately represented either in the programme, or in a series of programmes taken as a whole”.

Additionally, “presenters must not use the advantage of regular appearances to promote their views in a way that compromises the requirement for due impartiality. Presenter phone-ins must encourage and must not exclude alternative views”.

LBC does all this with distinction. Not only are there clear differences across the schedule in tone and approach, a wealth of views are heard within, often lending powerful and personal insight. Some idiot tweeted me suggesting that James O’Brien’s producers filter the callers so that no contrasting views are heard.  If only they saw the smile on a presenter’s face when a caller spits blood about what's been said.

LBC treads a careful path and has famously recruited a rainbow of politicians to present programmes. When programmer Martin Campbell was at Talk Radio UK in the 90s, and I was a regulator, he was keen to do much the same there, although LBC has developed the policy with aplomb – seizing the headlines and creating compelling radio. It has not descended into a succession of shouty right wing hosts, as in other countries. The approach is unique and beautifully British.

The BBC demands "respect" of contributors. That word is not in the Ofcom Code. Contributors to commercial radio do have a right to fairness - to know what's expected, the context, the general topic and the like - but not your actual full-blown "respect".  If Eddie wants to say "Boris Johnson, you're a nasty piece of work" he can. Not that anyone stopped him saying it before on the BBC, in that delicious way of his.

One imagines Eddie's regular listeners, having discovered how to re-tune their radiogram, may be in for a shock or two, though, and Ofcom may have to cancel all holidays.

Overall, there are differences - principally in how free Eddie can be in having his own stance - and to express himself more in other media - but it's more about authenticity than bias.

Rules aside, a rich layer of Corporation caution gilds the BBC guidelines, contrasting  with LBC's agility and challenger nature - a position they manage brilliantly.

I hope we hear more of his humour on LBC - and I hope he gives something more of himself. We know just enough about James O'Brien and Nick Ferrari to care about them, but Eddie has traditionally not wanted to say very much about what makes him tick - and I'm curious. From his book, I know he is not a fan of radio awards, worries about technology and made Doris Day cry.

It will be fascinating to hear him unbridled. His style and tone will likely evolve and six months on, he will sound different from Day One. But one expects that even at this moment - as he mops his brow and titivates his herbaceous border - he's jotting down clever asides he's been dying to say for years.

** I have taken LBC to be a national digital sound  programme service, not a local service