Is Radio Falling Behind in Commercial Creativity?

I wandered into John Lewis today. And Partners. Just buying some smelly room diffusers lest unexpected smiling visitors descend at Christmas bearing a jaunty carrier bag of equally unexpected gifts. You just need to have something to hand over in extremis, don't you?

Elton was playing softly in-store. It’s a little bit funny. This feeling. Inside.

Oh gosh. How joined up is that beautiful JL & P campaign. A poetic TV ad which chimes emotionally – supported by enviable media spend, pre-empted by ITV programme sig-tunes played on the old Joanna the night before - the TV ad set created in-store - and they evidently briefed the chap on the PA system.

And - frankly – Iceland also pulled a stunning coup this year too. ‘Banned ad’ is the oldest trick in the book – but now its amplification can really bring dividends. And don't even start on Professor Green's powerful yet simple social media campaign for his new song 'Photographs'.

Advertising has never been quite so exciting.

TV, bound by more restrictions than radio, and later to the party in more integrated commercial offerings is doing some stunningly original stuff which attracts genuine interest.

Outdoor too, OOH, once the province of peeling paper on the grimy brickwork of a railway arch is now a multi-media dynamic presentation.

Podcasts are innovating, adopting the radio spot models instinctively in the media’s early days, but realising now the comparative power of the presenter live-read.  It’s suggested listeners like a brand because it has helped deliver favourite content.

Radio is in a hugely exciting place. Are we keeping up? Not least because we do emotion better than anyone.

First, we have the spot ad. Some are exceptional. Well-written, capitalising on radio’s strengths - maybe using storytelling and clever writing - then well-produced with the right casting and fitting music which adds value and helps recall – plus all the other tricks that canny producers understand. Done well, there’s always a place for great spot creative.

It just seems such a shame to put these masterpieces in a four-minute ad break, where they risk being lost.

Other ads don’t sound quite so polished. Just maybe they still bear some resemblance to their roots in 1930s radio drama or shouty font 48 in a press ad. They certainly don’t engage.

Then we have the sponsors.  Whilst lovable meerkats josh in the Coronation Street credits, we have ‘the station voice’ booming that a time check is brought to you by a puzzlingly unrelated sponsor. Why? Yes, say the name enough and it may be remembered, but is that really the way to help a listener love the brand?

And then with 9 or 10 different clients mentioned in the ad spots, you hear a travel sponsor followed by a programme sponsor?  Call me stupid, but I can’t remember any more than four drinks at the bar, let alone a list of a dozen advertisers.

No longer may advertisers expect attention purely through the size of their wallets. They need to deliver inherent relevant value. 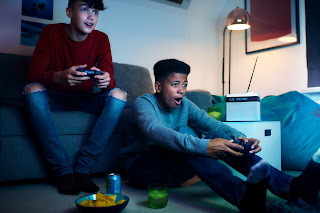 In my Orion Media days in the West Midlands, the smiling Adrian Serle as sales director was ahead of the curve. He insisted on devising a theme to a major client brief. A theme we then exploited with a creative radio concept in which presenters were involved on-air, supported by rich, relevant social media and whatever else - from street activity to designing their bus rears.  Gifted programmers like David Salt and Mike Newman delivered the radio elements impeccably – making sure that the listeners derived value. We weren't the biggest station in town - but we often won business against the clever folk who were.

I sat in focus groups months later – and heard fond recall of great commercial programming content – attributed to the client by name.

How much more attractive is that than just repeated mentions? Both listeners and clients smile. I know we are not the only teams who created something so special. Witness Classic FM's recent impressive 'music for dogs' on bonfire night - or Absolute's work with Wickes.

As the World changes, do we really think that UK radio is going to get the place in agency minds it richly deserves if we simply carry on just delivering volume but not engagement? Interminable ad breaks, dull contests, and uncomfortable random sponsor lines.

And, frankly: "go online to win" is not terribly compelling radio.

Now the Ofcom rules allow us to be as creative as we like, why are we so often still doing it the way we used to in 1990?

If we launched commercial radio today, with platforms approaching BBC equivalence as they now are, would we garner our current levels of audience if we delivered such a cavalcade of clumsy commercial content? No. Our legacy audiences have become acclimatised to it.  Future audiences will not be.

2005 brought us the Capital venture when ad minutage was reduced to six or even five minutes per hour. It didn’t last long. Ralph Bernard’s temple still throbs when he explains why he did what he did. There were sound reasons.

What would happen now if one commercial radio group or new entrant decided to do things differently? Fewer spot ads. Fewer commercial campaigns - but each one of them truly original.

Unlike many other countries, the dividends have a ceiling in the UK - thanks to a mainstream public service rival which has no ads. You could risk adopting a fresh approach to commercial content – yet still not penetrate sufficient incremental audiences to render the approach viable. But - would it set you apart - reap heightened rewards for clients - and deliver long-term future value for your business? Maybe.

As canny ad agencies, prompted by the sexy on-demand audio sector start to look at the power of audio, I hope we can begin to make some headway in persuading that radio plays its role with fresh, unparalleled creative solutions. Capitalising on the simply unique relationship listeners have with their station – and their presenters. There are acres of coverage of presenters' antics these days - and yet stations are failing to use that connection as they devise solutions to client briefs.

If we just carry on just playing production-line ads for a quarter of the hour and shouting out laboriously ill-framed sponsor lines, I fear for our future. You are killing our industry.

What was the one missing element in the delivery of the Elton theme for John Lewis?