A Coronation in colour 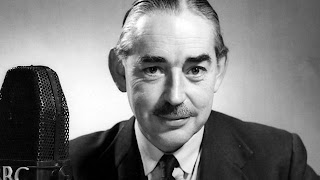 Twelve million listeners to a single broadcast is quite an achievement.  Despite the Coronation's TV appeal, these many millions chose not to view the occasion sat cross-legged on the lino in a neighbour's front room, watching in black and white on a flickery small screen fired by an H-shaped aerial,  but to relish instead the radio commentary.  With many years of experience under their belts, the BBC radio commentary was always to be in colour.

The Palace had agreed for the cameras to be present, against  opposition from a reluctant Cabinet, who worried that TV would be an "intrusion on a sacred event".  Nevertheless, it was the radio executives who played the key role in  the year of preparation for the overall broadcast coverage, for radio was still seen as the 'lead medium' for this, the largest single-day event ever organised by the BBC.  There were those, however, who suggested this was the last moment when that would be so: the Observer told of someone who'd commented snidely that "sound radio will die next Tuesday at 10.15 in the morning on the dot".

Even for radio though, TV had its uses.  Monitors were installed so that radio commentators might enrich the scope of their narrative.

Coverage was to be given in 41 languages.  Microphones had to be discreet; and permission 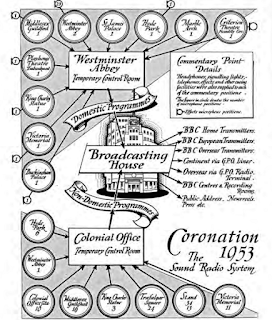 was just given for two British and one French commentator to be located within the heart of  the Abbey.  A further nine stood poised  along the five and a half mile return  route.  It was clearly a demanding day for the engineers too, an additional 1300 circuits being secured from a state-owned GPO (BT); and presumably lots of Gaffa tape to ensure no courtiers slipped over a stray cable.  Plans were sensibly made too for the recording of all outputs, with additional bulky magnetic recording machines hired for the day. The battery ones were seen as unsuitable: who wants to miss a key moment owing to a flat PP9.

It was to be a day of simulcast for the BBC Home and Light programmes (Radio 4 and 2), with only the Third Programme doing its own thing.   The radio day began at  530, with  'Music Whilst You Wait'  replacing 'Music While You Work'.  Likely a clear case of a working programme title making it to air. The programme proper began at 1015. 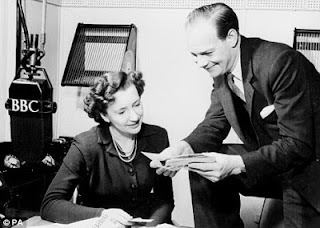 This was the premier commentary league, brought up in a Reithian regime when words were all we had.  Whilst so many of today's radio broadcasters are thrown into commentary only in extremis, these characters were accustomed to conveying every sight, sound smell and mood; peppered effortlessly with relevant facts from a bottomless fund of knowledge.  To this day, the skill lives on in radio sports commentators; and it is interesting that so many of those chosen to commentate on the Coronation had that very background.

The words of the young Queen were aired at 9.00 "Throughout all my life and with all my heart I shall strive to be worthy of your trust"; alongside those of Churchill, who'd valiantly opposed TV's 'intrusion'.  By the evening, in a bid to rally a celebratory spirit around the World, the programming adopted an international flavour, with a 'Coronation Day across the World' programme.  Geraldo and his Orchestra played late night dance music from Lille; and contributions were mixed in by the Bakelite controls variously from a cafe and from a party in the British Embassy.

Coverage was relayed around the World; albeit some broadcasts were not handled with the reverence of the suited British commentary.   In a commentary gap, one American commentator, maybe playing the role of an LBC caller, asked if the whole event was "just put on by the British for a psychological boost to their shaky Empire". 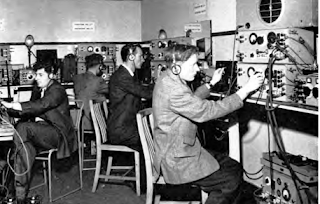 Despite TV ruling the roost back home, the Times reported the following day that, globally, radio enjoyed "immeasurably greater numbers", with 'excellent reception" being enjoyed.  The newspaper generously dubbed this 'picture in sound' as "broadcasting at its best".  It observed that commentators "concentrated on conveying the atmosphere by giving their own wholehearted vent to their own reactions to it".  Howard Marshall was praised for his  'blend of historic reminiscence and description" which "exactly suited the occasion".  John Snagge "performed the most difficult of its tasks with incomparable skill and taste".  The Times concluded the sound broadcast was "technically perfect".  Just maybe this was the last ever radio broadcast scrutinised in the press to this degree until the launch of Radio 1. 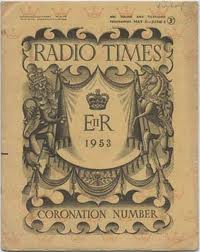 The Radio Times back then was printed on that cheap paper you used to crayon on at school. Not the shiny TV Times paper.  The Coronation edition cost just the usual threepence; and sold nine million copies. That probably explains why your grandma has a yellowing copy in her loft.

So. 11.7 million listeners in the UK, according to special BBC research, although I suspect its methodology may not pass muster with Rajar.  It concluded, nevertheless,  that 92% of listeners felt they were "satisfied".  The remaining 8% did not trouble to grab their Basildon Bond to complain: 3,000 letters of commendation were received. Rightly so.

Whilst the Observer leader in 1953 had opened by quoting those who'd suggested that this was the moment radio would end, the column wisely concluded: "For sound radio, no flowers yet. Addressing itself, through the ear only, to the imagination, it will reach the inward eye".