The art of news-reading 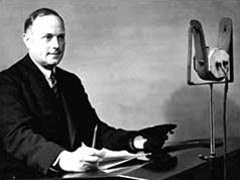 It's Arthur's fault. Once upon a time, it was decreed that news should be conveyed by delivering a few minutes of successive scripts.  Arthur Burrows at 2LO started it all off in 1922; it’s said he read the bulletin twice, once slowly and once normally, inviting listeners to suggest which they preferred. No text vote though.

The speed, length, style and content has changed hugely since those Reithian days of Received Pronunciation.  But, in essence, the gig remains the same.  A newsreader has to engage whilst doing what radio is not particularly geared to do: delivering lots of detail in quick succession.  If we started radio now, maybe the news bulletin would not exist in this form.

Thankfully, though, what radio is great at, is story-telling.  What a gifted radio newsreader accordingly is, is a story-teller of the highest calibre.  I say ‘newsreader’ rather than journalist deliberately.  Part of the dilemma lies in the word.   A great journalist may not be a great newsreader; and vice versa.  Recruiting someone who is capable of both is tough; recruiting someone who is excellent is tougher still.  Some want to be journalists and are not really bothered whether that is on radio or not. The listener is.

Firstly, it requires a voice. Just as some people have more attractive faces than others, some voices are more attract than others. Yes, you can work on a voice, just as you can slap make-up on a face; but as your mum would have said, you really cannot make “a silk purse out of a sow’s ear”. Some voices really just should not be on the radio.  Sorry if that sounds harsh.

Other voices are fine.  It’s just how they are used.  When Becky Adlington sought an Olympic Gold medal for her mantlepiece, she was up at dawn, practising and being coached.  In radio, spotty music presenters grow up listening to their idols, emulating them, then practising at hospital stations, playing their shows back again and again in a bid to improve.  But in British radio, how much time do aspiring newsreaders put into developing their art?  Some do, and they will likely agree with me that others do not. 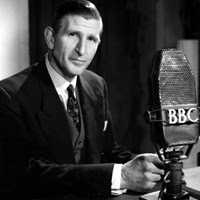 News has rightly changed over the years.  Witness the high pitched, staccato Pathe delivery, contrasting with the calm, yet dramatic Alvar Lidell, with a voice built for War.  In later life, Alvar wrote a letter to 'The Listener' magazine, decrying what he termed 'newsweeding'.  With rhotacism now seemingly ever more prevalent, he's weally got a point.

The Americans had fun too.  Enjoy this US delivery in the 1960s of a 'bannerline news' bulletin from the pirate station, Radio England, influenced by WFUN in Miami.  It’s utterly over the top, but he sort of gets away with it.  Americans love to perform, whereas over here, we call it 'showing off'.  It's the way we are brought up.


Frankly, just a dash more ‘performance’ might help many newsreaders today.  You are performing on stage to an audience; not reading a shopping list.  Don’t be shy. Wave your arms about, like when you explain something to a friend.  Who gives directions without raising one arm?

That bulletin illustrates a point too.  Whilst that guy gets away with it, it’s easy to point to stations which appear to think that punctuating the news with high-intensity production, and having the newsreader shout his stories over a dance track, lends power to the bulletin.  In the absence of a presenter who can really ride that imaging like a stallion, it’ll just make that presenter sound more wishy-washy than ever.

Radio 4 does things beautifully.  Only newsreaders of that calibre can hold an audience through a scripted half hour in the 6.00 p.m. news, retaining huge audiences.  But I wonder how many newsreaders learning their craft on smaller stations have troubled to play back a bulletin like that to consider ‘how do they do it?'.  One may not wish to sound like Radio 4 on a different format, but the techniques used by the likes of the impeccable Corrie Corfield are utterly relevant.  Enjoy here just a snippet from Peter Donaldson, a master of his art.


On music stations, there is a contemporary conversational news style which has become prevalent.  Let us not under-estimate the gift that this demands.  Sounding like you're telling your best friend what's been happening, whilst still retaining authority is a tough act to pull off.  Clearly, I'm proud of many of our journalists at Free Radio in the West Midlands, but just catch here how Dan Dawson has captured a style and called it his own.

A news story is a story.  Accordingly, it boasts a beginning, middle and end.  Each story, though is different, as should likely be its delivery.  I am amused to hear stories pushed through an enunciation machine WHICH makes every one sound THE same; and ends up emphasising all the wrong WORDS. They also emphasise the last word of every SENTENCE. Whether it’s the most appropriate one or NOT.  Having praised Radio 4, I do sometimes despair of some of their reporters who do that in their VOICERS.  Someone should tell THEM.  It’s not just stressing the last word – it’s lingering on the last WOOOOOOORDDDD.

And there's that inexplicable sound of 'surprise' which some readers use at the start of every story.  It is one useful device; but not for every story, please.

Great newsreaders use verbal punctuation marks.  Those great techniques like almost tossing aside some lines of detail, using speed and volume, signalling: ‘this is background, the story comes in a second”.  There is the drama too: if a news story is actually just coming in, making it sound as though it is.  The sound of discovery – the real sound of a hot news story.


Every broadcaster knows that a smile is audible.  It is not for nothing that call centre staff are told to smile when answering the phone.  There are stories when that is useful; and functional material like weather benefits too, when a trace of vocal brightness eases the legacy of darkness most bulletins have to convey.

Remember the value of the pause.

The voice is an instrument.  An instrument needs practice.  One person who gives good lessons is Kate Lee. She's coached the newbies; and  those "too old to be told".  Talking to Kate about your own voice and how you use it is time well spent. Kate often advises on 'warming up' the voice; and I cannot be the only person who uses her 'humming' technique before any performance, many years after she first mentioned it in her firm but fair motherly way.  It certainly helps those presenters who have the 'just woken up voice' at dawn: deep, but poor range and distinction.  I grabbed Kate, mid-way through a  busy day, as she wandered through my office; and asked a few questions over coffee:

Of course, it’s not a case of putting on a silly voice.  It’s about making the best use of the voice you have to lend the greatest quality to the words which should have been well-crafted. It's about  communication.

I recall once being in a shop with Radio 1 burbling away in the background.  As the bulletin began, the folk in the shop stiffened and quietened as he began. He had not asked to be heard, his authority  had demanded it.  Howard Hughes similarly ruled London on Capital for a generation.  Don’t read me the news; tell me the news. Talk to me.  Engage with me. You'd be shocked if you sat in a focus group and asked them how much of a bulletin they recall.

Preparation is key.  I appreciate busy journalists in small newsrooms barely have time to record all their various bulletins, let alone set aside enough time to rehearse fully in a spangled costume; but if you never witness a journalist half-reading their stories out loud as they hammer on the keyboard, there’s likely something wrong.  I appreciate too that with bulletins likely now appearing on screens rather on paper, marking up a bulletin in Biro, for its emphases, flow and tone, may not be possible.  That makes it all the more important to understand in your head how you'll make a story sound.

There are also some things which are just wrong.  Aitch is not Haitch.  Who says 'En, Haitch, Ess'?

Am I being pedantic, though, when I say Lieutenant should be pronounced in the English way, not the American?  I appreciate if I dare to mention 'schedule', not 'skedule', you'll just think me odd.  Language and pronunciation changes, I appreciate.  Ah well; sigh of resignation.  But don't you agree that 'Hospital' really must have a swallowed 'T', otherwise you sound like a seven year old?

You can deliver the best possible news story in a dreary way and be ignored and forgotten.  You may as well have stayed in bed.