Why do we love John Humphrys? 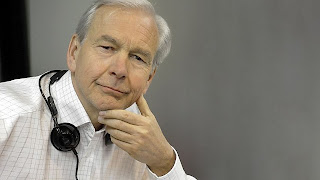 John is the lead singer in that boyband of populist, seemingly 'say what you think' public figures. In this colourful Venn diagram of rich characters, he overlaps with Ken Clarke, Clarkson, Boris and Paxman; and little with the politically correct remainder of the UK.  So out of  fashion, he's in fashion.  So old, he's trendy.

Schooled in the University of life, his career began in press, then commercial TV in Wales. He joined the BBC in Liverpool in the mid 60s, moving on to a spell as foreign correspondent.

Back home in the early 80s, John was soon a familiar face on the BBC TV Nine O' Clock News.
In 1987, on went those cute little black BBC headphones.  When John Timpson's seat round the Today desk fell vacant, John was summoned in a midnight phone call. He went on to sit alongside the crusty and excellent Brian Redhead, whose overcoat he was later to slide on as the years flew by.


John is not impressed after playing an obligatory trail

Rather like those mentioned in the opening paragraph, his humour, stature and immense popularity allow him to ride the crest of any criticism.  A little like Prescott, with whom he loved to spar, he could probably actually thump an interviewee and get away with it.  He's made his own headlines on the 'dumbing down' of TV and on politicians in general.
On the Today programme team, after over a quarter of a century, he is, certainly to the listeners, primus inter pares.  Like LBC's brilliant Ferrari, he masters each subject and ices the overall package with a dash of well-judged humour and a squirt of amusing intolerance.  His 'believability', rooted in his Welsh deprivation, and his humour set him apart.

A surprised John takes a famous call from Thatcher

But, like Robin Day, he is best known as the inquisitor most feared. If you have something to hide and you've an 0810 with John Humphrys, you may as well get out the bottle of Quink and write your resignation letter.  Some suggest he generates rather more heat than light, and contest he fails to allow an interviewee even to complete a relevant sentence, but it certainly makes for compulsive listening. In 1995, Jonathan Aitken famously accused him of "poisoning the well of democratic debate".
John volleys until he wins.  Sometime he does not even give his opponent a racket. One of his most famous recent performances was his November 2012 interview with the embattled BBC DG, George Entwistle. It was clear who was to win. Not least because the BBC has made an artform of self-flagellation; but in this case the interview would have been severely criticised had the tone been anything other than it was.
One gets the impression that he's happy to shake hands after a duel; and later coverage suggests he and George did just that, although one imagines few politicians are quite as stoic as George. 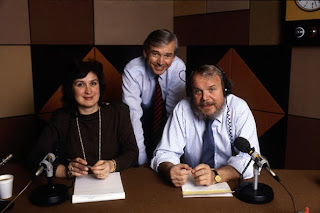 Like many great radio acts, it's easy to imagine they have always sounded as they now do.  Hearing his voice on the Thatcher call above though, and listening to his programmes this week, one hears the voice has become a touch more rasping over the years; and he has perfected his harrumph. His tones now burr beautifully from every Hacker in the Home Counties.
I do not know what John is like to manage; but may I guess?  Given his on-air demeanour appears so natural, I imagine he is unlikely to turn off his argument-winning skills at 9.00 a.m: so I suspect he won't be too happy if his car is late; or a youngster makes a basic error in a cue.  Just sometimes, I imagine he prompts his 'managers' to shake their heads tolerantly, yet in disbelief.  I suspect he never listens back to himself; is supremely confident to colleagues; and yet, away from base and after a programme is put to bed, he might, alone, critically consider his own performance in his own head.  And, away from the pressures of the coalface, I suspect he's a warm heart.  Then again, I'm just guessing.

He is careful never to portray himself as perfect, ensuring that others may not swoop in to point out his own human failings.  He writes freely of his failed farming escapade; and is not afraid to have a joke at his own expense.
John is no stranger to awards. He won the Sony Gold Medal for Lifetime Achievement, on which the citation read: "He has truly changed the face of radio and the nature of the radio interview for an entire generation".  But, he is no means just an elder statesman; his work shines through still on its own merit, as demonstrated yet again at the 2013 Sony awards when he was declared 'radio journalist of the year'.
Happy 70th birthday, John Humphrys (written in 2013).  Why do we love him?  In an ever more sanitised world, where every view has to be measured, and each statement qualified, he appears to be the honest voice of the people.  Each morning, this grumpy uncle slaps all the people who appear to have ruined our lives, educated our children poorly, devalued our houses and stolen the family silver.