I always fear that Christmas day on the radio will once again be stuffed with dull pre-records and friendless second-tier presenters saying they are 'sitting in' for someone better; and sounding as though they really would prefer to be somewhere else.

It's been truly lovely this year, though.  Mind you, radio should get Christmas right. 108 years ago, on Christmas Eve 1906, the first ever radio programme transmission happened to coincide with the festive season.  Good old Reginald Fessenden planned 'Oh Holy Night' on the violin, together with some passages from the Bible, to be beamed a mile through the newly discovered airwaves.  BBC Local Radio management will be delighted to learn his wife, Helen, was indeed down to co-host; although she became so frit as the red light went on, she backed out.   Reg had to grab the good Book off her.

UK radio plc has delivered a great Christmas 2014. Radio 2 let Paul O'Grady off the lead, sounding just right on this most special day. Warm and companionable. Some performers don't make the transition well from TV to radio, but Paul, maybe given his groundings face to face in some of the UK's more eccentric clubs,  is a born communicator.  Not to schedule Paul on Radio 2 on Christmas Day would have made me question the sanity of the Controller.

To hear Radio 1 play Eartha Kitt on Christmas Day was a delight.  I love the fact that, for one day, the station was sufficiently confident in its skin to say 'fuck the format, it's Christmas'.  Imaging on the station featured the great Guy Harris (@santamessages) as Father Christmas, sounding just a tad younger and a little less ho-ho than he does on (my own) Free Radio, where his irreverent branding sounds a million dollars this year.  On Free today, I enjoyed that same Santa, for there is only one, interviewing Noddy Holder.  Noddy was quizzed on , amongst other things, his bank manager's annual Christmas delight.  The question could easily have been reversed, given how Guy is rightfully carving out a brilliant reputation as the voice of Christmas.

Capital was largely true to format, yet sounded upbeat and clearly in party mood, with Bassman enjoying himself and reaching out to those who've had to slip on their DYMO badge and work uniform for the day.  Classic FM sounded typically warm and welcoming with the truly lovely Anne-Marie Minhall wearing a silly hat and playing Christmas requests.

Heart boasted Olly Murs in fine form.  Like TV stars, some music personalities sound great when listed on the schedule, but they just cannot manage the radio thing really.  Olly can - and there is the sniff of real potential there, should he ever get sick of the singing malarky.  His show today was well-produced, authentic, with promising storytelling, and utterly feelgood.  Again, Heart, which is leaning just a tad more credible nowadays as it clears demographic room for its Smooth sister, cast caution to the wind and bunged on Robbie & Nicole's 'Somethin' Stupid'.  Olly observed he hadn't heard it for ages. I suspect it might be ages before they play it again too.

Clyde 1's Kate and Stu faced the tough task of waking  up Glasgow on a Christmas Day too many families will rather forget as they reel from last week's tragic accident.  Warm and involving, with callers and just the right range of Christmas songs,  this was the sort of radio the City needed, and which many commercial stations got spot on this year.

Kenny Everett was a Christmas present to the Nation in 1944, so it was eminently fitting on what would have been his 70th birthday that many stations paused to mark his contribution to our medium.  The Kremmen episodes were dubbed from Racal Zonal and aired; and Paul Rowley's documentary on BBC 4 Extra imagined what mischief this pensioner would be up to now were he still on the schedule.

BBC Local Radio has a real place in the heart at times like this. Those stations attract vast numbers of 55 pluses, steeped in radio.  Those individuals  are not ancient, but they do seek conversational, engaging radio and not a youngster saying the bleeding obvious and shouting 'tweet me, tweet me'. Many stations got it right, with carol services, a nod to faith and a friend in the room.  My other half, Paul Robey, is entertaining with aplomb through Christmas afternoon on BBC Radio Nottingham, and the wealth of contributions shows the appetite  for warm communicators on those stations. 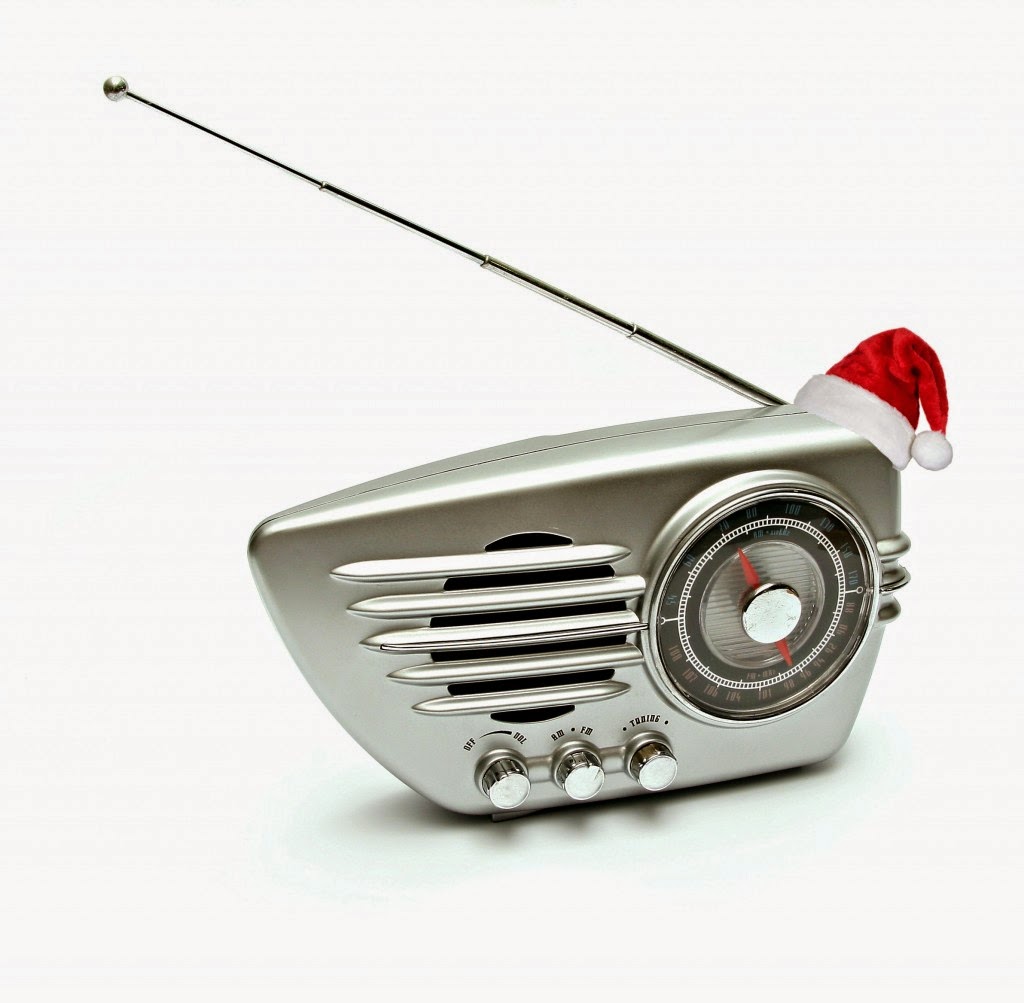 Year. If I wanted a non stop party, I'd stick my iTunes on. Some listeners will indeed be sat alone, and many of a certain age will  look to radio for a companionship no other media can provide.

So, a great Christmas Day 2014 on radio. Good scheduling and some great presentation on what should be the best ever day to be on the air.  Presenters at their most relaxed, audiences in a good mood, and a recognition that, on this one single day, there is no such thing as a target audience.  Just about everyone is wearing a silly jumper and hat, talking rubbish and singing the same songs:  prince or pauper,  north and south, old and young.

In closing, may I just express the wish that stations adopt the 'twenty-fifteen' pronunciation for next year. We've had five years to get this right.   In marking the 100th anniversary of WW1, no-one refers to 'One thousand nine hundred and fourteen'.  Can we agree 'twenny-fifteen'  as a rule for next year?

Unless you are Olly Murs, in which case 'Two farzand n'four'een", replete with glottal stop, sounded strangely attractive.

(And well done to you wherever you are, on air, in the newsroom or 'behind the glass' today. Thank you)
at December 25, 2014