An Open BBC For the Internet Age 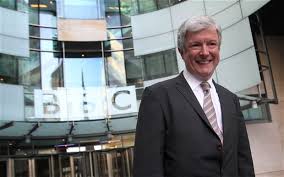 Reith did not invent the phrase ‘inform, educate, entertain’, I learnt from today's BBC's Charter review proposal document.  I really like facts like that.

No, it was clever old David Sarnoff, the founder of commercial radio in the US. He wrote that its function was “entertaining, informing and educating the nation”. The report then goes on to point out mischievously that “Reith can take credit only for re-ordering the three and, characteristically, turning them into imperatives”. I want to have a drink with the person who wrote that impish sentence on page 77 of this 99 page document.

Like Reith, I shall not trouble myself too much with matters television.  On radio, the report is distinctly obsessed with 'distinctiveness'. It understandably labours the point that "all BBC radio services are distinctive and some are unique".  “To break hits, they have to remain popular stations— otherwise fewer people would be exposed to those new songs.” It seeks to define distinctiveness with some success. I like to dress distinctively, but I still wear a pair of jeans and a casual shirt most of the time.

A little like the debate about immigration statistics, one can argue about the music differentiation figures cited in the report, as it compares Capital's 398 tracks in a month with Radio 1’s 3868. Commercial radio clock hours have about 22% fewer content minutes than the BBC's; and the Radio 1 figures include the impressive off-peak specialist shows.  But we know the point.  Both stations are right to be doing what they do.

The overlap comparisons also pit Radio 2 against Absolute.  Putting to one side the irony of using a diagrammatic approach which mirrors Absolute Radio’s canny comparemyradio.com  site, the figures suggest Absolute spins 1598 tracks, compared with Radio 2’s 4423. Different every time you listen.

The Government’s Green paper question about the level of overlap between Radio 1 and 2 is addressed.  The loopy civil servant who suggested that was presumably still under the impression that Radio 1 and 2 still simulcast the David Hamilton afternoon show.  Radio 1 shares just 6% of music tracks with Radio 2; and Radio 2 shares 5% of tracks with Radio 1, is the report’s understandably huffy retort. Just 13% of the combined Radio 1 and Radio 2 audience listen to both stations.

I’d be a little annoyed if I were David Holdsworth (and I’d love to be him, actually), as the report announces that local radio audiences are declining, in a way they do not malign 5 Live’s current audience levels.

58% of BBC Local listeners are aged over 55, boasts the report. If I’d have written the report, I would have pulled off the 50+ figure, given that’s what its licence demands it serves: it would have made a more favourable graph. (Interesting though, that poor old Ben Cooper is scowled at in the BH lift by the man from the Trust for Radio 1’s poor showing amongst surly 15-24 year olds (40%), yet BBC local radio (UK) has just a 21% reach amongst 55+. And Radio 1 attracts 15% of 45-54s compared to BBC Local's princely 16%).

The report recognizes that your once proud local rag may now be a weekly free-sheet in which press releases are conscientiously pasted:  “on current trends the BBC could become the only traditional news provider in some areas—so to avoid that, we propose to open up our spending to support local newspapers and others.  …. the BBC would allocate licence fee funding to invest in a service that reports on councils, courts and public services in towns and cities across the UK. The aim is to put in place a network of 100 public service reporters across the country. Reporting would be available to the BBC but also, critically, to all reputable news organisations.” That’s a brave suggestion; and will not appeal to those journalists who get their legal highs from being first with a story, but it’s tasty food for thought.

On the other hand, “local newspapers would be invited to provide BBC local services”. That must generate the suspicion that BBC local radio in the future could be run very differently from how it is now – and I have long been an advocate of giving the over-generous BBC local radio budget to a talented team and let them get on with creating a great truly local listener-focused radio station with a clear remit, away from the BBC burden.

There is praise too for ‘BBC Introducing’ on BBC Local Radio. Rightly so too.  It’s a great effort across the country, and I suspect that Dean Jackson on BBC Radio Nottingham (who deserves far more recognition than he ever gets) is responsible for a fair number of the 30 acts discovered this year.  I confess I often wonder whether this show is an uneasy tenant in its current home, rented from the 50+ targeted BBC Local Radio. But there is no doubt this project should have a conspicuous, fitting and maybe enhanced place in the BBC fold.

What of 5 live? Well, it covers 51 sports.  Do 51 sports even exist? I’m tempted to invent another and then complain to the Trust about under-representation. “5live’s sports output has never been broader” trumpets the report, forgetting the fact that its audiences are not really at a height.  Maybe there’s a connection.

As someone who has little interest in any of the 51, I do not have the passion for 5 Live I once had. Sport and news are probably only linked in media-land because they both comprise the spoken word.  They are uneasy bedfellows. It is a puzzle to me that the BBC does not have a proper rolling news service.  If this country goes to war at 7.00 one night, Radio 4 And 5 Live listeners will continue pruning their roses blissfully unaware, distracted by Alan Green’s enthusiastic commentary or Brian Aldridge whinging. Frankly, I’d create a new AM and DAB radio channel, simply simulcasting the audio of the BBC TV news channel. If the BBC is thinking more radically about repurposing content for various platforms to exploit its differing usages, as it argues in this report, then they can borrow that idea if they wish.

There is mention, in a broader context, of “a transition from rolling news to streaming news”; and one wonders just how long it will be before some real-time linear channels become on-demand programme strands.  Whilst there’s a ready appetite for Radio 4’s news programmes, I have to confess my injection of 'You and Yours' and 'More or Less' are always from the iPlayer. Winifred Robinson is a dish best served cold. Could that be another way, in due course, to reclaim a network for a rolling news radio channel, and conclude Radio 4’s dilemma of likely audience size versus place on the daily schedule for particularly distinctive content.

Maybe I’m wrong. Maybe it is ‘rolling content’ which will disappear first.  Maybe we just want links on social media to  content about ‘stuff happening now’ which we can select at will.  There’s a hint of that in the report.

The growth for BBC radio digital growth looks impressive, but it’s maybe churlish of me to argue that there were only around half a million DAB receivers in the UK when the graph's x-axis began in 2003.

The BBC has a hundred years of radio content sitting around on shellac discs, C90s and USB sticks that my dad and I have paid for (He was born six years before the Corporation began). We want to hear it.  As a bit of a radio historian, I am frustrated that so little exists online, although the Genome and similar efforts are laudable. There’s a halfhearted ‘not now updated’ archive site too.  I’m glad that the BBC seems poised to open up its content to its shareholders, whether anoraks like me, or more simple folk who want to interrogate a more useful genuine subject.

“Bringing together what the BBC does across arts, culture, science, history and ideas and add to it work done by many of this country’s most respected arts, culture and intellectual institutions. It would also make the most of the BBC’s rich archive heritage— from speech radio to our television collections—and open it up for others. For curious audiences around the world, the BBC would create and manage an online platform that, working with partners, would provide the gold standard in accuracy, breadth, depth, debate and revelation. It would offer audiences the thrill of discovery and the reassurance of reliability.”   Good stuff, Tone. 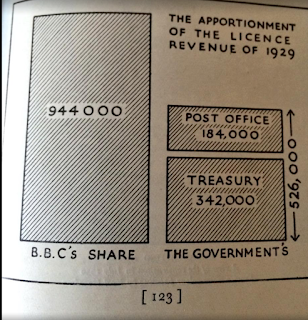 There’s justifiable praise for the BBC World Service as “the UK’s most important cultural export’.  Those who moan about us ‘having to fund radio in other bloody countries’ conveniently forget that this thing probably pays for itself over and over again in the long term, in human as well as commercial terms for brand UK. It's fitting too that the BBC funds it.  After all, back in 1929, the Treasury and the Post Office  kept 36% of the Licence Fee.

This solid, thick pipe of income is a huge privilege, and we need to know it is spent wisely.

This report is an impressive piece of work and a good starting point. There’s some blunt pride from an organization which is often too quick to apologise when it should stand its ground; there is some fresh thinking and ambition; and there is a recognition that the BBC future will be different from the past. Let’s, please, just make sure we hang on to the right bits.