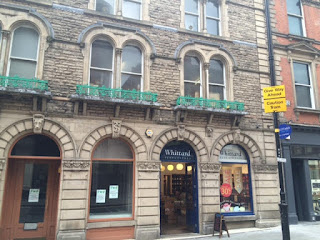 Bridlesmith Gate lies at the heart of Nottingham's fashionable quarter.

Number 4 Bridlesmith Gate stands towards the St. Peters' Gate end of this now pedestrianised street, squeezed between a tea shop and the Body Shop.  The attractive stone 1876 premises were once a pub, with the original landlord's initials carved into the stone; the Dog & Bear was later to attract a rowdy reputation.

Its studio stretched out about 18' x 35', equipped with a large, lonely microphone. A second microphone was reserved for outside broadcasts; and a gramophone was on-hand for the playing of records.

The B.B.C.'s hasty initial strategy comprised the assembly of a network of local stations, with Nottingham being added to the map as the sixteenth outfit on a damp Tuesday September 16th, 1924. The 5NG signal was transmitted from an aerial dangling from a chimney on Noel Street.

The launch was an ambitious affair, heralded by a live outside broadcast from the Albert Hall with the RAF band providing an opening segue.  Accordingly, for the record, Wagner's 'Flying Dutchman' Overture was the first tune to be played on radio in Nottingham.  Such was local enthusiasm, attendance exceeded the 1600 capacity and some unfortunate souls were left out in the rain enjoying a relay from loudspeakers at the Arboretum, kindly sponsored by Pearsons of Long Row.

As the applause subsided, the B.B.C.'s inexperienced MD, John Reith, uttered a few encouraging words; followed by the Mayor and the Sheriff doing much the same thing.  After another burst of music, the switches were flicked and the citizens of Sneinton, Sherwood and Southwell witnessed their first late news from London crackling down the line. Those network bulletins were a relatively new affair: until the year before, content had been dictated by telephone from the London station to its patient little sisters across the country.

The station had been established as the fifth in a series of low-power relays around the UK, with 5NG supporting the larger 2ZY in Manchester from which it was fed via a telephone circuit.  The relays operated at 200 W,  compared to 1.5 kW for the main stations, together claiming to reach 75% coverage of the UK population; more than the first tranche of commercial radio (ILR) in the 70s; and about the same as the proposed second national DAB multiplex from Sound Digital. 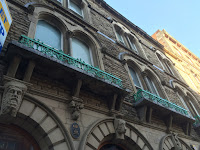 5NG transmitted variously on wavelengths of 322m, 326m or 275.2m medium wave, as the Post Office mandarins pulled out their hair trying to make sense of the growing enthusiasm for broadcast spectrum here and overseas.

There was a proportion of evening local programming too, amounting to 2,782 hours in the first year. The jaunty 'Children's Corner', was a popular element, affording a stage for a host of local 'aunties' and 'uncles'. Auntie Ruby was in charge, who, by day, was Ruby Barlow, a solicitor's wife with theatrical leanings. Laurie Bagshaw was also much-loved by the 5NG team and  listeners alike.  Known for having 'racy friends', few knew how he actually earned a living, but he appeared to have sufficient free time to help manage the whole affair.

"The cumulative effect of this work has been to identify very closely the Nottingham Station with the life of the people. Nowhere has this been more apparent than with the work carried on in the Children's Hour. Nottingham has been singularly fortunate in those whose lot it has been to bring joy and happiness into so many homes. Day after day, year in, year out, the younger generation have been able to listen to songs, tales and jokes, a form of entertainment to which many of them had been strangers hitherto."  (BBC Yearbook 1928)

Lest older brethren felt excluded, the schedule also dutifully featured 'corners' for others, including "Scouts' Corner" and "Teens' Corner". 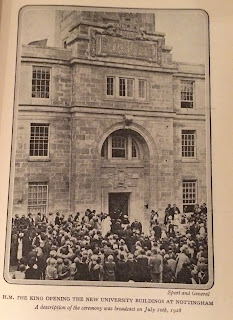 Local press engaged fully, with no hint of paranoia about the fledgling medium. In a regular '5NG attractions' column, one sub-heading read 'Some Good Programmes Next Week', beneath which the Nottingham Evening Post trumpeted a special local concert on-air featuring 'entertainer Stainless Steven'.
Outside broadcasts included the first ever radio coverage of the opening of Goose Fair on 1st October 1925; and the King opening the new University buildings on July 10th 1928, after which the City's Mayor became a Lord Mayor for the first time. Much excitement ensued when annual gatherings of 5NG's 'Radio Circle' were beamed from the old Exchange Hall.

A Mapperley lad made his debut on 5NG at the age of 12: Cyril Stapleton, who became a well-known violinist and bandleader, eventually playing with Henry Hall, the LSO and even on some Frank Sinatra tracks. As a schoolboy on 5NG, he broadcast in scholars' concerts "Master Cyril Stapleton (solo violin)".

Home made crystal sets were painstakingly assembled with long makeshift aerials to receive the signals from near and afar. The Nottingham Evening Post kept listeners abreast; and a radio column called "Wireless Whispers" was duly introduced. 5NG reception reports came in not just from Nottingham but also Loughborough, Lincoln, Leicester and Derby. Listeners were even tempted to invest in an expensive valve set, costing as much as 7 pounds.
The B.B.C. 1928 yearbook  proudly reports:

"It is three years since the Nottingham Relay Station was first opened, and from that date began a revolution in the artistic life of the city. So much a part of the life of the community has Broadcasting 'now become that it is difficult to imagine its absence.  In these three years more than 40,000 licences have been taken out in the Nottingham area, which has as many and perhaps more listeners per thousand of the population than any other centre of the B.B.C. activities. How has this been achieved?"

"Nottingham is not renowned as a musical town, and yet musical artists of all kinds have offered their services for Broadcasting. The encouragement given to promising artists has been no small factor in building up the popularity of the Station. In addition to routine concert work, a number of popular community singing concerts have also been given from which local charities have benefited. Outside Broadcasts of events of civic importance have been a regular feature of the programmes."

"Broadcasting has come to stay. The B.B.C. has set up a standard in Nottingham which must never be lowered in any way. Radio is quite as much a part of the daily life of the people as the newspapers, a position which must be kept and consolidated".

Life was not to be so simple. As technology advanced, 5XX on Long Wave, eventually from Daventry, took over; and 5GB supplied a Medium Wave service to the Midlands. National and regional radio had begun. 5NG was no longer needed.  The function of a relay station had become defunct; and its serendipitous emergence as a commmunity service was disregarded.

In the words of the understandably grumpy new Lord Mayor (Alderman Huntsman): "With all due respect to the authorities in this matter, I think they have overlooked the regional importance of a great centre like Nottingham. The connection between Nottingham and Birmingham is very weak.There is little association or mutual interest between the two great cities". (Nottingham Evening Post)

The pleas went unheeded. It was decreed that networked programmes should replace local ones.  Nottingham listeners were placated by assurances that their local talent would enjoy a bigger audience from  the regional transmitters; and that programme quality would be higher.

Uncle Laurie and Auntie Ruby promptly defected to Birmingham; and 5NG turned off its valves on 31st October 1928 – after just four years. It was to be four decades before local broadcasting returned to Nottingham.

More radio nostalgia - and a very personal take - in my book Radio Moments - Fifty years of radio, life on the inside