Big is beautiful. Unless you’re a BBC local radio station.

The larger the area, the lower the reach %. It’s not the fault of the folk who work at the larger stations – they likely work just as hard - and are also in more competitive cities with radio aplenty – and, in London, with head on commercial competition for the talk ears. 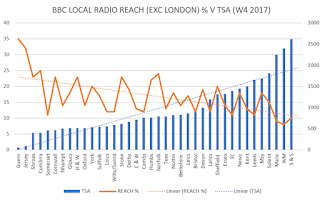 Are there other reasons? Is there something about larger communities which means they feel increasingly less ‘local’?

BBC local radio in London, the West Midlands and Manchester has always faced a tough challenge; and the BBC has tried a number of approaches in those areas, with both format solutions (GMR/GLR) and opt-out services, for example, 'Heartlands' in East Birmingham from BBC WM.

Elsewhere, there has been a mix of approaches over the years. The BBC has amalgamated some services, only to choose to split them off again later. Others have remained amalgamated after previous rounds of budget cuts - and others retain some degree of sub-localisation. 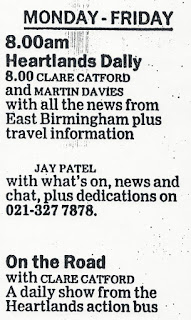 It’s interesting looking at the context of other media. Around the country as daily press titles in significant cities fall, some pretty decent online hyper-local titles rise, seemingly well supported by local readers and businesses. With no printing overheads, they can serve small communities where a local press title would be unsustainable.

Whilst youngsters adore their city living, families may choose to start their families in the suburbs. This is ‘where they live’, not the big city down the road. Their high street is the one where they push the pram in then morning and meet their friends later.  Town centres which once pulled down the shutters at five o' clock now have bijoux restaurants with blackboards outside and thriving pubs which stay open late – at which time the revellers can stagger home.  At a time when arguably cities are becoming more homogeneous, is there a new sense of pride in smaller communities? 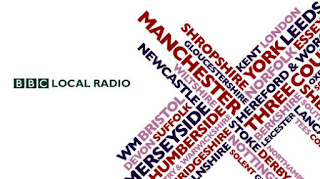 It’s apparent that smaller areas can love their radio stations. The station is a real symbol of pride.

Despite the excellent performances of top notch commercial and BBC stations in my home patch of Nottinghamshire, Mansfield FM, the commercial station serving a town some 15 miles from Nottingham’s centre, punches a great 28% reach.

BBC local radio’s 40 stations use 93 FM transmitters. Whilst there is some split frequency use, there is the potential for more. Putting to one side any relevant OFCOM operating framework considerations, could there be merit in the BBC implementing further localisation, at a time when commercial radio is taking steps in exactly the opposite direction for quite understandable reasons? Yes, it's been done before in some areas, but times change. And how well was it done?

Could BBC local stations originate significant additional hyper-local programming for proud distinct areas, where they naturally exist, opting in and out of the mother ship for parts of the day or week?

As my old colleague Keri Jones illustrated to me, this happens overseas. The tiny ABC South West Western Australia generates a breakfast show for the small, remote town of Bunbury. When they are not doing their own thing, they relay ABC South Coast in Albany which offers programming for a slightly larger, but still rural, part of W Australia. When ABC South Coast isn’t creating local shows, they relay ABC Radio Perth from the state capital of Western Australia. ABC Radio Perth provides local content until 10pm, then it’s national local radio programming overnight.

This is eminently deliverable from existing BBC local premises and infrastructure, and I believe existing resource. With DAB simulcasts too, the ‘home’ service could continue to be broadcast across the whole area, if desired. Or – the 128 kbps multiplex DAB capacity could even be split too – providing more than one service at once, albeit across the whole patch.

And, as BBC local radio listeners start to listen to more content 'on-demand', will there be further opportunities to create and disseminate hyper-local audio which is not even broadcast?

At a time when we can personalise all our media choices, should radio be offering something a little more tailored? Would radio which sets its stall out to 'do local' do better if it were more local?

Find the broadcaster who really knows and loves their subsidiary town and get them on-air to their neighbours.