What Can We Learn From the Bishop?

Watching the Royal wedding from the top deck of a cruise ship surrounded by enthusiastic Americans was a sight I shall not easily forget. Those sunny pictures of a chocolate-box Britain will likely do next year’s tourism receipts no harm.

And for us broadcasters, maybe there was a lesson at this Windsor gig from Bishop Michael Curry - regardless of our thoughts on the wedding, or on faith.

Here was a 65 year old preacher from Chicago - playing with the very vocabulary we have at our disposal each day, providing a memorable performance which is still being talked about weeks afterwards.  That’s a goal for us all.

He surprised. We’d had the wedding functionals, just like we have weather and travel in radio-land, and they’d played a few familiar songs.  But he made us look up. It wasn't quite what we expected.

The whole thing had been well-teased. We knew he was an American preacher - so it promised to be a tad different from Camilla's nuptials. But we didn't know quite what lay in store. We knew enough but not too much. And we wondered.  Curiosity is a hugely powerful thing.

He used the word 'you'. This was not some abstract lesson - it was about each one of us. "If you don't believe me, think about a time when you first fell in love. The whole world seemed to centre around you and your beloved." We nodded. "Let me tell you something".

He asked questions. "Anybody get here in a car today? An automobile? Nod your heads if you did…”

He’d prepared. Probably  a little better than some major presenters do for key links. He knew his theme well and he’d thought it through. He didn't wait for the last organ note and then wander into the pulpit hoping for inspiration.  He brought notes on the ecclesiastical iPad - but didn't always rely on them. He felt the mood.

His delivery was beautifully-paced – from a  sombre stroll to a real gallop - and pauses for effect. Wonderful Radio 4 newsreader Peter Donaldson used to say pause "until it hurts".  Too many of us don't pause and give the listener time to think - and to respond.

There was humour.  Light and shade. Reverentially irreverent. "Two young people fell in love - and and we all showed up".  Like most radio, it wasn't laugh-out-loud, but a sprinkling of wry smiles. In many radio formats, amidst the most serious of topics, there are smiles to be had - and in today's world, we need them more then ever.

He was himself. Yes he was in an unfamiliar place – and he adapted what he said for the audience, yet this was still him. He was authentic. There was passion - and we believed it. His boss had not written his words for him - although He had certainly influenced. 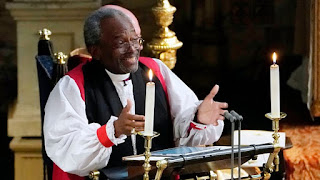 He played his voice like an instrument. Sometimes warm, sometimes verging on threatening. Sometimes a whisper close-up - and sometimes a bellow from afar.  On occasions, he smiled as he spoke. He caressed every word. When he said 'love' – it sounded like love – and 'fire' sounded positively inflammatory. 'Power' was powerful.

He was likeable. We don’t know him personally, but in the course of this short speech, we warmed to him.

He is experienced. The Bishop was ordained in 1978.  I suspect he is better at holding his audience now than he was back then. Simon Mayo is better now than when he was a callow youth on Radio Nottingham. Do we cast aside our best broadcasters too freely?

He knew his audience. This was Harry and Meghan’s gig – and the couple's contemporaries connected more with a mention of Instagram than the Daily Star.  He spoke our language; he knew we said car not automobile.

What would his PD have said? Maybe a bit long? Could he have shaved a couple of minutes off and achieved just as much if not more? Probably. Which just proves than even the very best of us can be even better.