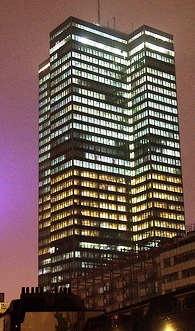 I smiled when I made the mistake of reading one of those anorak groups recently. One contributor suggested that ILR's 'downfall' began when Capital moved out of the "iconic Euston Tower" into premises "above a restaurant" in Leicester Square.  It was Kenny's magic which turned that Euston office block into the 'Tower of Power'; and I suspect the author of that post would be none too pleased were his rates to change from those of Euston Road to those of Leicester Square.

Some radio stations have an aura. You walk in you can ‘breathe in’ the spirit of the place.   Often it’s not the building itself, it’s the history and the characters who’ve spent time there over the years. We all leave a bit of something along the way.   Often a funny tale to tell, passed from generation to generation by professional story-tellers, amplified each time.  They all seep into the brickwork.

Regardless of the impressive new facilities at New Broadcasting House, I know a few old Bush House folk shed a tear as they walked down the Strand for the last time.
At Free Radio, we moved our Wolverhampton studio facilities to a new purpose-built location elsewhere in its broadcast area.  All very practical, frankly.  The old building was far too large for the number of people now working there.  And it leaked.  Each room was equipped with a heavy large door: great in nuclear war when you need to prop one up against a table, as instructed by the Government  ‘how to cope in WWIII’  booklets, but not so good when you are wondering what the folk in the sales team are thinking about your latest bright idea.
The old 19th Century Tettenhall Road building became a radio station in the sunshine days of 1976, when Beacon Radio came on air, the last in the first tranche of ILR commercial radio stations.

It was a rambling old house, formerly an orphanage, housing many of those who'd lost their parents to Cholera. The screams of stroppy presenters went on to replace  those of stroppy children.  I gather the station was very nearly not based there: it was to be in Sandwell, but the management team rushed out and bought it on a whim with a cheque for £18,000.  And there it’s stayed.
It became offices after out tenure, although I mused that it would have made a great building for a nursing home for ex-disc jockeys as we all reach retirement.  The mind wanders. How much fun that would be.  We could all have a turn at the decks for the Friday night discos.  Our doorbells could play JAM accapella namechecks; happy nurses would wear satin jackets with logos on; and coffee would be served in red and blue 'Radio 1 247' mugs.

For thirty years, Trent occupied a converted house in Nottingham, well, two to be precise; and it had been a hospital too.  I think Dale Winton’s desk was plonked where matron used to sit.  If the walls of that place could speak, the tales they could tell.  I pass the battered old blue door most weeks and smile wistfully; and on quiet mornings, even touch the dimpled gold door-handle to touch my past.  This was a building which saw me grow from boy to man and I was forever intimidated by its reception area, where my acne and I sat so often before getting my first job there.  We all have a building like that in our hearts.

My quick history of the old Radio Trent building in Nottingham
Trent had ghosts.  I only mention that, as I recall that it is not the only radio station which lays claim to them.  Mind you, with the studios having been the morgue, it’s hardly surprising.  The Beacon building is said to haunted too, as, reportedly, was the old 1876 ecclesiastic Leicester Sound building.  I gather someone hanged themselves on the stairs there in its life before radio.  The station nearly drove me to that on occasions.

I recall from friends around the network that many other stations chose buildings with rich histories.  Red Rose Radio was based in a former church, where hardened journalists feared the late shift; and GWR Wiltshire suggests its newsroom boasted a ghost which switched its TV to adult channels overnight. Yeah, yeah.
Chris Evans writes in his book about hanging around at the Piccadilly Plaza in his Manchester youth, and awful though that original radio station building, built in 1959, eventually became, I’m sure in later years, he’d still stare at it and smile.
Capital’s building in Leeds is still very much alive with great living, breathing, radio; and there is another of those buildings which you ‘feel’ as you walk in.  Not so much for the Joseph's Well brickwork, or indeed location (talk to them about the day when Boy George turned up at the car park), but because you can feel the energy as you walk in.

And Golden Square, the beautifully decorated home of Absolute - and a fund of memories.  There is another of radio’s stately homes.  Why is that?  Because of the characters who’ve passed through it.  And, as ownership changes again, thoughts return to those who’ve shouted, cried and laughed between its four walls.  And, one imagines, feelings surface that Golden Square may not be forever the home of that legacy.

Most of the first 73-79 generation of stations have now waved farewell to the rent, leaks and spooks of the buildings in which they launched. Who's left? The Pulse (Pennine)?  Possibly a couple more, but the list is small.

As we wave farewell to Tettenhall Road as a broadcasting base after 37  years, it's a chance for a last farewell glance at one of commercial radio's original stately homes, and the people within,  before we put the key in the Chubb for the last time:

But really, it’s not about buildings.  It's about the teams and the people.  They energise the space, not the other way round.

The future?  Is radio an operation which always needs a single building? It's amazing what a presenter can do with a few egg-boxes, a Soundcraft mixer and a blanket draped round their head.