Am I allowed to write about radio station technical folk without risking being stabbed with a circuit tester before being hauled off in a large flight case, my mouth sealed with Gaffa tape?

Baggy cheap jeans from the Freeman’s catalogue; topped off with a sweaty over- tight, over-washed light-blue T shirt bearing a huge logo, riding up over an elastic snake-belt, to which a gadget is affixed.

The gifted Jon Holmes is oft-invited to give light relief at the annual Radio Academy TechCon conference, where he’s been known to refer to the dress-sense of our technical crews.  Most would concur that my wry vision here is outdated; and I actually envy some of the natty sartorial elegance displayed by technical brains.  Just maybe, now technology is easier to heave about, and technical blokes are allowed to be creative themselves, they are letting their feminine side show.

At one station I worked at, the engineers were dubbed the ‘Programme Prevention department’.  When we leapt forward with a bright programme idea, they would create a fringe performance, leaning back in their chair, relishing the power of the moment, arms folded, before reciting a catalogue of reasons why the idea was a non starter, with dramatic huffy intolerance.

It’s all changed now, mostly.  If it hasn’t in your station, it’s time to have a stiff word.  In my last few gigs certainly, including Chrysalis, Virgin, and here at Free Radio/Orion, I’ve worked with some hugely gifted enablers.

Dave Walters used to wander into my LBC office, sink into my black leather chair and ask 'how would it be if you could...’ before outlining some crazy idea he’d had in the shower that day. Thus the premium podcastingidea at LBC sprung to life, which became an appreciable revenue earner – and a great service to listeners.  If Press had access to those sorts of brains and insights a few years ago, they’d probably be in a better place.  And, full marks too to the great Lawrie Frayne at Orion.  After seeing radio through from its triple-stack* days, he still has the enthusiasm of a teenager and a tolerance I envy when presenters call him at 2.00 a.m. to correct something that is their fault.

Our Orion IT guy, Jonathan Dean ('JD'), hotfoot from the brilliant Golden Square machine where Science meets Art seemingly all day long, is a master of that great skill of translating techie speak into words people like me understand.  Just like Bruce Davidson (Chrysalis/Global, now BD Technology) too.   And John Moon from Trent, a youthful enthusiasm to this day, having engineered music sessions brilliantly for decades.  The list goes on – and I reckon there are now more great people now than ever in this sector. Thank goodness.

For those who’ve been doing it a few years the job has changed beyond recognition. No longer do you get that delicious Scalextric smell of soldering wafting from the engineering workshop. It’s gone from stylii** to wi-fi in a generation; and those who've adapted with it deserve a ripple of applause.

I like the fact that Global Radio has a ‘Creative Technology division’.  It’s a great, fitting name.  I also admire many of the folk who work within it, who have significant larger brains than I have. A bit of me wonders whether there’s a more prosaic ‘Non-Creative Technology’ division hidden away somewhere in Leicester Square with isolated folk hunched away doing any necessary duller work. 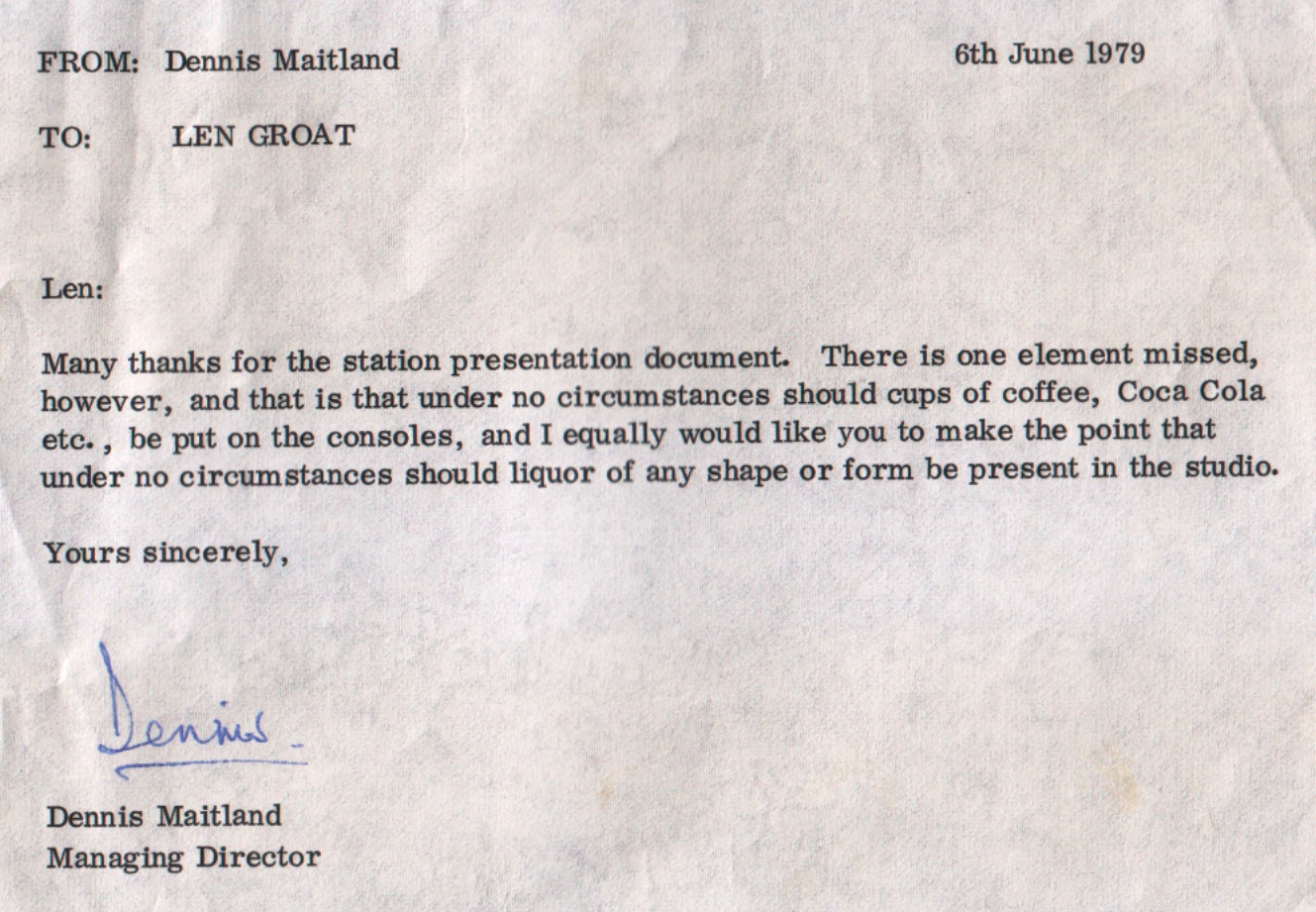 There is maybe just one thing which hasn’t changed in generations of radio: the notes saying don’t spill Coke in the mixer.  Maybe the other thing which remains unchanged is presenters suggesting they never received that note.  Or indeed any note asking them to do something they forgot to do.

The truth is that many technology folk are justifiably frustrated by the lack of planning ability of their programming colleagues and their lack of care in equipment usage. We drive them to distraction.

Similarly, from our end, it’s tough to explain the way a presenter feels when they ‘don’t sound right’. Naff mic processing or some dodgy cans affects the way you hear yourself.  It can depress a performer  which affects their next link, which depresses them further.  As every music jock knows, even new earpads on Beyers*** affect your show.  And, when something’s gone wrong, we really value you telling us what the likely prognosis is, and how to get round it – before you disappear from view to go off and fix it.

When technology is first developed, the technicians are also the folk making the content.  It was certainly true with the Marconi engineers in Essex in 1922. Witness the talents of the inimitable engineer-turned-presenter Captain Peter Pendleton Eckersley in my other blog.  Similarly, when the ‘online’ thing began, web pages were written by techy folk.  As the technology matures, it tends to be 'handed over'. Accordingly nowadays, those who originate on-air content are seeing it as part of their role to think of bunging things online and on social media, rather than leaving it 'that chap in online'.

Maybe, though, because of the speed of technical change, the line between content and delivery is blurring the other way too.  Great technical folk can be assets in brainstorming – and self-originating content. A technical solution/platform can now be the answer to a creative challenge.  We're thankful for a new breed of frighteningly talented individuals ideally suited to the next generation of ‘radio’.  Step forward, James Cridland for paving the way.

The two divisions of the business are talking more.  At the annual TechCon conference, isn't it great to witness a few more familiar programming faces amongst the skilled technical crowd.  If you’re in content, you are missing a trick if you don’t spend some time with technical brains. They’ll help you understand how you’ll need to do your job within the forseeable future.  I also see a few more women sat on the hard seats at the Lowry too, which is the other welcome change.

The only emails about technical stuff used to be when something went wrong or was not fixed.  At last, the bright technical brains are getting the profile  and credit they deserve.  When something goes well, an OB or an award, the people rarely mentioned in despatches are technical teams.  And, almost without exception they’ll have helped in some way.

So, in case i ever forget again, may I just say, on behalf of all programmers, thanks for all you do.  We appreciate it genuinely.  And, to the, now rare, awkward 20th Century techies still working in this field who've no idea what your job really is, get your act together.  Most of your colleagues have.

*A three tiered tape cartridge machine - great for playing lots of jingles in a row out of the news.
** Gramophone needles. Fit in record grooves to make noises.
***The best headphones ever.  Oh yes.
at April 12, 2013