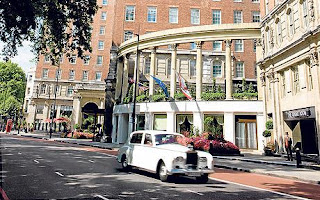 I'm not really sure what animal it is.  This slab of brown meat with a bone protruding.  Frankly, I dread to think quite how many animals have met their end so that a few hundred award nominees might feast.

Grosvenor House, London.   Nowhere else in the UK can quite so many people be served a simultaneous sit-down meal.  It is a remarkable feat watching the scores of smart waiters and waitresses emerge in a choreographed ambush once the signal to eat is given.  The Great Room of this dear house, which seats 2,000 and was built as an ice rink, is the venue for the annual Radio Academy Awards, the biggest awards in the radio industry calendar.
The sponsor arrangements have changed this year, so we must bite our lip and not say the S word, which is just as tough to accomplish as remembering that your radio has station changed brand. Hoorah, now, for the RAAs.

Apart from DAB, Rajar, UK Radio Player and arguing, this is the only time the commercial and BBC sectors do anything together.

This is the glittery night for our industry; and we are at our most visual. The women look stunning, in elegant frocks of those distinctive colours to which women attach a qualifying adjective; and blokes just call blue. Or red. Or green.  For men, life is simpler, a dark dress suit and bow tie. Unless you are very famous, and you wear jeans.

The room is filled with equals.  All have produced award-winning radio.  Multi-millionaire media moguls and famous judges mix with the spotty guy from an RSL who's never been to London before.  Those who thought Park Lane and Mayfair were just Monopoly deeds blink in the spotlights.  The little guy from the small station up North has clearly borrowed his evening attire from his tall friend. And as they walk up the red carpet from the street, they feel the momentary glow of pride as photographers briefly stare to establish if they're anyone important.
They enter the room calm and grown-up; later groping their favourite celebrity and grinning inanely whilst they persuade a random to take a picture for their mother to see.  Princes and paupers unite at adjacent urinals.  I recall the wonderful JoJo (Capital 105, Yorkshire) once running up to our table, dragging a reluctant judge roughly by her hand and producing her proudly to us like a  cat with a mouse:  'I've found my hero', she shrieked, 'Moira Stuart'.

We grew accustomed to the accomplished compering of the bulging Paul Gambaccini.  Each year, he sought to keep the ceremony shorter and shorter as the list of categories grew longer and longer.  More recently, Chris Evans has filled his shoes, but not yet his shirt.  It is, though, the gig from hell.  Nothing is worse that being a performer in front of performers.  Not least as the latter drink more and more.  Whether drowning their sorrows or celebrating victory the result is indistinguishable.  But colleagues who've been daggers drawn for years throw their arms round each other and confess they love each other really.  Everybody loves everybody on awards night. 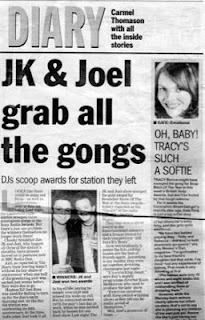 Over the years, a little like the Brits, there are those 'moments'.   The speech by Mark Story was but one, as he claimed his much-deserved accolade for co-ordinating 'Radio Aid'.

The list of those invited to present the awards over the years has been impressive, from Elton John and Dame Edna; to the great journalists and characters who've led truly remarkable lives. Each descends dramatically the grand staircase.

As a judge, one is offered a complimentary seat, which you can request be on a table of station colleagues, or with the randoms with whom you judged your category.  There is indeed, however, no such thing as a free lunch.  Judging is a helluva job.  Not least when you are tasked with arbitrating, as I have been in the past, on a speech radio category, where each entry is hours long.  Thankfully, the technology has moved on, and what was once a cardboard box of tape cassettes or mini-disks became a loaded MP3 player.  As the devices were generously allowed to be retained, those of us who have judged over the years have amassed a museum of the whole 1983 -2013 Sony range of player formats  from the Walkman onwards. Now, well we just get a USB stick.

As each category is announced, unspoken rules are followed.  You clap and cheer wildly for your own station, stations you once worked at, stations you respect, and stations which employ people you like. Clapping volume determined by the order in that list. You merely clap politely for the others, unless you're talking to a friend or forget. You shake your head and cluck at bizarre judges' decisions. You try to keep relatively quiet and respectful overall; in the knowledge that a women from Radio 3 on the adjacent table will tell you to ssssshhh if you do not.  Note the embarrassment and cheers too, as a recently 'axed' programme or station is lauded, as it inevitably is. 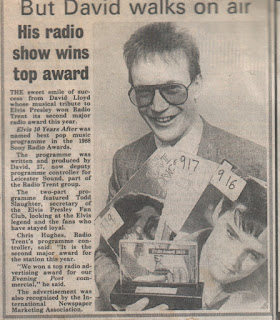 My only personal trophy is damaged.  Amidst my excitement, I dropped it running to the local paper for a photo call.  It's likely not the only trophy damaged or lost over the years in 'excitement'.   That was nearly thirty ago, although I've shared much vicarious pride in station awards since then.  All these years on, I still remember the moment of announcement, wending my way from a far table to the stage, hoping the applause would not lapse en route.  It's a bloody long way. By the way, it's an urban myth that there's a relationship between where you are seated and whether you are the victor or not.

If you are there at the ceremony; or you've been nominated for the Arqiva commercial radio awards later this year; or you're looking forward to the BBC local radio Gillard awards or the Student Radio Awards, good luck. You'll never forget it.  It's the one time when this quiet, intimate medium gets the public applause it deserves.

A final word of thanks to Sony for being a great sponsor for decades.  We appreciated it. And the warmest of welcomes to blinkbox music, PPL, PRS for Music, RCS and SGPB Hambros for taking the baton of the awards ceremony which recognises the finest medium of them all.