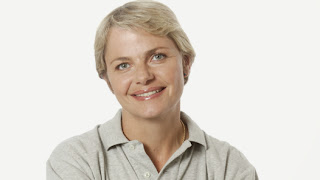 The Nation adores the tones of Alice Arnold, according to her Number One position in my AudioBoo Channel 2013 league table.

It's likely true that this way of evaluating audio popularity over the last twelve months would likely not pass muster with the IPSOS radio researchers, which is likely why this selection is so random.

But, here she is at Number One.  Alice Arnold.  And how she deserves that position.  Her Radio 4 farewell is the most played #RadioMoments AudioBoo in the last year, amassing around 7,000 plays. That sad gulp at the end as she realises that those last ordinary words spell the end of an extraordinary spell.  And, just maybe after giving away so little over the years on-air, listeners just wanted to hear that brief glimpse of the real Alice.

At Number Two, well, this is just an odd choice.  The briefest of bits of ancient, peaceful Radio 2 continuity.  In those cardigan days, this is how the Nation's lightest programme identified itself.  Put out the cat.  Put on a shawl.  Delightful.  Maybe why it has amassed over 6600 clicks.

At Number Three, another BBC farewell.  Radio does emotion well. This time, the valedictory words from

Robin Lustig, the chap who lent so much meaning to the phrase 'The World Tonight' for so many years on BBC Radio 4.

At Number Four, into the science of radio.  Whilst most radio stations already had talented folk programming the music with a careful ear on listener tastes, it wasn't until the advent of computerisation, that it became quite so obvious.  Some programmers welcomed Selector, others did not.  Presenters often hated it.  On this Boo, Clyde Programme Director Alex Dickson gave his thoughts in 1988.

At Number Five, the controversial chart moment. Should theBBC include 'The Witch Is Dead', in the week of Thatcher's death, in their Sunday Top 40 or not?  They did, sort of.

At Number Six.  A touch of geo-bias. A touch of commercial radio from my home town: the launch of Nottingham's Radio Trent  in 1975.  Just maybe I have so many Twitter followers from this great City, to whom the familiar voice of John Peters means so much.

More study at Number Seven. 3,900 plays for this piece on theAnnan Report; a 1977 BBC local radio piece on this report into the future of broadcasting.

Another launch at Number Eight.  Check this out.  The early moments in the life of BBC Manchester. And a song to die for. Little did those singers in 1970 know that their chanting would be a viral success forty years on. 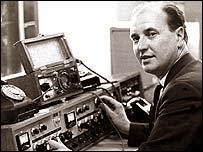 At Number Nine, a fitting entry from the very launch of the BBC Local Radio network.  Manchester was nearly the first station, but such were the funding issues, that Manchester fell from the early list and BBC Radio Leicester claimed the crown in 1967.

And no Top Ten radio chart should be complete without paying tribute to Eddie Mair. This is hardly a bit of classic Eddie though, it's simply what he said after he heard that BBC 90th anniversary moment in 2013.

At Number Eleven, staying with the BBC's 90th anniversary theme, a medley I assembled to commemorate that same occasion. The audio skips through those 90 BBC years in just a couple of minutes.

Number Twelve sees BBC News move to Broadcasting House' and at Number Thirteen, the launch of Radio Victory, the unlucky Portsmouth commercial station which was later to lose its franchise. Fourteen, with almost 3,000 plays, brings the Godfather of BBC Local Radio: Frank Gillard in action as a War correspondent.

Number Fifteen brings another great BBC local launch, thistime from Merseyside; with the truly wonderful Marjorie Anderson at Sixteen, one of that very small band of woman appearing on BBC radio in its early days.

The unmistakable pirate Radio London presenter, Dave Dennis sits at a surprise Number Seventeen, the chap who was later to run the National Broadcasting School and programme Radio Trent.  Another incredible voice is at Eighteen, that of actor turned BBC Chart presenter, Tom Browne, who added the sunshine to  those seventies Summer Sundays as he counted down what was the Top 20.

Back to Nottingham for the Number Nineteen entry, some birthday messages assembled in the 70s for Nottingham Hospitals Radio, but the attraction being that those messages were from the then stars of BBC National radio.  Finally another commercial radio launch, with Plymouth Sound at Twenty. I guarantee that one will make you smile.  Oh, the determination of presenter, Colin Bower.

This data reflect tastes and interests over the last twelve months until October 2013.  Were it over the whole three years of RadioMoments, the brilliant on-air resignation of Greg Stepp from American station, WFYV,  would easily qualify, as would the life-story of pirate/Radio1/comradio Steve Merike and the  Chris Evans appraisal of Chris Moyles.  And, with getting  on for 2,000 plays, that indulgent 20 minute medley of the launches of commercial radio over its first 15 years.

Overall, over 850 clips, and almost a third of a million listens of special moments from the greatest medium of all.  Thanks, AudioBoo.  Top up the wine.  Click.  Keep scrolling.  Enjoy.