How sweet does that DAB bouquet smell? 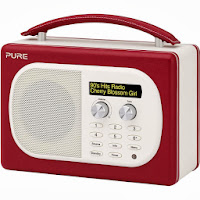 It smelt like a Scalextrix set.  It was certainly one of the first DAB sets in London. There it sat on my messy desk at the Radio Authority in London, alongside the pile of complaints about Talk Radio UK.  Huge transformers, circuit boards and other gubbins mounted on a 1/4" plywood base, assembled by the Authority's frighteningly clever engineering team.  It did not pick up very much, apart from test broadcasts, for this was the 90s.

Back then, the UK was some way ahead of the World in DAB.  The Broadcasting Act 1996 was a rare piece of law, enabling the UK to license digital radio multiplexes without further delay. I recall too working with the civil servants on that very legislation; and I recall with pride that one Clause of the Bill was drafted as a response to something I mentioned.  I forget which.  It wasn't that interesting. Those civil servants were genuinely clever guys too.  They talked to me, in enviable Received Pronunciation, about bright ideas they'd had in their drawing rooms. I was more impressed they had a drawing room.

Some folk muttered loudly back then that audio quality would set DAB aside. I remember finding that a bizarre conclusion.  Despite brilliant FM stereo broadcasts, those of us who'd come from the industry understood that most listeners were quite happy with a tinny 3" speaker in a battered battery transistor set in the kitchen.

For an AM upgrade, DAB audio quality was an asset.  For FM, it was not.  The real benefit, to me, was a greater range of stations.  Unique content, like films and sport drove the array of satellite dishes along the rooftops on Belgrave Road in Leicester, not BBC1.

Being such a small country, it's tough to provide as many stations on FM we might wish. There's

just not the room on the dial.  The East Midlands is a prime example: too close to other places with larger populations to re-use their frequencies.  It's likely apocryphal to suggest that David Vick, then the Authority's gifted Head of Development, didn't license many there as he found the region dull.  DAB is simply more spectrally efficient than FM, in that a whole cluster of stations can use a frequency.  Addressing a conference to the industry in DAB's early days, I explained how these 'bouquets' of stations would be licensed and regulated. Sadly that fragrant word has fallen out of use.  Let's bring it back.  Today.

It's all taken a very long time since then; and the World around us has moved at a frantic speed.  I remember speaking at a European conference in Brussels in the late 90s, the sort where they translate your jokes into 17 languages.  The message across Europe was clear: the technology was there; we just needed great content. The vicious circle was that few sets had been sold; and until they were, few radio operators were particularly interested in investing in content.

Another memorable Radio Authority decision was the selection of minimum bit-rates, about which there were rules in DAB's early days, to safeguard audio quality. This policy was developed at an earnest away day, as Authority members and staff were treated to excellent demonstrations just after lunch.  Listening to one bit-rate versus another, I remember feeling a little as I do at eye-tests when the optician asks: "Is thiiiiiiiis lens better.......or thiiiiiiis one?". "Erm", I say, "the first one". "I think".  Whilst some engineers will wince at some stations now, I don't recall too many listeners ringing in to me in my day job and complaining that Free Radio 80s is in mono.

What could we have done differently? Just maybe it was wrong to try, at the outset, to replicate the analogue licensing regime of local/regional and national, given that, were we to start analogue afresh, we might not have done it quite like that either.  Now, as the regional DAB tier is collapsed to free more frequencies for local, that original model  is indeed changing.  Are we sure that the latest route is quite the right one?

If DAB were a route to ease the frequency shortage, did we pause to ask whether the FM paucity was a challenge of our own making?  Just maybe, in the boom years, too many different FM stations were licensed; many of which did not, and will not, make a living.  Were we using the FM spectrum  in the best way to provide the best quality services to the greatest number of people?

DAB was seen originally as a replacement for analogue.  If FM is to stay, alongside DAB, for the sake of the smaller stations, then one might, again, re-visit the model.  If we are to have DAB and FM radio, and most receivers can receive both, how can we license stations on both those bands to deliver the widest possible range of services?  Is it not time for a joined up policy?

Another worry for me, about which I am not sure Sir Humphrey has yet concerned himself sufficiently,  is what will happen to the vacant FM spectrum when big stations do eventually switch over.  Pirate stations already cause quite enough problems squeezing into FM holes, without being able to squat on high power at 95.8 FM the day after 'DAB Day'.  What sort of unsavoury characters might be able to address the Nation?  That, to me, is a real civil concern with possible consequences far more serious that an annoying whine of interference.

It's easy with the great 'DAB debate' to emerge either as a confident advocate, regardless of the challenges, or as someone stuck with a fond attraction to good old FM.  This is too complex a matter to be simplified in these terms.

If we only end up with DAB offering a marginally greater range of programming than analogue did, it will be a squandered opportunity.  Let's work to secure the route which takes advantage of all UK spectrum, using both FM and DAB, to deliver the best possible listening choice in a sustainable economic way.  At this crossroads for radio, that would be a great result for this incredible medium of ours.

For old time's sake, I shall sign off with an old promo where I tried to explain AM/FM simulcasting to Derbyshire. Ahem.

David multitracked - recorded off AM!.