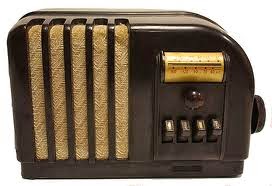 “It has already grown from the insignificance of an embryonic idea in the minds of technicians to the stature of a Goliath in industry and public affairs. Vigorously endowed and shrewdly directed, it has developed sturdily, and with lightning speed has fashioned for itself a place in our national life”

The book was written in America, back in the days when radio was but a small child, and self-appointed experts were penning articles and posturing about it.  Just as they do about this digital thing nearly eighty years later.

It’s a fascinating read.  It makes mention of an impressive early experiment, conducted when there was an appetite to understand better this new fangled thing.  An evangelist gathered an audience and preached in a hall.  His sermon was relayed by sound only, as if a radio broadcast, to a neighbouring hall.  As the call came for the congregation to step forward and participate, the genuine assembly started to take action.  Members of the radio audience in the second hall were not motivated in the same way.  They stood there like lemons.

The author explained he felt this was not through some flaw in this otherwise miraculous medium, but simply because the vocal delivery on radio needed to be different.  In structure, it was said that a live speaker works for “immediate rather than long-run results, for emotional fervour rather than for future action”.

“A radio spellbinder would have spoken quite differently. He would have used less bombast and more artistry, less brute force and more cunning. He would have directed his attention to the invisible audience and would have made each listener feel welcome as a member of the circle. He would have aroused the listeners' sense of participation in the occasion. "Friends, this is Huey P. Long speaking.."

All those years ago, the authors (Hadley Cantril  & Gordon Allport) had already recognised that radio was a one-to-one thing; and you had to address a single listener as you spoke if you really wanted to motivate.

The chapter observed that the voice on radio is different from a person addressing in real life in that:

Witness the medium’s educational prowess too. The publication suggests that radio improves the capacity of the average man to listen. And even “probably increases the vocabulary of the average listener”.

“It was discovered that the college student, with his long training in listening to lectures, is far better able than the untrained listener to understand and to recall what he hears. His advantage, furthermore,is discovered to be greater for auditory than for visual material. It appears, therefore, that intelligent listening is par excellence the mark of the educated man.”

“Although there is a prevailing tendency to use the radio as a background for other tasks, when the dial is turned to a specific program and when attention is directed fully to its message, an auditory training is provided for millions of people and its long-range effects may be exceedingly important. For increasing the world's population of "good listeners" radio deserves an extra star in its crown”.

So, if the boss ever tells you to stop streaming Gem 106 at your desk, just smile patiently and assure him that it’s training you to listen better to his wisdom.

“Take, first, the case of the housewife or the student who is completely preoccupied with work. The loud-speaker emits its stream of sound, but it falls on deaf ears. The distraction is completely inhibited. As long as attention does not shift, the radio's effect, if it has any at all, is entirely subliminal. In such a case the effort required (and unconsciously exerted) to overcome the distraction may actually enhance concentration on the task in hand.... The stronger the potential distraction the greater is the compensatory attention”.

Attention, RAB! The article goes on to provide early thoughts on the topic addressed in more recent years by Saatchi & Saatchi's 1981/1995 'Ironing Board Study' and Classic FM’s/Bournemouth University's 1995 'Jigsaw study'. The theory that listeners zone in and out depending on what interests them:

“However, attention is at best a restless thing, always waxing and waning, and shifting from one focus to another. The sounds of the radio are seldom inhibited for more than a few minutes at a time.  The mind wanders from the task in hand to the distracting sound”.

Some things have come to pass:

“In certain ways radio is a dangerous competitor of the newspaper.”

And some prophetic observations on the delinquent use of radio’s immense power: 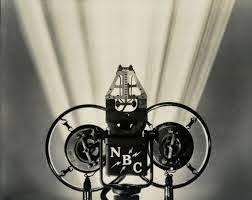 “The Nazi propagandist minister, Goebbels, uses it ubiquitously to spread the doctrines of Hitler and says that ''Some day the radio will be the spiritual daily bread of the whole German nation."

What about children though?

“About one-third of the children say that they lie awake in bed thinking of things they have heard over the radio. The same number report that they frequently dream of radio plots : three- fourths of these dreams are nightmares”.

Given American radio was, by then, already into commercial radio full throttle, the book also alludes to what later became ‘pester power’ in terms to children hearing advertisements and then lobbying poor Mama for said goodies:

“ The advertising appeal is ingenious and effective. It is directed toward the child's desire for physical superiority (victory at games and ''pep"). It comes just before the supper hour when hunger facilitates mental associations pertaining to food. It arouses the powerful motive of sympathy and compassion by asking the child to tell his mother about the product... Through repetition, tedious to the adult but interesting to the child, the association between the fantasy of the story and the product in question is indelibly established”.

What of station formats?

So, the truth is out.  In implementing 'The Future of Radio' in 2007, OFCOM just copied and pasted from this 1935 book for its Localness Guidelines.

By the way, according to the 1930 US census (which likely enjoyed jolly COI-type ads saying “fill in the form y’all”), there were suggestions that 70 per cent of homes were, were “supplied with radios”.
If the behavioural assertions above are to be believed, the rest of the homes contained thick Americans with fairly chilled kids.

Popular programme elements included ‘Dance Orchestras’ at Number 1 in the chart, followed by football and symphonies. Wow.  It’s commercial national radio. Absolute, Talksport and Classic.  Sports and old songs are in there too, in the next two positions, so thank goodness we have Smooth.  Least popular thing? “Advertising messages”.

How many stations in the listening repertoire back in the 1930s? 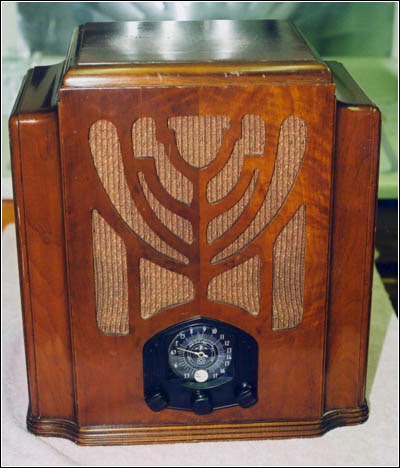 “The average listener is not accustomed to tune in to all available stations. His habits at the dial are likely to be rutted: 5.6 per cent listen regularly to only one station while 76.6% per cent never listen to more than three stations”.

All these years later, the ‘habits at the dial’ of the average punter are much the same.

There’s some handy listener research, suggesting that 84% preferred music programming, with the remainder opting for speech. It also suggests that speech is used as foreground listening and music as background.

Forgive me for just lapping up the experiments on presenter voices, conducted by WEEI in Boston involving the tones of  twenty-four male (but of course) speakers and over six hundred judges. They sought to establish whether people could judge appearance by a voice.  We must try that trial again. A great contest for your breakfast show, maybe.

They  found that it was challenging to establish height from a voice, although some favourable results were uncovered owing “primarily to the case of a short fat man whose voice was thick, mellow, and "chuckling." . Give that guy a job on Radio 2.

Voices were matched to  handwriting “about one and a half times as frequently as would be expected by chance.”

Photos and voices were matched with some success as was political preference.  Close your eyes. Listen to Nick Ferrari and try to establish which way he votes.

I shall leave you with a brief glimpse into Chapter 7.

“Most people would rather hear a man than a woman speak over the radio. Yet few listeners are able to explain this preference: they can tell neither how the sexes differ in their vocal appeal nor why. Even the supervisor of broadcasting at the studio can seldom give reasons why his announcing staff is entirely male.”

They resorted to another fab experiment with men and women reading articles into a microphone and  respondents were asked to score on various factors.

"Women were found to be rated higher in some qualities and men in others. In general men are judged to be more natural and more persuasive. Except in poetry and abstract passages, the listeners felt that men took more of an interest in the material they were broadcasting. In four out of seven experiments, women's voices were judged as more attractive".

Before the analysis, 95 per cent of the listeners had already stated that men's voices were more attractive.  The conclusion states:

“This result shows a noteworthy difference between stereotyped and analytic judgments. It indicates that the preliminary judgment was based to a considerable degree upon mere prejudice”

How far have we really come in 80 years?

Grab my book 'How to Make Great Radio'. Published by Biteback. https://www.bitebackpublishing.com/books/how-to-make-great-radio