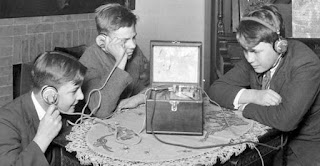 I handled an email a few weeks ago from an irate listener who was APPALLED at something they'd heard.

Actually, the presenter had simply not said what the listener had suggested. The listener had clearly misheard. We wrote back politely; and heard no more. I suspect they felt a little humble, or. more likely, felt we were making up our response.

Another of our presenters was chastised a few years ago for being thoroughly homophobic on-air. The correspondent deduced that we, as station management, must all be too. I was not of the view the remark was homophobic at all and had been completely misconstrued.  I rather suspect the complainant did not appreciate the irony of the general presumptions and assertions about the particular presenter and management - not least in the context of the jolly array of sexualities alive and kicking with pride in the entertainment industry.

Programmer, Jane Hill, reminds me of the complainant who called  with deep concern about the song 'Eff Off'. Not least because the chorus just chanted the remark incessantly.  I'm not sure the Motors imagined their vocals were likely to be thus misinterpreted when they recorded 'Airport;' in 1978. You'll never be able to hear that song in the same light ever again.

I live in hope that listeners might just give their chosen stations the benefit of the doubt, before leaping into angry exchanges. We usually try our best to stay on the right side of things; and where we err, a polite nudge would be appreciated. Don't presume the worst of us, not least because we fully appreciate that you have a life to lead and your ears are not always Sellotaped to the radio. 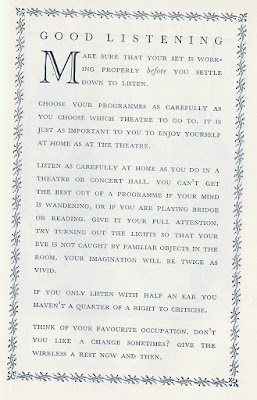 The BBC 1928 handbook suggests:  "Hardly ever does a critic admit in so many words that he is expressing his own views only". How true.

And for those music programmers getting furious with listeners convinced that a particular song has been played THREE TIMES in the LAST HOUR, rest assured it's not a new problem:

"There is, again, the impression that anything particularly disliked invariably predominates. To those to whom dance music is anathema it appears to be broadcast in every programme. A listener who does not care for talks cannot switch on without finding one in progress, and another who longs for variety entertainment is utterly bewildered at the interminable transmissions of symphony concert". (BBC Handbook 1928)

The BBC began to despair about listener behaviour. As smartly-dressed programme makers expended ever more effort polishing their performance, they got the view that some listeners just weren't bloody well listening properly.

The 1930 BBC Year Book dutifully, therefore, issued this wonderful Good Listening charter (pictured), which suggested "you can't get the best out of a programme if your mind is wandering".

"If you only listen with half an ear you haven't a quarter of a right to criticise".

I shall attach the jpeg to my next reply to unwarranted criticism.