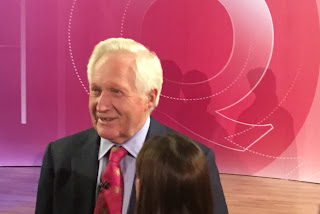 An invitation to attend a Referendum-flavoured BBC Question Time is simply too tempting a morsel to ignore.
Here was a chance for me to witness the interrogation of one side of this Century's great debate and, just as importantly for me at least, watch one of the great Dimbleby dynasty in their natural habitat. And, let’s be frank, this is a stolen radio format, thanks to ‘Any Questions’ dating back to 1948 on the wireless, and now hosted by his younger brother, so there were production lessons to be learned.
Participants are sought online at the outset. You're asked to divulge all but shoe-size, so the producers can legitimately select a panoply of folk and views. You're also asked to chew your pencil and dream up a couple of typical questions.
The phones of the lucky short-listers ring a few days later and a bright young thing checks that the audience recruits are still available and presumably that the chosen punters don't sound too odd. Again, you’re asked to volunteer two more questions.  That’s more difficult, when you’ve just woken up, you’re carrying a bag of washing to the kitchen, and you thought it was just another PPI call.
All in order, an email arrives inviting you to submit one more considered question, and advising that you’ll have a chance to devise a further one on the night. Twenty, maximum thirty words. That's a good technique for contributions: the ‘what else’ tactic to ensure that your question really is the best it can be, to probe beyond the bleeding obvious - and leave an opportunity for the last-minute topical angles.
Whereas queues to entertainment gigs typically comprise those of uniform age, dress and taste, the queues to these events are, by design an odd mash-up.  The spotty young lad sporting his dad’s twill suit jacket stands next to the crumpled bloke with the walking stick. Most scrolling up and down on their phones to avoid chatting to each other.
Security is tight. Both before the day and at all stages on the day, all the checks you’d expect - and a few more - are wisely and scrupulously discharged.
Once inside, the attendees, numbering 150 in this case, are thrown together in a room resembling a working men’s club, decked out with not quite sufficient tables and chairs, thus creating the sort of environment which prompts even Brits to talk to each other. ‘Room for a littl’un?’ Followed by that faux laughter. 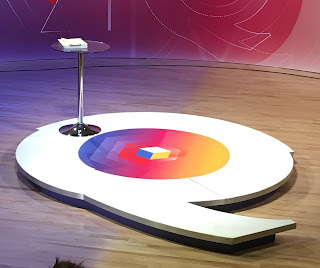 Before you can say 'the lady in the striped jumper', everyone is talking, enthusiastically exchanging views and trading lives with people they'd readily ignore anywhere else. The energy in the room rises – by design. Fuelled by biscuits and lukewarm tea, here’s the hubbub of an audience intoxicated with the prospect of helping to put Britain back together again.
Le Dimbleby sweeps in to perform an unexpected cameo in this ante-chamber. Like a great headmaster, his presence and a single quiet word is sufficient to hush the crowd.
He guides his audience for their roles. ‘This is your show, you represent the public'. 'If you want to argue with a panelist, do. If you want to argue with each other, do. If you want to argue with the person next to you, even better'. The audience are briefed, in good humour, on the personality of the, in this case, single panelist, so they can get the best from him.
More instructions follow. ‘Don’t say 'thank you, good evening' when I come to you. Just get on with the question’ (he hates the superfluous ‘please’ and ‘thank you’ as much as I do). 'When you're speaking, pull your hand down'. 'Don’t wait for the boom mic, it’ll come. Don’t look up waiting as it looks as if you are waiting for divine intervention'.  'Do clap. Do hiss'. 'About half of you are in, half out and a few ‘don’t knows'. But you’re all mixed up’. 'Please stay on the broad topic we're on, if you chip in'.
Eventually filing inside, the auditorium itself is dressed to look bigger and more crowded on camera than it really is.  Seats are taken almost at random, with a tad of direction, and you’re sat there for the duration – about two hours.
An hour of warm-up follows, discharged by an entertaining accomplice from the production company, Mentorn Scotland. He repeats David's instructions, and briefs the giggling throng on how to put up their left, then their right hands, do Mexican waves, and relax. Applause is rehearsed, both polite - and the vigorous version signifying angry British agreement. We are invited to 'get our selfies out the way'. We do. Before being told to turn phones OFF. 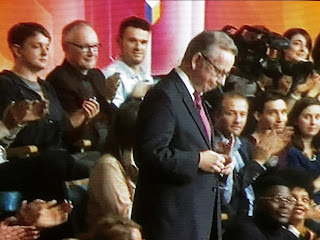 He then lobs a old chestnut topic into the crowd as a test, coaxing his audience to get used to putting their hands up and arguing with each other. After a cautious start, the sap rises. Three boom mics are deployed by lanky youths, with each allotted a section of the audience.
Dimbleby arrives in the main auditorium. His presence regal, his popularity of boy band stature.
Given this special QT was live, however, he had a further twenty minutes to fill.  An impromptu Dimble-bot question session ensued: ‘Do you find it difficult to remain impartial, David?’. ‘No.’ ‘Which way are you voting?’ ‘I don’t tell my wife, I’m not telling you’. His impish answers are perfect and delivered with comic timing.  I asked if he remembered his 1975 Referendum show.  Just like we radio presenters, of course he didn’t recall his own work. ‘What about your tattoo?’. ‘It’s got the wrong number of legs’, he confessed. ‘Do the politicians know the questions beforehand?’ ‘Never’.   No-one dared ask him if he really understood anything about all the social media channels he mentions every week.
What a remarkable man. This 77 year old veteran performer oozes star quality.  His face appears made for television with just a half-smile speaking volumes. This Referendum format also obliged him to stand for the whole event. And he’s another two of three of these marathons within ten days. He’s fit.
The questions have, by now, been selected from the hundreds submitted. I'm guessing they divided them into the key themes, then picked the best from within those, then checked that a satisfactory range of characters would be delivering them.
The names of the lucky questioners are read out; and the offenders asked to stand up for their seat number to be noted for the cameras and mics.  They are then summoned backstage to be briefed; and reminded of their question by means of a slip of paper. One imagines that, at this stage, the producers can still quietly decide to place some chosen questioners at the, ahem, bottom of the list.  All return, likely wishing they were somewhere else. 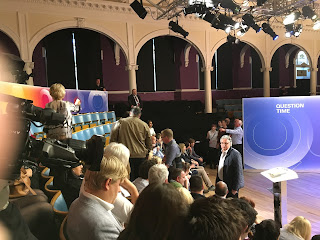 ‘When we come to you, do please ask the question you said you were going to ask’ reminds Dimbleby. ‘If we want to just chip in with something and it was a question we’ve already submitted but it wasn’t picked, can we?' ‘Do what you like' retorts Dimbleby, by now confident he can take the stabilisers off the audience’s bikes.
The floor manager uses a pre-arranged double hand signal to trigger the applause as the theme fades on the monitor and the suited guest arrives. The audience duly oblige.
Dimbleby begins his enviably brilliant performance. That gravity with a hint of mischief and stand-up which has endeared him, Day, Paxman, Ferrari and Humphrys to the nation.
What is less evident from a TV viewing is how well he orchestrates the chatter.
As the camera zooms in on the politician’s sweaty brow after a challenging audience missile, Dimbleby slyly winks gratefully at the questioner, as if to say ‘you scored’.
Whilst one of his eyes is fixed at the politician, his other, with laser precision, appears to glance at the next audience contributor and a furrowed forehead signifies ‘you’re next’. Meanwhile, his pen serves as a remote control to cue an earlier vocal audience member to bounce back after the politician’s squirming.
As a questioner ventures into a new territory, he flicks through his notes to make sure the next pre-arranged question sits in a complementary area. In spite of some evidently talented production resource in his ears, you can witness that David is doing his fair share on the hoof too.
Here’s a man who not only conducts the orchestra, he plays the cello and drums at the same time.
And then - like every great interviewer - he listens. He challenges the accidental asides that slip out from even the best-rehearsed mouths. His questions are short, each with purpose. 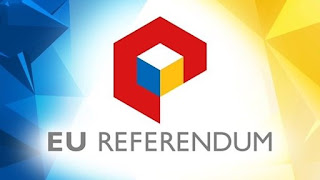 Whilst relaxed throughout, the stakes on this live show are high. As we know all too well, an unwise editorial decision or errant words can spark another BBC annus horribilis.
This programme, however, was a masterclass in bringing substance and style to air.  Balanced and slick. The right questions from a well-cast audience in the right frame of mind. Sufficiently well-organised and practised; with the framework for departures made clear.  The audience knew their parts.
In radio-land, with key programme strands, particularly involving listeners, do we sometimes leave just that little bit too much to chance?
And, marvelling at this chap's age, talent and experience, how many great older radio broadcasters  are now out of favour and tending their geraniums when they should be on the air?

Take a quick look at what was on the radio on Referendum Day 1975!
My book 'How to Make Great Radio' is out now, published by Biteback.