There really should be a prolonged round of applause at the next commercial radio knees-up for the brains behind the current campaign from RadioCentre, aimed at persuading key brands to spend a penny or two on radio advertising.

'See Radio Differently' is simply one of the cleverest concepts I have heard in recent years, and beautifully done.

It's little wonder that the ad agency behind it, ‘LuckyGenerals’, also won the coveted Twitter business and was highly acclaimed by the canny Paddy Power marketers. I'm informed that their 'elevator pitch' describes them as "a creative company for people on a mission'. Quick, is this your floor? 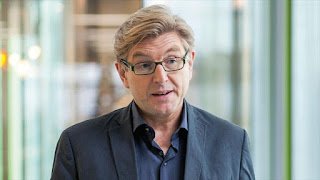 The RadioCentre campaign identifies the brand decision-makers who need to be persuaded that radio marketing would be good for them – and addresses them directly.

An early execution comprised a ‘shout-out' to Keith Weed (pictured), the Unilever boss, in the form of a hip hop rap: “you can be the leader, Keith Weed from Unilever”, persuading Weed that radio is “OMG to the FMCG.”

John Lewis’s Customer Director Craig Inglis was treated to a brilliant pastiche of the John Lewis Christmas TV ads. “Oh Craig Inglis, where have you been?”

The most recent one talked to L’Oréal’s CMO Hugh Pile in an Indie way.

The lyrics are clever – and the production impressive.  Like all great ideas, it’s simple.  And the concept inextricably revolves around radio itself, yet easily supported by outdoor, print, PR and social media. When Craig wants to follow up on the love letter he's been sent, there's a clever digital response route. It's been thought through with enviable skill, from Craig's perspective, and everybody else. Radio's a one to one medium - but we all know if you address that one person skillfully - its quiet brilliance actually influences 48m.

I wince as I concede this flash of inspiration is a far cry from most inward-facing campaigns on radio.  Despite the fact that radio should understand itself well, I’m not sure we've often hit the mark with many of our DAB campaigns – nor the old pan-industry ‘buy ads on radio ‘campaigns (remember Bill Bore concept?). They have failed to impress me.

Even worse are the ones we’ve all heard, usually locally-produced, on our own stations.  The grumpy local advertiser who likes the sound of their own voice,  reading a scribbled script saying how radio worked for them.  There is likely a story on his life and business which radio could tell brilliantly well to illustrate the point, but he doesn't manage it - and we haven't helped him.

And then there are the job ads. Don’t get me started. Usually written by a junior scriptwriter who listens to BBC 6 Music and who doesn't actually know the current name of the station he works for - and thus puts 'FM' where 'radio' should be in the script. It uses off-brand and off-target language and sounds like it's advertising for a person to operate the switchboard at an greengrocers rather than inspiring a bright individual to work in the world’s best industry.

If we cannot shine when we advertise our own properties on-air – we should give up. The driving objective for any job ad is surely to make me want to work for the company.  I don't need to know – at that stage- that there's a competitive salary and a parking space.

Back to the ads for advertisers. It is, of course, infuriating we have to bother persuading folk in agencies, who really should know what they are doing, of the value of radio.  Alas, however, too many agencies in shiny towering buildings are staffed by lovely bright young hipsters who tend to live a rather different life from the 90% of folk who listen to a hell of a lot of radio each week.

Let's note too that the vast proportion of the people with access to the biggest ad budgets are based in London. I recall one who, when told by one of our team that we had over a million listeners in Yorkshire, scowled and said patronisingly "I meant reach, not TSA size". She really didn't believe that so many folk lived up North - or  had electricity.

But – there is a job to be done – and the busy, gifted people at the top of the agencies and client-side can cascade our message if we bother to express it well – and RadioCentre bloody well has.


You can order a copy of my book 'How to make great radio'.