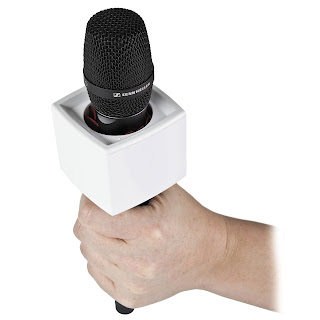 As the reassuringly smart newsreader delivers their glossy, lengthy TV news programme impeccably from their hefty newsroom, they sometimes seem oblivious to the breaking story vibrating on my iPhone as I lie on my settee eating a Time Out.

I imagine their phone merrily buzzing in their inner suit pocket as they think ‘shit, what’s happened’, when reading a jolly cue into a ‘why so few butterflies nowadays?’ package or something.

I recall hearing on BBC social media of Anne Kirkbride’s death thinking, surely BBC TV news will mention it in the half-hour news programme somewhere, even if they do not have an obit poised. They didn’t. Given dear Deirdre was covered amply later, I concluded this was not a matter of news judgement but just because they oddly hadn’t got round to it.

I was curious to establish the role and efficiency of broadcast in a world where those same broadcasters have their own social media presences. How speedy is broadcast media and what does it add to the understanding of a story?

The arrests featured in LBC’s 1030 bulletin; and the story appeared on LBC’s Twitter and on IRN's 1100 radio bulletin, a bulletin which ignored Vaz speculation, in favour of matters like Obama being insulted by other leaders. 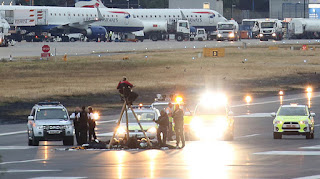 James paused to make clear, however, exactly why he was not bothering with the protest story. He said people will do silly things to protest and the more we talk about them, the more silly they will be. He has a point.

LBC’s travel news, however, in great colourful and useful conversational style was keeping us in touch with the genuine implications throughout the hour in a 'matter of fact' way.

At 1134, LBC Breaking Twitter had run with the guilty verdicts for the manslaughter of Elizabeth Edwards and her daughter. This was issued as a Sky Alert by 1143.

1142 saw BBC Breaking Twitter reveal the  protesters had been removed; and Sky Newsbreak Twitter relayed the Elizabeth Edwards story. 1145 saw the protesters removal on BBC TV. At 1149, James O’Brien at LBC briefly repeated his stance on the whole protest affair.

I do love the BBC’s comfy reassuring and leisurely weather forecasts up the hour on TV. I sometimes wonder what level of story would be needed to displace it.

By 12.00, BBC TV news had live pictures following the protesters removal, although you couldn’t see very much apart from a distant plane and some Lowry type figures nearby. IRN had a live reporter in the 1200 bulletin. 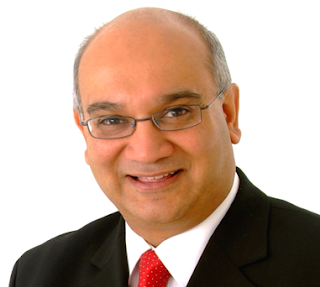 The ‘will he or won’t he’ resignation story from Keith Vaz rumbled on through the morning.

By 12.00, Sky’s  Darren McCaffrey  had Tweeted on his own account that he'd heard from a committee member that Vaz would resign.  Sky duly followed with a Sky Alert ‘Vaz expected to resign’ and accompanying Sky News TV ticker and discussion.

BBC TV News joined in at 1210, with speculation and comment. The correspondent did not share the same source as Sky, indeed their correspondent was altogether more bullish about Keith Vaz’s likely ’carry on as usual’ obstinacy, but he conceded that there were many opponents to that strategy.

Sky’s line was ‘he’s expected to go’. Auntie was sticking with ‘we’ll hear later', as probably befits the style and approach of the two news providers. “Committee to urge Vaz to stand aside’ suggested BBC News online, whilst the Sky News website stated ‘Keith Vaz set to quit as committee chair’.

At 1215, LBC travel reminded us that the airport was still closed. It is important, sometimes, for news providers to remind normal people what they need to know to live their lives when the excitement of a story has died down.

1230 LBC news declared the runway had reopened. 5 Live's headlines did not mention the re-opening and nor did the ensuing travel news.

By 1235, 5 Live had moved into topical discussion, and reflected the Black Lives Matter protest story with an interview on the cause, but without an update on the state of the runway. Presumably this is the sort of outcome the protest group desired; even if they were duly  challenged by an unusually animated Adrian Chiles and risked Nick Ferrari's Taser.

BBC TV news, was reveling in the airport drama, with a decent live Q & A about the protest from near the scene. I did like the commentator’s use of what appeared to be one white iPhone earpiece with the wire dangling down. I presume that was for cue and not because she got bored and was enjoying Drake as she waited.

Vaz is resigning! It's happening. BBC TV news was in front at 1239, with the confirmed resignation - and the full statement on screen. The resignation had arrived before news sources had indicated (1445). BBC TV won, but its tickertape slightly lagged the developing story.

At 1245, 5 Live covered the announcement and flashed efficiently to a correspondent. At the same time, LBC Breaking News tweeted it, and the main LBC account was Tweeting James O'Brien's angles.

At 1247, Sky TV were onto the matter, accompanied by a Sky News Alert and coverage on Sky Newsbreak Twitter.

By 1249, BBC Breaking Twitter had seized it (ten minutes after their TV channel carried it), retweeted by BBC News Twitter. Sky’s tickertape still suggested it had not happened, contradicting the in-vision story for some time. 1252 saw a BBC News alert, with a Sky News Tweet at 1253.

LBC usually rule with breaking news on radio, in my view, but it  was 1253 before they broke this story. The report, however, was typically engaging, with a natural dialogue  asking exactly the questions normal people would ask.

By 1.00, all news sources were Vaz-aligned for their news bulletins.There was no agony about the lead - and even IRN joined in at last.

Throughout the morning, Radio 4's news bulletins had updated hourly and artfully in the manner of an avuncular figure poking his head calmly round the drawing room door on the hour, gin in hand, to ask 'anything I should know?'". 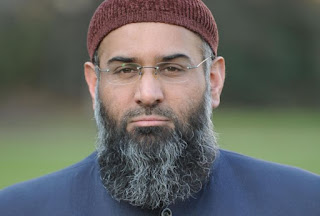 Just as I was poised to give up the exercise and reach for a glass of chilled Macon Villages, the news of Anjem Choudary’s sentencing flashed up on a Sky News alert at 1309.

First to the post on broadcast media was LBC, also at 1309. Shelagh Fogarty interrupted a call to do what LBC seems to do best, hold whatever they are doing to tell you something. Just in the way a friend would naturally but politely interrupt a conversation.

LBC Breaking Twitter followed almost simultaneously, with the line added to the BBC TV news ticker at 1310. 5 Live was engrossed in a package, but read the headline immediately afterwards at 1311, by which time BBC TV news was live from the Old Bailey. Sky Newsbreak Twitter was across it by 1312 and a BBC news alert was dispatched at 1313; BBC News Twitter at 1515. It was also on the BBC website at 1318, with Sky website just earlier.

It was an altogether exhausting exercise. I had in mind my old MD's comments that we shouldn't break our necks to be first with a story, as if they were listening to us they wouldn't know we were not first, although that rationale has diminished since social media descended. But, anyway, does five minutes matter - apart from to the puffed up chest of a heady journalist? Not least when accuracy is key.

The exercise did remind me of the importance of being aligned, and not forgetting a single ancillary channel as stories develop. Also, not allowing the rich and considered broadcast news and programming environment to impinge on the ability to interrupt, when necessary. That's what LBC usually masters.

It reminded me too of the 5 Live dilemma. The station can, of course, ditch everything to deal with a huge breaking story excellently, but has more agony when a routine rolling story conflicts with the daily array of deep personal and engaging stories. And - if it can cope in daytime, it finds it impossible in times of football fixtures. Is it perverse that, despite the efforts of many in the BBC over the years, it does not have a rolling radio news channel? 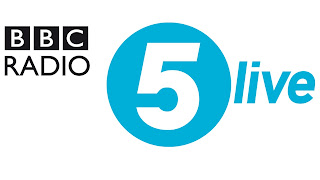 Could there a time when the excellent BBC Radio 4 non-news content sits online or on a dedicated channel, and Radio 4 becomes all news? That would leave 5 Live able to let sport lead.

It might make sense on paper as an option, but I suspect the might of the Home Counties green ink combined with pressure from the commercial radio industry would quickly dash the plans. Being radical is really difficult for the BBC, and it demands real leadership.

I shall put to one side, for this blog, content questions of how media should report protests; and whether, in general coverage on Sports Direct, 'duly impartial' should require, at least, some nod in the narrative to the many businesses who use zero hours contracts fairly to the benefit of both employee and business.

My hours of analysis reminded me of the value of analysis, reflection and human response which our agile radio medium allows. It also brought to mind the extremely high quality of LBC's work nowadays, even though newspaper columnists seem to ignore its existence.

More generally, how lucky are we to have what the Government would call 'plurality of views' in our news providers. They operate to a high quality with almost comparable speed and efficiency.

There are countries in the World who would, and do, kill for what we sometimes fail to treasure.