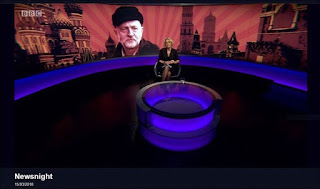 Today, it’s ‘hat-gate'.  Auntie stands accused of doctoring a pic of Jeremy Corbyn and laying it against a Kremlin background.

Across all social media, dreary threads are often to be found where angry people insist there is bias – and trot out examples to suit their case. The BBC, it is suggested, is part of the MSM (mainstream media) plot to influence the political direction of the country.

Similarly, when I issued a friendly tweet about how impressed I was by the diverse range of callers of all ethnicities witnessed on LBC one day, I received a barrage of unrelated responses. These posters, usually employing a puzzling version of their native tongue, claimed that LBC producers sit in the control room trying to find callers to suit a political agenda.

If anyone genuinely thinks commercial talk radio producers aim to find callers who simply agree with the assertions of the presenters – they are odd.

The callers’ voices heard on LBC truly reflect a range of fresh perspectives, and the eye-witness first-hand accounts on some of the topics of the day offer enviable insight. Insight that has changed my mind more than once – and sometimes the presenter’s mind.

Some comments even suggested LBC presenters were all Tories. I smiled.

I wish the social media warriors would pause for a while to question their own assertions with the high standards they demand of others. They claim a well-organised plot exists amongst media owners to deliver on an agenda. How do they believe this is organised? Not least when some folk claim the bias is Left – and others Right.

If this is a conspiracy, it’s not a very good one.

Is it alleged all UK broadcast journalists convene periodically in a huge conference room in some Holiday Inn, with those funny room partitions propped open?  Sitting through an endless Powerpoint presentation featuring colourful clip-art prime ministers and bullet point edicts. Addressed by a sweating chappie, lanyard dangling, they are instructed on the agenda, and subsequently assessed on political point-scoring in their pesky annual staff review.

No. This MSM is staffed by human beings of all persuasions with all their frailties and doubts.  Journalists are people doing a job – who go home at night and face for themselves the dirty challenges and choices of life.  They are trying to make sense of a complex world - and work out which stories to cover and how – and make the treatment of those stories vaguely interesting.

Life is not naturally tribal. It is not just about Left and Right - as the theorists suggest with their alleged concrete agenda – it is about shades of grey.  As tomorrow's voters mature - we should be helping them to understand the nuances. It is not about choosing a side.

Given the numbers involved, all journalists cannot possibly all be of the same political persuasion.

It’s time to calm down.

Does sub-conscious bias risk creeping into newsrooms – in story selection or treatment or language?  Given journalists are human beings, it is impossible to say it doesn’t. In my thirty years in the business, however, I have yet to meet one of these proud individuals who does not try their hardest to be duly impartial.

Does the nature of the individuals attracted to a media career affect their perspective a tad?  Possibly.  That’s why the ongoing efforts of all broadcasters to improve the diversity of their staff are to be commended. Said me, the working class Midlands chap with few qualifications.

The safeguard at all times is regulation. I was interested to hear a Russia Today journalist boast of their Ofcom licence - from ‘the strictest regulator in the World’.  The BBC – and others -  will get it wrong sometimes - and complaints have been upheld. These rare upheld complaints do not prove the conspiracy - they prove the system is working.

If you have a well- founded beef - there is a channel open to you if you genuinely care. Your random and often offensive Twitter assertions suggest you don't.  Don't be surprised that 'everyone agrees with you' either. Most people sensibly don't follow you.  Imagine how your son or daughter would feel, as a journalist, if they received the bile which some individuals have to suffer.

When a particular flurry of social media fire then graduates to an unworthy story in a press title, thoroughly entitled to be polarised, the social media warriors then convince themselves their paranoia has been legitimised.

To suggest that to change the hue of the Corbyn shot is a plot to make him appear closer to a far-off regime, is to forget that it’s probably just a hardworking gifted creative person, proud in their work, who wanted to make it look a bit better than bunging a pure colour shot lazily on the usual background. They were likely thinking more about getting down the pub after the shift than causing a political revolution.

Broadcasters are getting wholly sick of ill-founded and often wholly irrational allegations. Social media gives a voice to indecent people who have rarely troubled to read the substantive article linked to any Tweet.

Please go away. Read some books. Study some articles. Speak inquisitively to some people you don’t agree with. Open your eyes. Go do some good.

It's never perfect - but we truly have some of the finest, most objective journalism in the World.