News Content on Smart Speakers - an Opportunity - or a Threat to Radio - and Democracy? 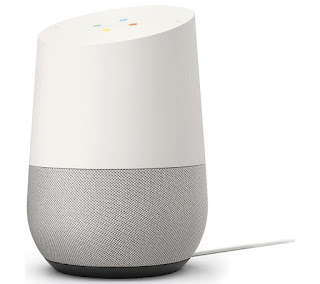 I just shouted a cheery good afternoon to my Google Home - only to be assailed by a 3-minute BBC news bulletin. Then Sky news barged in for their 2-minute version, then CNBC. And I only said 'good morning'.

Alexa was in no mood to help on Amazon Echo, she just read out the day’s anniversaries coupled with an unfunny gag. I had to demand the news from her – and then she personally uttered a staccato 2-minute bulletin, with ‘continue reading’ prompts. Reading? I’m listening! Then, I was treated to the Sky news bulletin – and then the BBC news – followed by a Radio 4 podcast.

Is this what smart listeners want? If we are not sufficiently inclined to turn to the news channel on TV or a rolling news radio station, are we not just seeking a quick injection of news to arm us?

Have the new purveyors of news simply followed the norms of traditional radio? I’m not convinced it’s the answer. Is it really a ‘flash briefing’, as they claim, or radio news-lite?

As I’ve argued before, I’m not awfully certain that even bulletins on radio proper would often sound as they do were they invented today. In essence, they are still the original 1922 Arthur Burrows newscast - but read in various durations, delivered in a less plummy accent spiced with a few clips and a Wisebuddah jingle.

So, what of these smart news updates. They have a place for sure - and increasingly so as voice-activation in cars leaps forward. The Reuters Institute for the Study of Journalism, however, confirms suspicions on their effectiveness. It suggests briefings are too long, not updated frequently enough, too repetitive; and not listener-focused. They are certainly not valued.

Do we still want a bulletin at all Do we really want a shopping list of stories, most of which I may not be interested in?

If we do want a ‘bulletin’, maybe it should be very brief. Sufficient to make sure I am up to date, and able to go elsewhere for detail should I wish. That’s how smart speakers treat weather forecasts.

Conversational too, without the familiar rhythm of the usual radio newscast.

‘Theresa May’s won the confidence vote in her leadership - she’s back in Dublin today; house prices are down to their lowest level since 2010; patients spent more than 1bn on health care for the first time this year; and President Trump’s former lawyer’s been jailed for five years.’

It’s odd that there is still miraculously exactly three minutes of news in the World – or two minutes if you're in Sky’s world.  In the absence of broadcast schedules and windows, maybe the news can now be as long or as short as it needs to be.

We are told that bulletins will be able to be thoroughly personalised to our tastes and interests. Well, I do hope that it’s more useful than my Amazon ‘more like this’ list. Do many people really use the personalisation features which several news sites have devised over the years, or do we prefer someone to do the choosing for us? Google’s developing an open audio news standard, automatically generating a playlist of stories based on your interests using the same technology behind the AI on Google News itself. 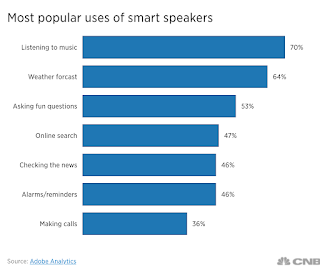 Journalists in newsrooms assembling their bulletins have always used their manual human algorithm for story selection, and maybe we will continue to prefer to delegate the task to our chosen news provider. In which case, winning that ‘trusted and best-known brand’ status is the war in news which will be won and lost (and that is the case with all content selected by voice - notwithstanding platform deals). As for demographics and interest, ‘Radio 1 news’ would likely suit a Radio 1 listener.

Will trusted familiar news ‘personalities’, independent of any broadcasters, start to rule the roost? ‘Tell me the news, Howard Hughes’.

By contrast, if my news is from Google, to what extent do I know the provenance of each story it has seized?

In a world where anyone can deliver all manner of dubious content, might there usefully be a ‘kite mark’ to state that a news provider is following what was the broadcast Code? Around a quarter in the UK (23%) and nearly one in ten in the US (7%) could not remember the brand that produced their daily news update (Reuters/Uni of Oxford). The BBC sonic logo is canny (but should it be more distinctive and pan-media?). And now, a chance for Global news to become just that.

As we have witnessed in social media, if we choose our own mix, algorithmically or personally, there is a danger we surround ourselves with stories about the like-minded, if all the stories we hear are like the ones we’ve already shown an interest in.

However, having the centre of gravity of your news source adjusted to ‘near me’ carries value. At present, on smart briefings generally, my weather is local, my news isn’t. And that would allow, at last, a series of sensible decisions on localities and regions, unencumbered by the puzzling made-up regions from today’s broadcasters.

Maybe the stories should be available by generic name. Do we just want to say ‘news - Salisbury poison’ for the single story I’m interested in? Witness here in the brief video, we've not yet mastered that.

Maybe a different complementary platform may be utilised too. The ability to request by voice from a flash briefing, say, an automatic email with a lengthy read on a key story.

I know I’m not alone in choosing a podcast on the basis of content first, and duration second. Just long enough to accompany what I’m doing. Maybe we just want to have a preference on bulletin length. Google says it’s working on a 15’ piece, with short stories first, moving then to longer length. You can skip stories too, but I’m unsure whether listeners want to go to that effort. It almost defeats the object of this ‘convenience meal’.

The latest word is that artificial voices will be able to deliver the bulletins, and progress is so swift, I can see a day when this will be commonplace. Indeed, Alexa is about to start reading Emails to US consumers. Amazon is using “neural text-to-speech” technology or NTTS - the next generation of speech synthesis. This generates truly expressive voices more quickly, based on the rhythm and style of real newsreaders, rather than just stitching words together. Let’s hope they chose the right influences - and not one of those puzzling folk hammering out and hanging onto the last word of every SENTEEEENCCCCCE.

It’s a fascinating world and one which will be, as ever, listener-driven. I am not of the view that video will rule this domain, it will forever be ‘radio’s’ territory. Whether it will be the province of existing radio players is another question.

Smart speakers currently enjoy just a 3% share of all audio currently (Rajar Midas Autumn 2018), so there is some time to get this right.

We need to establish afresh what smart listeners might want and what can be delivered. Start with them - not with the radio norms. Newsrooms will change their working methods utterly. I suspect the style may fore-shadow change in radio bulletin delivery too. Maybe we can decide when we want to interrupt our listening to Smooth with a brief update from the Smooth newsroom.

Thanks to brilliant brains, the technology is the ‘simplest’ matter. The biggest challenge will be to ensure that - whatever the delivery format - the trusted news voices remain easily and universally recognised and consumed, and the journalistic foundation be sufficiently well-funded. Those issues are fundamental to our democracy.


Follow @TweeterStewart for good stuff on all this - and @JamesCridland's @PodNews newsletter is worth subscribing to too.

Here's a Christmas gift for a radio-loving friend.

My book Radio Moments tells of the last fifty years of radio - from the inside.  A  very personal account of growing up with radio, before becoming a tetchy jock  and then a hassled MD and programmer. The laughter and tears of an  unrepeatable era.

Also 'How to Make Great Radio'. Techniques for today's presenters and
producers.  Great for newcomers - and food for thought if you've been doing it
years.