Mug or a sticker? 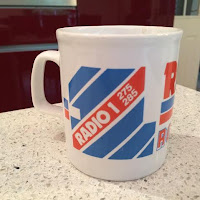 It's the only mug I never drink out of. Such happy red and blue adolescent memories, brought back by the best radio logo in the World. The Radio 1 Thunderbirds logo.  To me, that earthenware mug is worth more than a piece of Clarice Cliff.

Not all radio station merchandising ends up being quite as precious. There was much excitement when Graham Knight, presenter of the then compulsory lunchtime magazine programme at Radio Trent, took delivery of his merchandising.  Gaudy, cheap, purple pens had been ordered, inscribed with the name of his programme 'Trent Topic'.

As Graham  opened the big box, his face fell as he realised the printers, less familiar with the programming demands of the IBA, had printed 'Trent Tropic' instead.  The pens were never sent back to whichever country had printed them; I think we gave them away on the programme one fortunate hot day in what must have seemed like an immaculately planned Summery contest.

Radio stations loved merchandising. Back then it seemed cool to show the world which station you listened to.  Some individuals would happily live their lives wearing a branded T shirt or sweat shirt.

On acquiring the old Centre Radio premises from the liquidators, the eager marketing manager at its replacement, Leicester Sound, scratched his head on what to do with a million T shirts bearing the name of the station's ill-fated predecessor.  Probably over a drink at the nearby Marquis, the idea was hatched to overprint each with the new logo and word 'recycled' .  An idea ahead of its time, actually.

Leicester Sound loved its merchandise.  We had sweet little teddy bears with logos on their chests; and long promos on-air boasted their merits.  Wonderful Wendy on reception also sold branded, baggy boxer shorts.  These were the Nick Kamen days when baggy was in. They were available in small, medium and large; although a surfeit of the latter appeared to be sold to most of the visiting listeners, as I recall. With male and female options in stock, Wendy would ask whether they sought ones with an opening - or without. 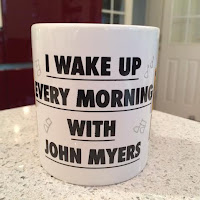 Thinking back, in those days, Leicester Sound probably earned more from merchandising than the radio business. Mind you, they were tough days for the medium. Profits from the Coke machine even helped. For most stations though, despite the best of intentions, merchandising stock attracts dust and bills. The size of the order inversely proportional to the likelihood of the presenter or station name/logo remaining sufficiently long.

Mouse mats went through a phase of popularity; as did baseball hats and furry bugs. James Cridland reminds me that Viking in Hull offered skimpy knickers bearing the station's mascot 'Eric the Viking', until the idea failed to find favour with the station's new owners. And the there were the Pennine radio rain-hoods for those rainy Bradford days.

Mugs have been the great survivor. Some stations still have them. You cannot not find  a mug useful. It always has value. Some stations, however, would be well advised to seek advice on the design and wording before pressing send on their order; especially BBC local stations.

Car stickers too endure. Some stations, again, seem tempted to devise creative designs which can only be seen as you crash into the car in front. 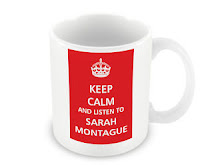 In fact, all these years on, everything has changed about our medium: technology; ownership; brand names; music; presenters; regulator; and ownership. The only constants are arguably just those mugs and stickers.

Do let me have a pic of your favourite example of station merchandising.Just for fun, of course.

My book, 'How to Make Great Radio' is out now, published by Biteback. 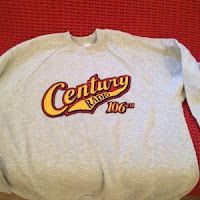