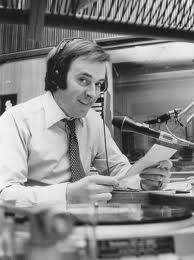 How on earth did this lovely, quietly mumbling man attract an audience of millions?

No teasing.  Little ‘sense of the day’.  No callers.  No stunts.  No giggling sidekick.  Not slick. No crazy competitions.  No showbiz.  Few weather forecasts.  Incestuous talk about his radio team.  Interminable ramblings about the mundane.

But, like most great breakfast shows, he broke the rules and won.  The phrase ‘radio legend’ was made for Terry Wogan.

Despite his audience of millions, Terry enjoyed true intimacy with the listener.  Every listener felt he knew them  - and that he understood them.  From the shawled-pensioner in an icy semi to the savvy student from a magnolia flat; each listener heard a different show in their own head.  Although he likely earned a touch more than either of them, they felt this seemingly self-effacing man was still ‘one of us’. Like Blackburn, this man grew not to take himself too seriously, with some success.

The Wogan vocabulary was his weapon.  With enviable skill, he carved each sentence; turning a mundane anecdote from a black and white photo to a colour film with a beautiful array of words, delivered with vocal warmth through an increasingly fruity voice.

Tales founded on fact  would be emebellished with a Wogan flight of fancy.  A few words from a 'listener' on Basildon Bond turned to gold in the hands of the master.

His artful pauses too.  Terry possibly made as much money in his career from saying nothing as saying something.

A little like Bernie Taupin, his rich career began when a chance newspaper recruitment ad rescued him from the banking world.  Presumably charming the interviewers, he was signed up to RTE.  As the early recordings of Moyles suggest too, distinctive  broadcasters do not begin their careers with their trademark styles; but you can hear just a hint of the endearing future Tel on this early clip from the Emerald Isle.

When work began to dry up in Ireland in 1966, Terry rattled out a quick missive on the Remington to the BBC.  Auntie responded with the offer of a few programmes ‘down the line’ for the Light Programme, before a fledgling Radio 1  beckoned.  In the days when programmes had titles, he hosted the wonderful ‘Late Night Extra’.  After some relief presentation and holding the JY fort, afternoons became his home, simulcast by BBC Radio 1 and 2.

Terry ascended the Radio 2 breakfast throne in the Decimal days of 1972, entertaining the Nation with his ramblings, interrupted only by JAM jingles and pan-pipe music. 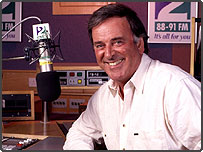 He signed off from Radio 2 in 1984 to dedicate more time to his TV career, wearing those brown suits we all wore back then.  Whilst he did TV possibly as well as most radio folk, he was still at his best when, as in the Eurovision, we couldn’t see him.  Like many in the radio fraternity, you got the feeling he did his best work when he felt no-one was really watching.

Come January 1993, he returned home.  Terry was one of very few presenters ever to host two long spells on a significant breakfast show on the same station.  By now, he’d become the eponymous hero of ‘Wake Up to Wogan'; and he'd truly found his act.  That's the stage at which a performer truly matures; and the audience give them permission to behave unthinkably on-air.  One got the feeling that detailed show prep was not high on his list of priorities, but it mattered little. A listener's broadcaster, not a radio anorak's.

As a professional, he carried himself through his career with skill.  Being sufficiently true to himself when speaking about the Corporation's idiosyncrasies, but stopping short of going too far.  His humour and stature softening comments on music policy, radio, or BBC antics which might have sounded unwise from others.

His handing the Radio 2 breakfast baton to Chris Evans at the end of 2009 was text book.  One could detect the signs of two performers respecting each other’s very different talents.  I suspect it was well-choreographed too; but one got the distinct feeling that he agreed with this unlikely succession plan.  If he did, he was right.  Here he was, fondly letting his mischievous radio ‘son’ have a play now, probably shaking his head lovingly at the Evans antics like a tolerant father.


If proof were needed of his talents, watch his farewell speech below. Radio is rarely perfect, and that’s why we love it.  But this is.  Truly perfect delivery. As mentioned in my book, the pace was 165 words per minute, a little faster than his normal speed, but slower than most broadcasters. Terry delivered every valedictory word from the heart, as if to a close friend sat together in the living room. In truth, Tel was surrounded by producers and the nosey, gazing at a typed script, and read every word.  Immaculately.  Note how he gazed into the eyes of his listener throughout, never those milling around; possibly the secret of his art in those 28 successful years on earlies.

Wogan returned for what his to be his final broadcasting home in 2010 for Weekend Wogan on Radio 2. Whilst a live audience situation was arguably not the best home for the Wogan skill, 30,000 people were said to have applied for a seat in the audience, gazing at his mastery.

"I’ve always said that I hope I’ll have enough sense to get off the beach before the tide comes", said Terry.  He did.  We'll miss him and we'll remember him.

Alan Dedicoat and Ken Bruce reflect in 'The World at One' on Radio 4
Terry's last 2009 breakfast show in full, thank to Andy Walsmley

My book 'How to Make Great Radio' is published by Biteback