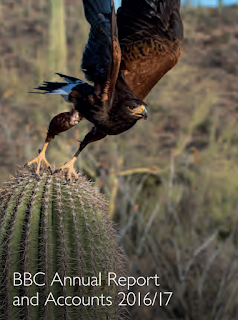 I’m not saying that the BBC sought to bury the contents of its Annual Report and Accounts for 2016/17 by publishing its stars’ salaries on the same day, but the necessary timing had that effect. Actually, it was probably more tempting to try to bury the salary stats instead.

Onto the report itself, the BBC says it’s been a “busy year”, with the new Royal Charter etc. They’re right. They're emerging from a painful period of left-field challenges, only to enter a time when the broadcasting world is fast-changing around them. It's not easy.

The Chairman pledges: “I want the BBC during this Charter to be defined by boldness, originality, and risk taking”. Agreed.  Meanwhile, the DG worries about the decline of young audiences to TV and radio; yet is reassured that Radio 1 is the biggest radio station in the World on Youtube.

The report states rightly that, “despite global competition in audio, BBC Radio remains an integral part of British daily life – informing, educating and entertaining 34.7 million people every week with an unrivalled range of speech and music content”.

Aside from the arty pic of Monty on the Today programme, radio merits its first substantive mention with a justified plaudit for the Archers’ domestic abuse storyline on Radio 4; which I concur was handled brilliantly across all platforms, with social media to die for.

I know we wouldn’t get far without mention of Hull. We’re told that “The BBC is a key partner for Hull’s year as UK City of Culture". I also suspected, rightly, that we wouldn’t get a mention for the cheerleaders for the project on BBC Radio Humberside. Perhaps that local station never mentioned it.

In general terms, the BBC highlights that since 2014, 1% of its workforce has been made up of apprentices and there’s to be a £1 million scheme to train journalists with disabilities.  The BBC says it also remains committed to developing the best in new talent through such schemes as Radio 1 and 1Xtra’s 'Where It Begins'. 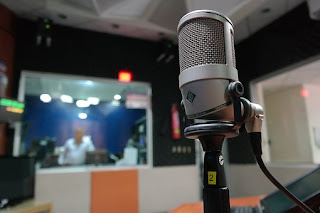 The BBC aligns itself to its five purposes.

To provide impartial news and information to help people understand and engage...". Radio 4 merits specific mention for the Today programme's highest ever audience figures.  Whilst the imminent 'local democracy' reporters are trumpeted; BBC local radio's immense existing efforts in that field are not recognised.

Learning. There's mention of the 1.1m volunteering hours pledged in  Radio 1 and 1Xtra’s #1MillionHours campaign; and Radio 2’s inspired '500 Words', in which 120,000 children wrote short and creative stories. I heard a family chatting about it on the train; it's a credit to Radio 2 and to the BBC.

Creative, highest quality and distinctive. The Archers is given due credit here again, as is the Radio 3 programming celebrating seven decades of pioneering music and culture. The 13 golds at the Radio Academy Arias  and Radio 2's 'best national radio station' award are also offered as evidence.

It is noted that BBC radio partnered with Spotify, Deezer, Youtube and Apple on the BBC Music app, and they boast ‘BBC Introducing’ continued "to team up with the National Skills Academies; and that "BBC Local Radio  help build production skills among young, emerging musical talent”.

Reflect...and serve diverse communities...and support creative economy. It is noted that local radio in England draws in 6.4 m people each week, of whom 1m people listen to no other stations. That solus figure suggests that audience really does need looking after. They note a quarter of them listen to over ten hours per week, which is the sort of stat I used to be guilty of pulling off in the absence of decent headline figures.

Transgender Love on BBC Scotland merits mention, as does the role of the national radio stations in reporting the devolved elections of 2016 and again in 2017 in Northern Ireland.

Reflect the UK, culture and values to the world. I am simply - and honestly - in awe of what the World Service radio does, as part of the BBC World Group activities. The investment is highlighted, delivering services in 12 new languages, enhance output in the Middle East, Africa and Russia.

Strategic Objectives: Although the BBC is proud of its audience reach, it expresses concern about the disparity between light and heavy BBC users, aiming to appeal more effectively to the young, ethnic minorities and audiences across the nations and regions, noting the importance of distribution in delivering this. It is to strive for ever better global reputation for quality and Worldwide audience reach.

In making the BBC  a great place to work, it's "making our ways of working simpler, removing complexity and making it easier to understand what’s going on".  That will come as a huge relief to every single person - not least those of us who have got suffocated in BBC systems. It also will manage the BBC in a way "that provides financial stability", so they're going to watch those budgets like a hawk.  They need to.

Strategic Priorities: The BBC plans to grow iPlayer; review the brands; and 'personalise', attracting 20m 'BBC 'members'. It's a decent tactic. Younger audiences (0 to 34) will be prioritised

Audio will be reinvented, moving it from "predominantly a catch-up and broadcast-focused experience to a fully personalised experience with the user at its heart", offering "greater flexibility of format, more short-form and podcasts to sit alongside the long-form live and on-demand offer".  They'll also revitalise the education mission; better reflect the diversity of the UK in their employees; grow the World Service; become Britain’s creative partner: and, for completeness, grow BBC Studios and BBC Worldwide. 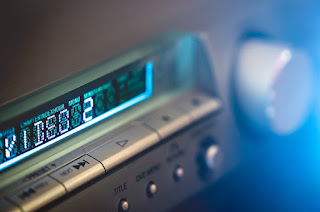 The report hails the achievements of  BBC Radio 1, championing UK music to a young audience, with 61% of playlist additions coming from UK artists.  Radio 1’s videos have received 1.4 bn views on YouTube and they mention the station’s Teen Heroes were welcomed to Kensington Palace.

1Xtra Live outreach sessions enabled youngsters to learn about the music industry and BBC Asian Network Live represented the best in Asian music. 2m people watched Sounds of the 80s on the Red Button. Its dedication to showcasing a wide range of specialist music is stressed, alongside celebrating Black History Month and Sir Terry Wogan's memorial service.  Other highlights include: BBC Radio 3's premiere of an undiscovered Joe Orton play; a new Matthew Herbert commission; ‘Pass the baton’ dedicated to performances by BBC’s orchestras and UK choirs; and the BBC Proms and the  ‘Proms at…’ series taking the festival to a carpark in Peckham. And why not.

What else are they proud of? The  BBC Reith Lectures; the dramatisation of Primo Levi’s Periodic Table; Melvyn Bragg's celebration of  the North of England; Jeremy Irons reading the complete collection of T.S. Eliot and the series of documentaries analysing The New World as 2017 began. Comedian John Finnemore took over Radio 4 as the Lord of Misrule; Radio 4 Extra brought classic musicals from the radio archives; and Angela Barnes took over as the host of Newsjack.

It's reported that 4,000 listeners contacted 5 Live the station the day before the Brexit vote; and that the station launched a competition to find the Young Commentator of the Year. There was live coverage of the Rio 2016 Olympics and the Paralympics, plus coverage of Euro 2016.

The station which was nearly no more, BBC 6 Music,  is hailed as the most listened to digital station. Its Music Festival broadcast live from Glasgow and there was the ‘Art is Everywhere’ season.  The station supported BBC Learning’s #LovetoRead campaign; BBC iPlayer Radio launched improved station homepages; and BBC Radio and BBC Music achieved record online audiences for Radio 4 and big music events.

There's mention of the pop-up radio stations such as BBC Music Jazz and Radio 2 Country.
It's stated that BBC Radio finalised its new Commissioning Framework, opening up 60% of eligible hours for competition from the independent sector; and that BBC Music’s year has seen a rich variety of initiatives across television, radio and online. 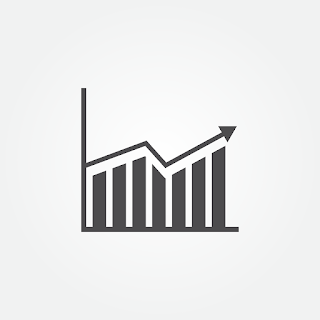 In the measurables for the national services,  Radio 1 is the only service to show marked audience change, with its reach down from 19.3% to 17.5%. Spending is up appreciably at 1 Xtra ( +£2m) 6 Music (+ £2m) and Radio 2(+ £7m), with the cost per listener growing at the digital services. Appreciation remains largely stable.


News in the UK

The report stresses how 5 live news brought "the full range of public opinion within communities to our story-telling in often fascinating, sometimes poignant and ever thought-provoking radio". The programmes on the 50th anniversary of the Aberfan disaster are one example.

Across England, "the BBC’s 37 local radio stations continue to serve, reflect and champion their areas, while holding power to account and providing an outlet for original local journalism".

The report suggests: “It’s easy to take radio current affairs for granted”.  I worry that the BBC rather does.  I agree that radio “sets the standard for intelligent story-telling and investigative journalism". The report rightly trumpets the brilliant ‘50 Things That Made the Modern Economy’ and Intrigue: Murder at the Lucky Holiday Hotel.

It's reported that listening reach to the BBC World Service rose by 10m.

And, as we've noticed, the BBC promises to be “unashamedly Hull-centric” to mark its City of Culture status. "A host of our programmes have been to Hull to broadcast from the city, including Radio Two’s Jeremy Vine show and Songs of Praise. On New Year’s Eve, Hull became the first city ever to guest edit the Today programme. Our regional and local services have been providing extensive coverage of the events". This may even be a quiet nod to the valiant Radio Humberside. Yes?

Cutting property costs is a key strand of the BBC’s efficiency plan. A new financial deal is said to have significantly lowered the ongoing cash costs of Broadcasting House, in London. Although the licence fee  was flat at £145.50, there was a 1.2% reveuue increase due to household growth, closure of the iPlayer loophole, and improvements in fee collection.

I doubt many people read annual reports. That's not the BBC's fault.  In largely looking back, as they must, they are less illuminating than the forward Plans or the proposed Ofcom operating licence.

But I do worry that sometimes the quiet brilliance and influence of radio is not always demonstrated as much as it might be; and the importance attached to it in this report might say something of its profile within the Corporation, but that's been said for decades.  Now, however, we have an added competitor for money - and profile - in digital.

Whilst the top-line audience figures of radio always make great reading, the particular programmes and content which really deliver the bulk rarely merit much of a mention.  Again, maybe every organisation's annual report is a tad like that.

And, as ever, I sometimes worry the BBC forgets it has a local radio network and the information, news and companionship it provides.


Grab a copy of my second book 'Radio Moments'. A look at the last fifty years of radio - from the inside. A personal journey from the little lad who just wanted to work in radio.