Who's Listening and How? 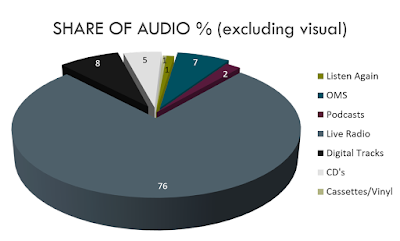 The diligent folk at Rajar are unassuming. They don't shout about all the canny analysis they do.

They are pretty good at acronyms too.

MIDAS is their excellent 'Measurement of Internet Delivered Audio Services' survey, designed to provide context and insight into how audio content of all sorts is being consumed. Like radio features, I'd wager the name came before the definition. 2,000+ patient Rajar respondents are knocked up again and asked yet more questions.

It’s an impressive seasonal project, giving those 'share of ear(time)' stats we know and love. I just wish those cocky characters at the big ad agencies would just put down their Costa Coffees and stare at these pie charts through their straggly beards once in a while. Yes - things are changing – but radio is still far, far bigger than Jack, Jake and Josh think.

What is radio's place in the league table of audio entertainment? Taking away the time spent watching TV (with its own audio), the Midas Summer 2017 data  suggests radio commands an impressive share of ear-time: 76% (75% last Summer). You'd only need half an ear to consume all the other sources of audio entertainment. Your other ear and a half are owned by live radio.

Despite being able to receive radio nowadays on everything apart from your kettle, the good old box radio delivers the bulk of live radio listening. Each of AM/FM and DAB enjoys 41% of listening (down from 44% DAB, 46% AM/FM last Summer).  Listening to radio via a smartphone/desktop/laptop or any TV set each have a share of 4%. Tablets have a 1% share.  When it comes to reach, yes, TV (11.5%) and smartphones (10.8%) do cut through, but it appears it’s not where the serious listening is done. 1.1% already listen to live radio on an Amazon Echo. 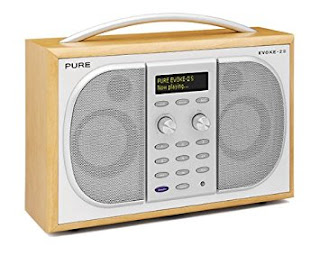 On devices, you can guess the demographic story. Whilst AM/FM/DAB boxes rules for adults generally, for 15-24s, their phone is bigger than either of an FM/AM radio or  a DAB set – but, taken together, the radio set is still bigger than the phone for that age band .

The picture is much the same for audience penetration amongst audio types. Radio reaches, as we know, around  90% of adults – with all other sources coming way down the chart; with 17% of folk using on demand music services; 27% playing digital music tracks; and 28% still playing their old CDs. Online audio/video clips are radio’s strongest contender, but only scoring around a third of radio’s penetration (31%).

The differences between the age groups are notable - and amplified usefully by Rajar. We’ve always known that younger demos listen to radio less; we just didn’t know too much about with whom they'd been unfaithful.

Contrast that with the latest main Rajar study which suggests that radio is now reaching an appreciably lower proportion of 15-24s - 83%, compared to 89% of all adults .  Loyalty, however, falls further, with 15-24s listening, on average, 35% less than all adults; and 25-34s 19% less.

Loyalty amongst all adults, incidentally, on that simple survey-on-survey comparison suggests, however, just a 2% overall drop in average time spent listening since Gordon Brown knocked Tony Blair off his perch. We remain much-loved. (*June 07 vs Mar 17, UK TSA,  Rajar/RSL, All radio)

Two things are stark: one is how strikingly resilient radio has been over the last busy decade across adults in general.  It reaches around almost the same percentage now (89%) as ten years ago (91%)'; and bounces around at about that figure. There are many industries who would kill for consistently enjoying almost universal consumption. 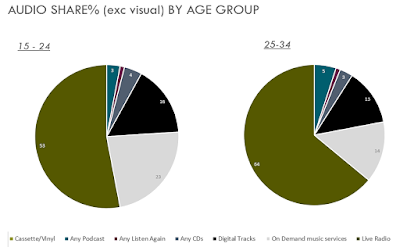 The second point is that, without doubt, the younger demographics do not adore radio quite as much as those age groups used to.  Whilst loyalty does still grow as we climb the demos, will today’s Centennials behave in thirty years as Baby Boomers now do? I doubt it.  You wouldn't punish an errant teenager by confiscating his radio.

It is easy to over-state this decline, and innocent onlookers annoyingly do, but it is a decline we must take seriously – and the efforts of Radio 1/Xtra/Kiss/Capital to keep radio sexy are an investment for us all.  (See JAMJAR for some good insight into habits amongst 4-14s).

The MIDAS data echoes the theme, suggesting that only just over half of eartime of 15-24s is now live radio, compared to 76% for all adults; with on demand music services accounting for almost a quarter of all such time from 15-24s, compared with 7% for all adults.  (What I cannot ascertain from the graphs Rajar have circulated is the relative size of cake for the demographics.)

The reach figures bear out the same theme, with on-demand music services now reaching 42% of 15-24s.

4.2 million adults (was 4.9m last Summer) use ‘listen again’/‘catch up’, mostly at home - alone.  18.9m people claim to have access to a bluetooth speaker or soundbar - and I suspect future studies will tell us more about the use of smart speakers. 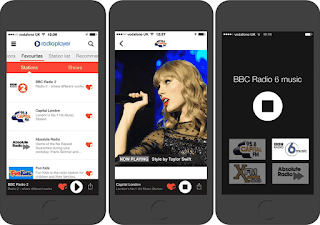 5.6m adults (4.3m last Summer) fiddle with a podcast weekly (around 10%), choosing to listen principally by smartphone; and a significant proportion of all podcasting hours may be attributed to middle aged blokes, listening in the morning on trains. I'm being a tad flippant, but if you study the graphs, my themes are sound.

What do people do when listening to the radio? Oh-er, Missus. They travel, relax, do chores. 1.3% determined folk even listen whilst shopping.They do stuff- or do nothing – to this great medium.

And – King MIDAS confirms that most people listen to radio - alone (53%) . I’d contest that the radio experience is always alone in your head. Ask any Heart listener to describe what's going on in their head as they hear Gary belt out 'Rule the World' - or ask two Radio 4 listeners to describe Ambridge.