I smiled when John Myers Tweeted that he had been booked to 're-open'  the refurbished Spar shop where he'd officially cut the ribbon twenty years before.  He'd probably been paid back then in Spangles.


When we get into radio, we dream of being booked to introduce our fave act on stage in front of thousands at the O2; but the truth is that the public appearances we do get invited to are a little more everyday.

Most radio jocks are now, quite rightly, seen by listeners as 'normal people'; rather than as uncomfortable  'cheap, local  mini-celebs', so even the invitations to 'open' local events don't flow in at quite the same rate nowadays.  In short, just not quite so many coffee mornings and Summer galas to open as there used to be.  Phew.

Peter Tait, rest his soul (Trent/Aire/Magic), often related the tale of one event he'd been asked to open, where he was paid live on stage in full view.  "Just before we go, we'd like to say  a  big thank you to Peter Tait. Thanks, Peter for coming.  This is from the committee'.  As the PA crackled, they proceeded to count out crisp tenners from a dirty envelope into Peter's hand, whilst still on-mic:  "Here you go. Five; ten; fifteen; twenty....'. Applause.

There was a memorable baby show I once judged on a steaming hot 80s Saturday. Never judge baby shows.  You make enemies.  The organiser hissed in my ear just prior to my announcing my finalists, demanding I pick a blend of colours and continents amongst my finalists.

My forsaking the L plates on my Ford Escort came late in life, so I'd arrive at gigs by taxi.  When duties were done, I'd wave like a star before running round the corner to hop on the bus home. I always felt uncomfortable taking the usual £25 Trent  expense payment, so often refused it.  By the time I'd spent a few polite quid on the  tombola, I was  usually out of pocket anyway. How can you take £25 when you know they're probably only raising £150?

And there was the police 'It's a knockout' I compered on the wettest day in history. Thames Valley Police v Leics Police.  In a bid to brighten up the proceedings, I was disparaging of all competitors throughout.  They took it in good spirit, until the end.  As  I made my final announcement, they nodded to each other and ran for me in a concerted terrorist attack.  Never try to escape from an entire police force.  Having caught me, I was lowered unceremoniously into one of the huge water obstacles.  I walked away from the event in a dirty old over-sized police track suit.

Isn't it frightening seeing women fight. I once opened a charity event in a pub in a less salubrious part of town: a rowdy 'do', where I had to shout to be heard.  In the absence of any stage or PA system, I balanced precariously on the two arms of an armchair to declare the event, such as it was, open.  Shortly afterwards some dispute erupted over by the trestle tables and I cowered in the corner as two women shouted, spat, slapped, thumped, hissed and pulled hair.

You get accustomed to having to organise events yourself. Whilst  some are beautifully choreographed, with a full briefing dispensed on arrival; others require that you take off your satin jacket with your name on - and turn into event manager. They have clearly given nothing any thought at all.  Similarly, they struggle to remember who you are and where you're from as they prepare to they introduce you.  On the luckiest occasions, they trouble to hiss quietly 'who are you again?' before grabbing the, usually faulty, mic.

Then, of course, the unreasonable requests. You've been asked to open a Summer Fete.  On arrival, you discover they want you to draw the raffle. In six hours time. There are seventy three prizes; and most winners have sensibly long since departed.

Not being a driver meant people gave me lifts home; or organised taxis.  I recall one afternoon after a  Summer's afternoon gig, waiting in the organiser's kitchen.  Being a well-brought up boy, after finishing my tea, I washed my cup.  The handle came off.  What do you say? And then, and this is 100% true, I waved farewell and got into the car which had slowed down outside. It turned out not to be the taxi I thought it was.  I know the listener still remembers, as she got in touch ten years later. 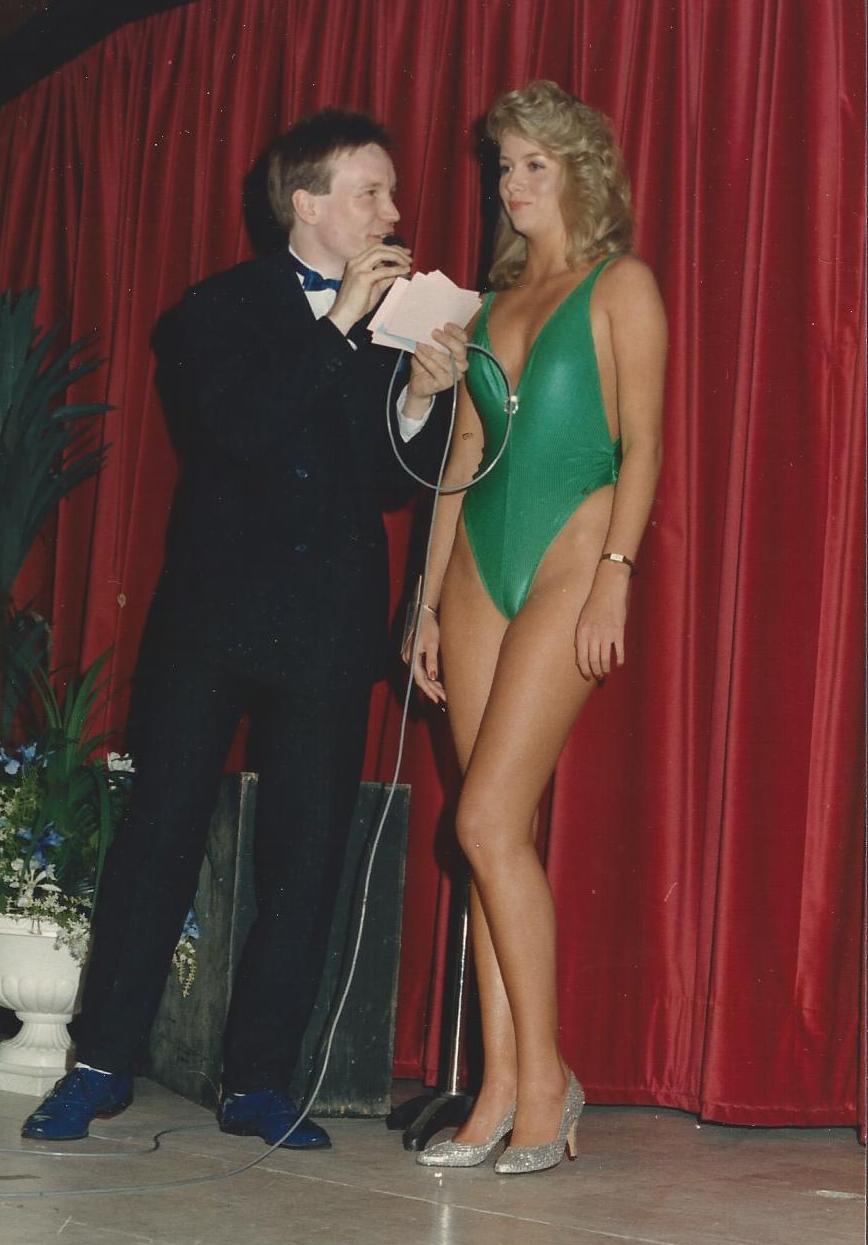 Don't remind me of compering Miss Radio Trent 1985. There I was in sparkly suit, with a blue-dicky bow and matching patent shoes, trying to lend a sense of occasion to the proceedings at Nottingham's Commodore International. That was the sort of venue where  orange fluorescent posters boasted all its on-stage musical acts as being 'the fabulous...'.  As I described the young lady's attributes, which had been usefully written down for me lest I not notice, her heel got caught in the hole between two of the stage blocks.  She fell over.  I laughed uncontrollably. She wasn't a happy beauty queen (not the one pictured).

Groupies too; some truly frightening (that's quite another blog altogether).  You get the one person who simply follows every movement in your life with alarming tenacity.  If you announce you'll be in a park in Arnold at 10.30, you know they'll be there at 10.00, armed with a carrier bag of dubious contents.  The innocent organisers, delighted to be getting enthusiastic  visitors, allocate them a front row seat.  If you are dismissive of the 'fan', you are seen as 'not very nice'. If you encourage them, well goodness knows what will happen.

Wish I could remember more about the dogs' fancy dress show I judged.

And what about Long Eaton Carnival?  They suggested they would fly me in by helicopter.  This was exciting.  This was the Big Time.  Not as it turned out, though.  On this grey windy day, after touchdown,  I descended from the helicopter, swaying and spewing.  This was not the Bay City Rollers arriving at a Radio 1 roadshow.