When you speak in the European Parliament, there's an embossed silver sign in front of you  saying 'speak slowly'.  I tried my best last week to do just that last week, when I honoured a welcome invitation by UK RadioCentre to speak in the European Parliament at the Association of European  Broadcasters' Convention.  The theme of the session was public service in commercial radio.

How reassuring it is that radio listeners the world over seem to behave the same.  The Irish and German contingents merrily reeled off tales of listeners who look naturally and immediately to their radio station to know the answers to any of life's questions. Anyone who's ever worked at the coal-face taking listener calls will know this to be the case.  If you want to know what time ASDA closes, erm, ask ASDA, not us.

I took the opportunity, naturally, to highlight the work of our own Free Radio team.  Last year, our West Midlands stations raised around £3/4m for local hospitals and related causes.  Surely one of the most significant fund-raising events in UK radio.  How great it is that around 20,000 listeners got out of bed on a Sunday morning to walk miles and miles for charity.  And what a great reflection of the relationship presenters have with their listeners that it was radio which persuaded them to do it.  Similarly, at our Gem 106 station last year, the Give It Up appeal persuaded listeners to relinquish a small luxury in life in favour of cash for the local hospital. Another £70,000 raised.

We're not the only ones.  My many friends across the industry too have given up their time through the years.  Help a London Child from Capital speaks for itself; and has branched out into Help a Capital Child.  The Have a Heart Appeal has already raised over £200,000 this year alone to make seriously ill children's wishes come true.  Similarly, Real and Smooth Radio recently presented a cheque for over £1million to the Help for Heroes charity after four years of fundraising. 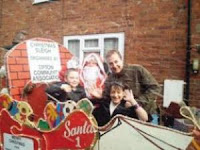 It's not just funds where radio helps.  I recall vividly the email  we received from a Black Country family, whose 42 year old mother was suffering from stomach cancer.  The worry was that Yvette would not live to see her favourite time of year with her family: Christmas.  The presenters were moved; as were the listeners.  Within days, plans had been laid by the station and its listeners to bring Christmas Day forward. Neighbours, friends and relations gathered with the presenters at her house as presents arrived, complemented by artificial snow, carol singers and a jolly Father Christmas.  Yvette died the following day. Radio had helped make her last moments as she wanted them.

It's easy to look at commercial radio as it grows and evolves, and suggest it's not the same as it was. It isn't.  But there is ample evidence that it still does enormous good.  We don't have to do charity appeals. But we do.  We don't have to work through the night to help listeners cope with the snow and school closures. But we do.  As I added a few school names to our online list at 1 am a few weeks ago, I mused that in some ways, with social media and online aiding the on-air effort, the quality and reliability of the service many stations provide in some areas is actually better than it has ever been.

As a radio-obsessed youth, I still probably spoke on-air to but a handful of presenters in the whole of the 1970s; and then only after dogged persistence. And I sent in scrawled postcards (or the back of a sealed-down envelope! Remember those?) for a few competitions. That was the level of my engagement.  It was all I could do.

Now, there is consistent dialogue night and day, by SMS, email and social media.  Listeners expect the person on the radio to talk back to them. Personally. Although radio itself may now be on a larger and often network scale, individual listener dialogue with presenters has never be closer.  That helps radio retain the beautiful trust it enjoys; and makes sure that when we call upon listeners to help, they do.