Gazing at the navel in W12 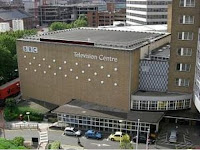 That's how @DeeeDoc described, on Twitter, the BBC coverage of its move to its stunning new premises in Central London.

There are those who, like me, who have a touch of sympathy with that view. No matter how much we love the BBC, its excellence and its rich history, one must concede that the Corporation is inclined to navel-gaze.

For days we've been treated to details of the last bulletin from TV Centre; the last programme; the last weather forecast; and so the list goes on. Everybody's been allowed a teary farewell. That's before we have the list of 'firsts' from the new home. And we even had Nick Higham (for whom I have much respect) guiding viewers round the new empire like a chirpy estate agent. I could have accepted, with ease, the odd smiley aside and a touch of reflection. That was thoroughly justified. But it just appeared to go on and on.

A typically beautiful package of TV Centre sepia memories had genuine integral value for the News Channel, but this, and its sequel, were followed by interviews in which much the same ground was covered. Can this depth and volume of coverage be justified?

This was a week in which Cypriots had monies stolen from their accounts. Like many Brits, I rather worried whether the same might happen to me in the UK. It was a budget week; and one in which the press were regulated more strictly than in living history. It was also one in which every parent related to the tragic story of the father and son killed on the mountain. And we reflected on what happened in Iraq exactly ten years ago. It was not a quiet news week.

We work in media. We are inordinately interested in it. We know that. We also know that our normal friends sometimes glaze over when we talk incessantly about a world we care deeply about. And they might gently suggest they are 'busy' when they know a night out with you and your 'media friends' is in prospect. So, when determining the news agenda, we must be aware that our finely-tuned news judgement filter has the potential to be flawed. Can we measure this 'TV Centre moving' story by our usual journalistic tests, and then honestly suggest it warrants such an extensive volume of coverage?  Is there a reason why any balanced appraisal of this huge public investment is absent from all reports?

Here's a test. Let's host a phone-in: "call us with your memories of and views about TVC" and witness the response. Especially if it's aired in, let's say, Newcastle, away from the media bubble.

Yes, there is a market for this expansive commentary. For us in the media, and people with a keen interest, we should be able to feast ourselves on this great achievement. Social media and online coverage offer a great place to do just that. Like many of us, I love seeing it there. 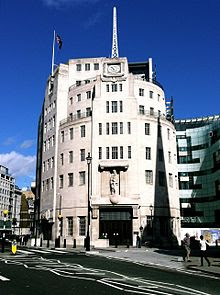 Maybe it's the same flaw which results in broadcasters talking so frequently about the 'studio' they are in, ignoring the fact that to a listener or viewer, the presenter is not in a studio, they are in every single home. The temptation for radio presenters to talk about their headphones, when there is a whole world outside to talk about. And the same reason that newsreaders apologise for the lack of 'VT'. Thank goodness radio journalists no longer have cause to explain  that 'the cart has gone down'. The language is alien: it's easy to forget that viewers and listeners do not live in our world.

Maybe I should concede some bias. I work in the commercial sector, and get a little annoyed when I see the BBC speak of itself where the merit is absent. Forgive me for tutting when the BBC TV announcers nod sagely and suggest I listen to 'my local BBC local radio station' late on a snowy night, even when I know the staff there have all gone home and yet some commercial radio is still broadcasting live and locally. And when the local BBC TV channel bothers to film a major commercial radio fund raising event yet misses any station credit. It's less likely to forget to mention any of its own initiatives.

The BBC loves to talk about itself in good times, and feels equally obliged to trumpet its less favourable escapades at equal length. That's a great shame for such a magnificent organisation. A touch more restraint in both chest-thumping and self-flagellation might be wise. And eminently sound journalism.