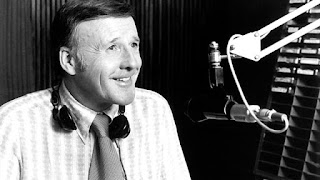 Presenters like to sing loudly with their headphones on.  Very few go on to huge chart success.

Jimmy Young did, hitting the 'top-spot' on the NME chart with ‘Unchained Melody’ and ‘the Man from Laramie’; and amassing an impressive string of other 50s favourites in the days when Number Ones sold millions.

He is best-remembered, however, for his radio. Hear, here, this unmistakable presenter, with his trademark Gloucestershire burr and catch phrases. He dominated daytime radio for decades, retiring reluctantly in 2002, aged 81, after 42 years at the BBC.


Jimmy had helped out in the family baking business, indeed he and his dad ended up in court when he was caught driving the family van in his early teens.

His first love throughout was music. His mother taught him piano and encouraged his voice training.

After a spell in the forces and as an electrician, a BBC producer spotted him playing piano at a swimming club.  Jim was duly handed his BBC Bakelite lanyard in August 1949.

His BBC career saw him hosting ‘Housewives Choice’ on the Light Programme for a few weeks in 1960, a successful run on weekend lates - and a few other offerings on Auntie's chill-out service. He was also to record  shows in London for the huge Radio Luxembourg.

The broadcasting break had come not a moment too soon, as the ballads for which he’d been famous gave way to dirty rock ‘n roll.

Jimmy went on to appear daily on the fledgling BBC Radio 1, by which time he was already older than Moyles was when he left. Jim hosted its mid-morning show, broadcast, at least partly, on both Radio 1 and 2.

'The JY Prog', as it became, migrated to a new home at Radio 2 in 73, with cautious programme management insisting that no interview begin until 15 minutes of the programme had elapsed. The programme's familiar sig tune, 'TownTalk' by Ken Woodman & His Piccadilly Brass, signaled the start of lunchtimes to 'seven and a half million housewives' in kitchens in the Home Counties.

The vari-speeded ‘What’s the recipe today Jim’ was as much a part of national radio folklore back then as Ken Bruce’s PopMaster is now.

Music-magazine programmes can work on radio, but only in the most capable of hands. Mixing real current affairs with jolly pop songs and chit chat is an art – and Jimmy had it - moving effortlessly from Carpenters to Cold War and colanders. The programme quickly acquired a reputation as the one politicians wanted to be on. In February 1975, Margaret Thatcher afforded her first interview as party leader to chirpy Jim.  JY’s show served huge audiences with insight into the issues of the day; albeit in a very different way from his successor, the excellent Jeremy Vine.

Little wonder his longevity in the national limelight and his reputation amongst those who matter earned him recognition at the Palace.  He was awarded the OBE in 1979, the CBE in 1993 and the Knight Bachelor of the Order of the British Empire in the 2002 Queen's New Year's Honours List for his services to broadcasting.

This gentleman broadcaster was a quiet, professional sort, who achieved huge audiences with a consistently successful radio programme for which he will be long-remembered.