Some of the session presenters at the very early TechCons used to remind me of those maths teachers in nylon shirts who'd use one of those old overhead projectors with their nice-smelling acetates.

On the contrary, today's well-attended conference boasted truly fascinating topics, each presented by a enviably gifted and informed communicator.

This is neither a technical nor an exhaustive account of today's TechCon, given I am not technical and I am exhausted.

As I pointed out from the stage, with the compère's hat on, this year's conference was independent of the Radio Academy, although my dear Academy remained supportive. A sort of soft Brexit, I guess.

The British Library, increasingly good friends of radio and audio kicked off. They'd commissioned a report on the future of radio, which was duly presented by Nicky Birch from Rosina Sounds. You can read it here. 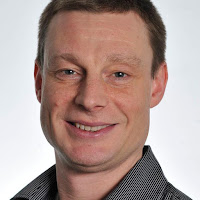 Dave Walters was up next from BBC Design and Engineering.  One of the best techies I've ever had the pleasure of working with. Having successfully managed to build radio studios fit for TV, he outlined how the industry might make them genuinely internet-fit. It's not just about an extra screen screwed to the desk. It's about recording all the inputs.

As Dave pointed out, there's a whole load of stuff happening at particular moments in the course of a live programme, such as the mic going live, which can be recorded alongside the audio. If the whole 'object' can be saved rather than just an audio stream, you can then mix it later for whatever purpose you wish.  It can also spit out a transcript, indication of junctions, and loads of useful other metadata. My programmer's eye imagined the value of being able to isolate elements of a programme so efficiently. It's an impressive concept - now being trialled in the BBC's pilot internet-fit studio at BH.

Last year, we heard how radio fought against the odds in strife-torn South Sudan. Delegates recalled the battle-scarred satellite dish with its bullet holes. This time, the message from Issa Kassimu from Internews was positive, with a full account of how they'd managed to solar power a radio station. Not a bad idea when you've loads of sun and no fuel.  Issa insisted it would work here too; and one delegate reminded us of a TV mast in Scotland which calls upon that very power source.

Tony Churnside, head of Technology for Magnetic North headlined his KTN report on audio innovation; and his colleague reminded us that funding for audio R & D is available. But it transpires few applications are received for radio/audio funding. Let's change that. 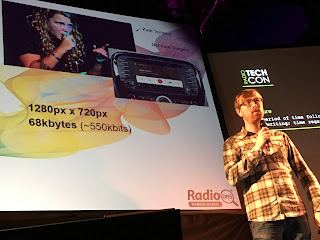 In-car. The infuriatingly knowledgeable Nick Piggott was joined by the irrepressible Mike Hill from Radio Player and  CharlotteSimon from BBC MCR. They acknowledged that in-car entertainment was pretty simple once hybrid radio was installed, with layers of IP info layered instantly on the broadcast signal.

The posh car manufacturers are apparently becoming a little concerned that their bargain cousins could so easily access the same level of in-car audio experience. There was a lovely visual too, from a Ted talk showing how driver-less cars could be driven easily at high speed through complex junctions provided that every vehicle was computer controlled. One manual 'old granny', it was pointed out, would not last long.

When Sound Digital won the second national commercial multiplex, it was clear that a number of of new stations would require studio facilities. And quickly.  Neil Sedley from Wireless Group International explained how they managed to squeeze the new studios into their existing building, and create a performance space, as befits Virgin. 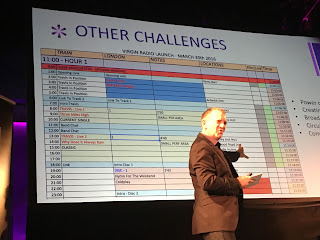 Some tenants were moved out; the poor CEO's office got moved to the back; and the canteen was depleted.  Impressively moustached Neil confessed the sort of headaches we all encounter with major projects: the studio door manufacturer went bust, and the tenants happened to be on a six month notice period. All went well though, and though he would only smile when I asked if it was all on budget, I gather the total amount was impressively low and he'd kept to budget, bar the shouting.

Staying with Virgin, later in the day, we heard the tech tale of the station's launch OB - from a Virgin Pendolino train. As you might expect, the idea appears to have emerged from a drink-fuelled occasion, and the train loan was negotiated thanks to help from the very bearded top of Virgin.

Phil Critchlow told the story. 3G and 4G was used, through the twelve aerials on top of the train. I admired the forethought - there was a full trial run, which was no mean achievement given the route was atypical and had to be rehearsed in full - through the night.  Virgin wisely had insisted on such a broadcast trial before committing. Clearly there were some dodgy patches of reception, but once identified specifically in the dry-run, the programme running order could be scheduled round them. I so, so admired the forethought here, at a level alas too often absent from too much British radio. 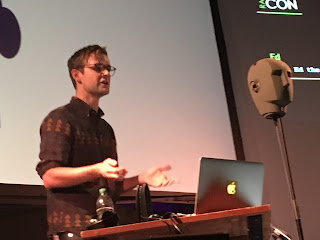 Chris Pike from BBC R & D is a genius. His immersive sound demonstration was thoroughly engaging as we sat in our special headphones. Chris explained with the aid of his dummy 'Ed', with microphones duly installed in each ear, how the effect simulates the effect of a head listening, with its two ears separated by, well, a head.

This stuff is important for radio to consider - as more listening is done using headphones and current trends suggest that almost 1 in 10 households will have a VR device by Christmas. He explained some of the challenges, not least the thought of a chap trying to mix the sound element to a piece of VR when he can't see the keyboard as he's got his VR goggles on.

'It's just a fucking app', proclaimed a confident Tom Bartindale from Open Lab at Newcastle University, as he explained how the team had provided radio for migrant camps through one-to-many phone-based systems. The source 'studio' end was just one person with a smartphone equipped with an app which could handle incoming contributor calls and any other relevant incoming information. He even illustrated how the incoming callers could choose their topic from a list, avoiding the need for producers to intervene. And, if you really did want a 'producer' to intercept the calls to the programme first, they could easily join the 'broadcast' chain. 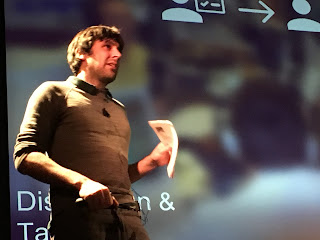 That was fascinating, and dreamt up by someone who conceded 'I'm not one of you'. From the outside of our industry, he'd delivered a stream of rich speech content which could easily be a 'radio station'. As BBC local radio considers its sustainable future, I hope it looks at models like that as a thought starter.

He also dubbed the usual call vetting producer-processes at traditional stations 'triage'. I'd not heard that medical phrase used in quite that way before. It's very good.

Not many jocks hit the news on time nowadays. That annoys me. As does hearing but half of Bohemian Rhapsody.   But problems with timing have far more serious implications around the world when universal time and GPS differ. Satellite implications too, as clocks closer to a massive object, like the Earth, tick more slowly than ones further away. If all aeroplane landings are to be automated, timing needs sorting. Egnos is the answer. Thought I'd reassure you. 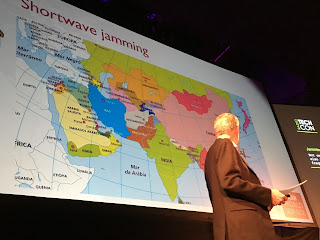 I adore the World Service.  But Kim Jong-Un likely doesn't, as the BBC prepares to add  the North Korean peninsula to its ambit. New languages and services are being bolted on to our overseas efforts on a scale not seen since WWII. Some overseas governments are accordingly none too keen on Auntie, and similar external broadcasters, and the list of countries jamming her is interesting. The tale of international cat and mouse sounded like Ofcom vs the pirates on a London housing estate. Thankfully, the BBC had clever answers.

I often dictate texts and short documents - and my phone seems pretty damn good at understanding my waffle. Clever Doctors Cleo Pike and Amy Beeston offered some fascinating insight into 'machine listening', that is systems like Siri and Alexa. But also there are systems which take some learnings from how our ears themselves work. It seems that our lugs are pretty clever at filtering out confusing noise almost before sounds start to be processed fully by the brain. The brain also takes context and acoustics into account. If machine listening could be as canny as our ear-hole, we're sorted.

'Machine listening' is clever stuff, not only hearing what we say, but the prosody of how we say it, even inferring meaning as to how well people get on by how they interject and engage. This was simply a fascinating session. 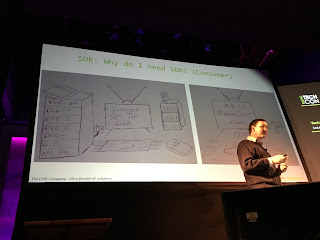 Software-Defined Radio was covered off by the endearing Danny Webster from Lime Microsystems who really ought to get himself a YouTube channel with his understated effortless boffin humour.

SDR is something which has been around some time, but it's clear that in a fast changing world, software you can update is better than hardware you can't.

He'd even troubled to draw a scribbled pic of his front room with all its sound and visual entertainment gadgets, imagining one piece of software-defined gubbins which could be re-programmed with ease as new sources emerge. There was mention too of how you might read next door's electricity meter, but for the life of me I cannot recall why it was mentioned, and why anyone would wish to do it. He reminded us too that projects such as this are largely passion projects driven by retired engineers who then inconsiderately go and die.

Concluded by a round up from BFBS's Dave Ramsay, this was a brilliantly informative and fascinating day in a wonderful quirky theatre - one which had opened as radio itself was beginning.

From my wobbly seat, I found it the best TechCon yet. Huge congratulations to Ann, Aradhna and Andy for pulling it together at their own risk with their various committee members, helpers, supporters - and key sponsor, Broadcast Bionics.

Spread the word, and if it returns next year (which I hope it does), do book a ticket.

Anyone in programme management who does not take an active interest in the tech side of our great industry risks being left behind these days.

If I've messed up anything techy, please let me know