Conversations - The Story of a Series 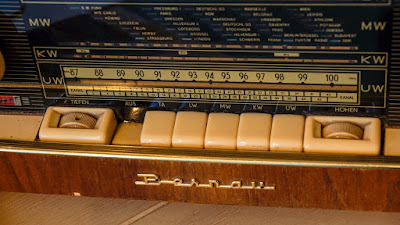 The news of Terry Wogan’s death, so soon after the loss of Ed Stewart, focuses the mind.

Whilst we know that some broadcasters can continue happily on air until their 90s, we have started to wave farewell to some of the great names of our wonderful medium.

If heaven had its own multiplex, they’d likely now have to consider a celestial Ofcom to work out just how to squeeze on so many incredible programme streams.

I see radio in three eras. The first era being its discovery and dominance before the TV in the corner muscled in; and the third being our current exciting digital era.

Between those lay a fond, busy second era when the medium diversified into pop and pirates, targeted national BBC radio, BBC local radio and ‘’ILR’ commercial radio. A medium of 45s and CDs, FM becoming dominant, disc jockeys becoming celebrities, the birth of 'the brand' and radio becoming a fully-fledged UK advertising medium.
That second era gave rise to some vividly colourful characters both on and off-air.  One looks back and wonders quite how we managed it all. Some people had innate talent which the blossoming medium thankfully amplified; others of us were just in the right place at the right time to enjoy a hell of a ride.

For good and for ill, life in radio will never be quite the same again. Not worse or better – just different. The digital future will see pioneering developments and huge excitement; and those involved will, in time, be able to look back fondly at their own period, as radio found its new place in people’s lives.

For now, though, I felt a need to bottle the second era and capture the recollections of its characters. For us, and for posterity. This is our legacy.

That thought generated the ‘Conversations’ series. Hour-long programmes in which key characters in a range of radio roles reflect candidly on their own lives. Those tales tell a story of the medium itself through the last sixty or so years.


The subjects gave their time generously - and opened up candidly. Mark Goodier tested his mic for level, but then, as the recording rolled, he wisely threw off his cans to chat.  He knew exactly what I wanted.  The real Mark, talking to a friend.  'Conversations' is about authenticity, not performance.

Few of us have steered through our professional and personal lives without any dark periods.  Tom Edwards painted a fond picture of his pirate and Radio 2 days, but was similarly open about his battle with the booze and how close to death it bought him, before he regained control and lived to share his tale usefully.

Ralph Bernard is still a busy man, even though he’s no longer running the largest commercial radio group, so I was flattered he gave up his time to chat. Given he’d just bought a new London flat, we sat on white garden furniture in his front room as he reflected. I was amused that he was so keen to make clear some points which he felt the industry at large never quite understood at the time. I'd be just the same.

Helen Boaden was deliciously frank and typically charming, and I was seething when some prat national press journalists took a few words out of context. The fact that they described her ‘speaking on national radio’ suggests they know as little about radio as they do about everything else. She is worth a hundred of them.

Having been one of so many who sent audition tapes in a Jiffy bag to Johnny Beerling, it was delight to spend an afternoon reminiscing in his sunny Yorkshire garden; and Nicky Horne similarly tempted me  into his London garden as we chewed over those early Capital days.


It’s interesting too hearing the same story from different angles. The Classic FM provenance has a number of different flavours.  ‘Conversations’, however, does not set out to challenge. It simply seeks a single perspective honestly expressed, at suitable length, through a single pair of eyes.

How fascinating to  acknowledge that some of these individuals reach back to the medium's very beginnings as they recall listening on a home made crystal set. And what a privilege to chat to 95 year old Teddy Johnson, formerly of Radio Luxembourg. From his nursing home, he recalled how the idea of a top 20 was first floated to him. What? Play all the current songs back to back? Kicking off the show with the last popular? It'll never catch on.

Thanks for the feedback. I’m so touched by the Tweets, DMs and emails. Notes arrive daily, not only from those who know the people or the period involved, but those who say ‘I wasn’t around in those days, and it’s so good to hear what it was like’.  Many busy radio folk saying the series is a welcome distraction from long dull car journeys.

I must thank too the handful of people who’ve offered to ‘do me’. Maybe one day; but I feel my days pale into insignificance as I chat to these titans. 37 episodes are in the can, with many more pencilled in. Enjoy.


Conversations is available on this Audioboom playlist. The programmes also feature in the #radiomoments podcast feed, alongside other material. New episodes appear around fortnightly. Episodes are also aired on Sunday nights at 10pm on in-Radio, and repeated through the week.